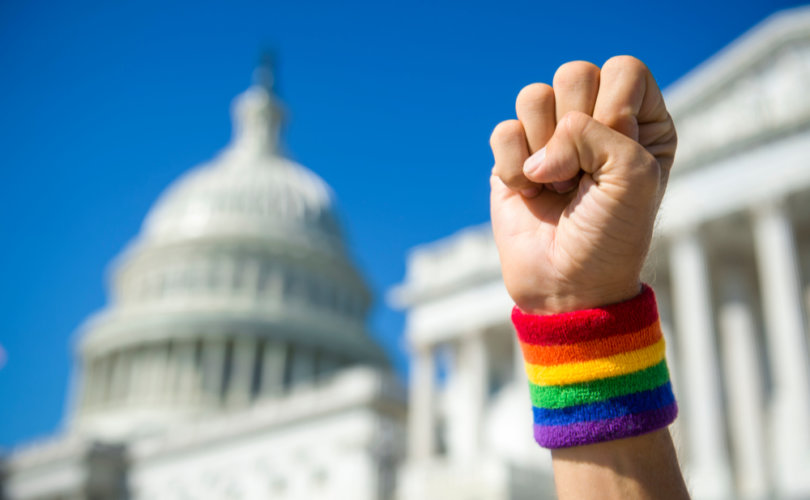 Homosexual symbolism outside the US CapitolShutterstock

WASHINGTON, D.C., February 18, 2021 (LifeSiteNews) – The U.S. House of Representatives is scheduled to vote next week on radical pro-abortion and pro-LGBT Equality Act.

The act, which was passed by the Democrat-controlled House in 2019, but blocked by the Senate then controlled by Republicans, would amend the 1964 Civil Rights Act to include “sex,” “sexual orientation,” and “gender identity” among expressly recognized “non-discrimination” categories in “public accommodations,” which would also be expanded to include many additional types of establishments including recreation, shopping, online retailers, healthcare services, and more.

It would also force anyone employing 15 or more people to recognize people’s claimed “gender identity,” forbid employers from “discriminating” based on “sexual orientation” or “gender identity,” and mandate transgender “access” to opposite-sex restrooms, locker rooms, and dressing rooms.

The United States Conference of Catholic Bishops (USCCB) released a document this month which lays out the “adverse impact on existing provisions that prohibit the use of federal funds for abortion” which could be brought about by the implementation of the Equality Act. If successful, the bill could use coercion to force taxpayers to fund abortion and even make doctors, nurses, and faith-based hospitals perform abortions.

In accordance with President Joe Biden’s firm promise that the act’s passage would be “the first thing I ask to be done,” he has prioritized the bill for consideration by the Democrat-controlled Congress. Given the bill’s prior success in the House, it is expected to pass.

House Majority Leader Steny Hoyer (D-MD) announced that the act would make its way to Congress next week in a letter to his colleagues: “Other legislation coming to the floor next week are two bills that passed through the House last Congress: a wilderness package and the Equality Act, which will end legal discrimination against LGBTQ Americans.”

Hoyer told the Washington Blade that the act requires immediate attention: “I was proud to bring the Equality Act to the House floor last Congress, and pleased to see this critical legislation pass with strong support,” he said. “It is imperative that we move this priority swiftly to advance the cause of equality and ensure our laws recognize the equal rights and dignity of LGBTQ people in our country.”

Over a year after the Equality Act was passed by the House, Senate Republicans shot the bill down in June, with Sen. Mike Lee (R-UT) remarking that, contrary to the suggestion of the bill’s name, the so-called Equality Act does not take care “to ensure that religious employers will be treated fairly.”

“We need to be mindful of the need of a religious employer to maintain its doctrine and teachings, not only in the hiring of its ministers,” said Lee, but also for the sake of “others who look to that religious institution’s teachings, in the way they live their lives, in their beliefs, and in their willingness to teach those things to others.”

“This legislation doesn’t do that,” Lee declared at the time.

Speaking at a press conference in 2019 on the move to pass the Equality Act, President of Family Research Council Tony Perkins blasted the bill as “unfair on many fronts,” dubbing it the “Inequality Act.”

“It is an attack on parental rights, women’s sports, but to the millions of people of faith in this country, it is an egregious attack on the freedom to believe and live according to those beliefs,” he said. “It would position the government to lord over churches and other faith-based institutions, dictating potentially who they hire, how their facilities are used, and even punishing them for not falling in step with a view of human sexuality that directly contradicts orthodox biblical teaching.”

“No institution or person of faith be it school, church, synagogues, mosque, business, or non-profit will escape the Orwellian reach of the Equality Act. The Religious Freedom Restoration Act will be committed to the ‘memory hole,’ and we will then experience a catastrophic loss of religious freedom in America, and, as a result, every American, those who believe and do not believe, will suffer the consequences,” he concluded.

The act could face a similar backlash in the Senate this time around as it did in 2020, with Senate Republicans coming out in opposition to the bill. A spokesperson for Mitt Romney (R-UT) told the Blade that “Senator Romney believes that strong religious liberty protections are essential to any legislation on this issue, and since those provisions are absent from this particular bill, he is not able to support it.”

There may even be some backlash from within the Democrat Party, as last year Sen. Joe Manchin (D-WV) declared his negative view on the act in a statement saying he was then “not convinced that the Equality Act as written provides sufficient guidance to the local officials who will be responsible for implementing it.”

Currently, the Senate is split 50-50 Democrat and Republican. In the event of a tie-breaker vote, Vice President Kamala Harris will cast the deciding vote.

LifeSiteNews spoke with Charlene Cothran, previously the publisher of the internationally distributed homosexual rights magazine Venus. Cothran, an African American, practiced a homosexual lifestyle for some time herself. She said that the Equality Act “has very little to do with equality,” and in no uncertain words criticized the bill as “a purely evil act of deception.”

“The bill attempts to turn biological and biblical truth into a Grand Lie and their Grand Lie into law,” she stated, adding that she is “deeply offended that homosexuals and so-called trans activists have fully hijacked the African American Civil Rights movement for selfish, dangerous, deceptive purposes.”

“Sadly, the so-called Equality Act will only guarantee that parents, children, teachers and churches are deceived into believing that homosexual and trans ‘studies’ are scientifically accurate and respected by medical professionals. All of their so-called ‘studies’ are politically motivated.”

“So-called transgender activists need to stop lying to Americans and to the world,” Cothran continued. “They are racist at their core. They push power-hungry Black activists out front and pay them to do their filthy work.”

“Plainly stated, their goal is to become God,” she summarized. “They seek with this evil bill to eliminate God-ordained and God-assigned gender norms and language, which they know is impossible. Biden’s number one agenda is this evil act. We warned our Black families and churches about this day. Now with the Dem’s trifecta control of White House, House and Senate, it may sadly be too late.”