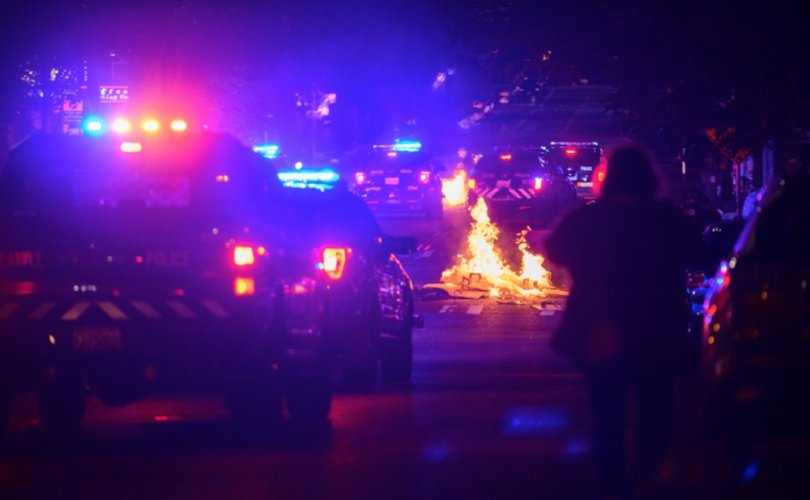 September 22, 2020 (LifeSiteNews) – The US Department of Justice (DOJ) has formally named the Democrat-run cities of New York City, Portland, and Seattle as having neglected their basic duty to protect their residents by tolerating Black Lives Matter (BLM) riots, putting the federal aid money they receive at risk.

Those three cities “have permitted violence and destruction of property to persist and have refused to undertake reasonable measures to counteract criminal activities,” the DOJ declared in a press release Monday.

In New York, shootings “have been on the rise since looting and protests began on or about May 28, 2020” (a 177% increase in July from the year before, and a 166% increase in August from the year before); prosecutors in Manhattan, Brooklyn, Queens, and the Bronx refused to prosecute crimes stemming from the protests; city and state leaders “have forcefully rejected federal law enforcement support”; and city leaders “cut $1 billion from NYPD’s FY21 budget” during a time of “increased unrest, gun violence, and property damage,” causing “cancellation of the new police recruiting class, cuts to overtime spending, and the transfer of certain police functions, including school safety, out of the NYPD.”

Portland, the DOJ continued, has seen “100 consecutive nights of protests marred by vandalism, chaos, and even killing,” including arson, injuries to police, and a 140% spike in shootings from the previous year. Amid it all, the city “cut $15 million from the police bureau, eliminating 84 positions” including the Gun Violence Reduction Team and emergency response personnel,” and Mayor Ted Wheeler also rejected federal law enforcement assistance.

And in Seattle, officials notoriously “permitted anarchists and activists to seize six square blocks of the city’s Capitol Hill neighborhood” and renamed it the “Capitol Hill Autonomous Zone” (CHAZ) or “Capitol Hill Occupied Protest” (CHOP). Police were “ordered to abandon their precinct within the CHOP,” leading to a 525% increase in crimes such as homicide, robbery, and assault. While all this was going on, city and state leaders also refused federal law enforcement.

“When state and local leaders impede their own law enforcement officers and agencies from doing their jobs, it endangers innocent citizens who deserve to be protected, including those who are trying to peacefully assemble and protest,” US Attorney General William Barr declared.  “We cannot allow federal tax dollars to be wasted when the safety of the citizenry hangs in the balance. It is my hope that the cities identified by the Department of Justice today will reverse course and become serious about performing the basic function of government and start protecting their own citizens.”

Earlier this month, President Donald Trump directed the DOJ to review which localities were tolerating anarchy for the purpose of reassessing whether they should continue to receive federal aid, to “ensure that Federal funds are neither unduly wasted nor spent in a manner that directly violates our Government’s promise to protect life, liberty, and property.”

The Justice Department’s review is ongoing and is expected to add more cities to its list. Last month, for instance, the Austin City Council in Texas unanimously voted to cut $150 million from the Austin Police Department and redirect it to “social services” including abortion.