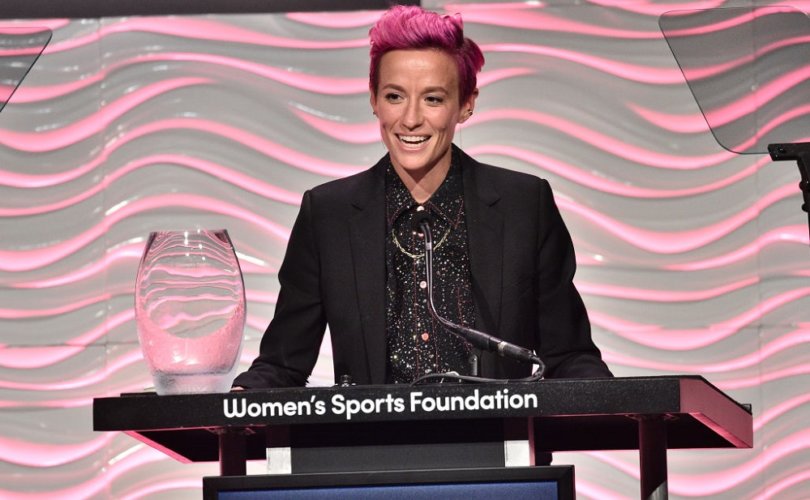 According to the new rules set out by the International Olympic Committee (IOC), athletes at the games will not be allowed to kneel or make political hand gestures while participating in sports. In addition, the IOC is barring any display of disrespect during medal ceremonies.

Examples of breaking the rules provided by the committee include “[d]isplaying any political messaging, including signs or armbands, gestures of a political nature, like a hand gesture or kneeling, refusal to follow the Ceremonies protocol.”

Rapinoe, a captain of the U.S. National Women’s Soccer Team, stated on Friday on social media, “So much being done about the protests. So little being done about what we are protesting about. We will not be silenced.”

Megan Rapinoe responds to the IOC banning protests at the Olympics: “We will not be silenced” pic.twitter.com/69PljKC8u5

Rapinoe, 34, sparked controversy in 2016 when she knelt during the U.S. national anthem in solidarity with pro footballer Colin Kaepernick, the San Francisco 49ers quarterback who refused to stand during the anthem to protest racial injustice. She said at the time she planned to continue to kneel and probably never sing the anthem.

In 2017, the U.S. Soccer Federation passed a policy requiring players to stand respectfully during the anthem; the U.S. Women’s Soccer Team also adheres to this rule. In June, Rapinoe stood silently rather than sing the anthem after her team beat Thailand and Chile. Rapinoe said she would refuse to visit the White House if her team were to win the World Cup. When the team eventually won the tournament, it accepted an invitation from Congress rather than go to the White House.

When contacted by LifeSiteNews, Dr. Jennifer Bryson, a visiting fellow at the Hudson Institute, a Washington, D.C. think-tank, applauded the IOC for trying to protect sports from being used as a political platform. The scholar said in an email response, “Look at the history of the Olympics in ancient Greece: there was an ‘Olympic Truce’ during the games so that all the athletes and spectators from many different cities could come. Keeping political fighting out is what made it possible for people to come together for sport.”

Dr. Bryson said she opposes what she described as “Rapinoe’s push to make the political primary, over sports, during the Olympics.” According to Dr. Bryson, Rapinoe and like-minded social justice warriors “should respect the Olympic Truce.” Saying some fans are turned off by the way Rapino has politicized the sport, Dr. Bryson said: “She should not now be allowed to ruin the Olympics too.”

Dr. Bryson is the founder of LetAllPlay.org, which has called on FIFA — the international association that governs professional soccer — and other sports organizations to prohibit political expression, including the LGBT rainbow symbols, on playing fields.

She told LifeSiteNews, “Today sports are one of the few shared civic spaces we have, where we can all come together and enjoy a game no matter our differences.” Saying this is important for children, who benefit from training their bodies as part of a team, she added: “Rapinoe is providing children a poor role model of sportsmanship.”