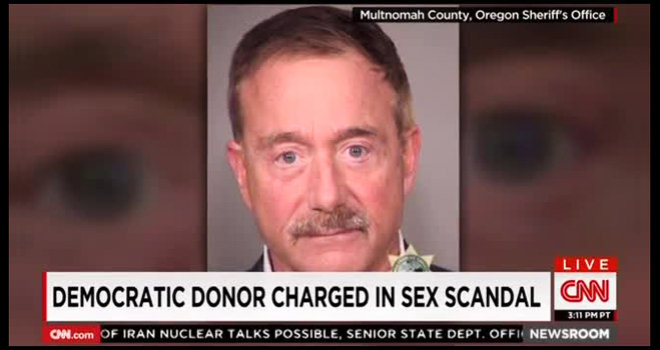 Terry Bean has made media and political waves as a co-founder of the gay “rights” group Human Rights Campaign (HRC) and a major fundraiser and bundler for President Obama and other prominent Democrats.

He has been a hugely influential figure in the Obama administration’s decision to change how the federal government looks at marriage. Changes include a statement by U.S. Attorney General Eric Holder that state Attorneys General could ignore state marriage amendments, an Executive Order in 2014 that gives LGBT Americans the same worker protections as women and racial minorities for federal employees and contractors, and the elimination of single-sex classrooms and schools if they receive federal funding.

Additionally, the Obama administration has declared that Medicare funding can be used for transgender surgeries.

Given this influence, you might expect U.S. media to intensely focus on the dramatic legal proceedings that have taken place since November, when Bean was charged with the sexual assault of a 15-year-old boy. Bean, 66, and his 25-year-old ex-boyfriend broke up in a dramatic and violent fashion earlier this year, and both were arrested in relation to the alleged assault.

What should make this even juicier to the normally salacious American media is that Bean says he was set up by his ex-boyfriend, Kiah Lawson, while Lawson says Bean secretly set up a camera to observe Bean’s sexual relationships with multiple men, including Lawson.

Bean, who says the alleged set-up included extortion, pled innocent on December 3 to two felony charges of third-degree sodomy and one count of third-degree sex abuse, and faces a court date in January. But except for a few mainstream and gay-oriented websites that ran initial stories, coverage has been largely limited to local Oregon media and conservative outlets.

Dan Gainor of the Media Research Center told Crisis that the glaring omission of reports about Bean show that “the worst examples of bias are almost always about what journalists choose NOT to report.”

“Bean was a top Obama fundraiser charged with a serious crime. He flew on Air Force One. Yet he netted zero coverage,” said Gainor, who contrasted coverage of Bean with how “in just two days, the broadcast networks spent over 14 minutes covering how mid-level congressional staffer Elizabeth Lauten criticized the Obama daughters.”

As blogger Michelle Malkin noted in her column two weeks ago, the silence is deafening.

And there is no excuse. Beyond the disturbing drama surrounding the arrest, Bean is a prominent name in U.S. politics who helped raise more than $500,000 for Obama during his two campaigns. Likewise, HRC is probably the most influential gay “rights” organization in the world. What they want drives the national conversation as well as federal and state laws. Earlier this year, they put out an international “hit list” of groups they say harm the gay agenda, which two pro-family advocates say led to death threats and other targeting by gay activists.

Since Bean’s arrest, his name has been scrubbed from the HRC website, and he has stepped down as a member of HRC’s board of directors. But his tremendous influence remains, as the gay agenda continues to batter down the doors of Catholic and other religious institutions, as well as states across the nations.

While Indiana has a law protecting marriage as between a man and a woman, a federal court ruled the law was unconstitutional. More than 20 Jesuit universities have said they will also follow state laws on providing benefits, rather than fighting to retain their Catholic identity on the issue of human sexuality.

HRC’s sphere of influence is seen not just in changing public policy on marriage, or higher education policies on benefits, but also with regards to immigration, bullying in grade school, and so-called “non-discrimination” laws in states and localities across America.

Yet media coverage was scant at the outset of the arrest, and has been even more sparse since—a classic case of media bias. As Brett Decker pointed out, “if one of President George W. Bush’s bundlers would have been charged with child rape, make no mistake about it, the media feeding frenzy would have been uncontrollable—which would be legitimate given the severity of the allegation. The silence surrounding Terrence Bean exposes the national media’s partisan double standard in obscene detail.”

National Organization for Marriage president Brian Brown was likewise critical of the lack of coverage, noting that Bean’s influence should have netted far more notice.

“The scant coverage of Terry Bean’s arrest is an example of media bias,” said Brown. “Mr. Bean is accused of being a pedophile and child rapist. He co-founded the Human Rights Campaign, is on their Board of Directors and is one of the top gay activists in the nation and a close political ally of President Obama.”

Brown and Decker are right. It’s not just Bean’s relative fame, or the salacious details of the arrest, the accusations, the videotape, etc. It’s also the very simple fact that Bean’s advocacy has had tremendous political, policy, and cultural implications for America and the world, as has the advocacy of the organization that he co-founded.

Unfortunately, in the days leading up to Bean’s December 3 court appearance, the media chose to aim its guns at the former communications director of a little-known Member of Congress who criticized the appearance of the Obama children at the annual turkey pardon. In addition to reporting on the staffer’s comments, major media outlets went through her juvenile records, her college writings, and visited the home of her parents.

Not a word about Bean, though. Press concern over rape seems to extend only to cases where their political biases are affirmed, as in the recent allegations directed at a University of Virginia fraternity house in a now-discredited Rolling Stone article. But when Democrats commit rape, it’s barely worth noticing by the fourth estate.

This article first appeared on Crisis Magazine and is re-published with permission.