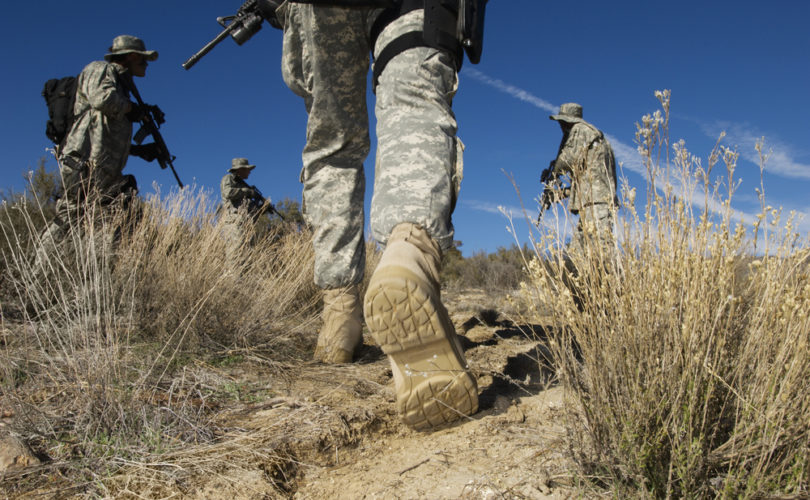 March 27, 2015 (LifeSiteNews.com) — They may not be saying so publicly, but behind the scenes, U.S. military officials are highly critical of the Obama administration’s push to allow people who identify as “transgender” to join the service, reports the Associated Press.

Speaking on condition of anonymity, sources close to Defense Secretary Ash Carter told the AP his most senior advisers had expressed “serious reservations” about making accommodations for self-identified “transgender” individuals who claim their mental and emotional gender does not match their physical sex.

Currently, transgender individuals are banned from serving in any branch of the U.S. military on the grounds that gender dysphoria (the medical term for transgenderism) is a serious psychological condition considered incompatible with military service.  As a result, coming out as “transgender” is grounds for an immediate medical discharge.

Until recently, any senior officer could expel a service member under his or her command upon discovering the service member suffers from gender dysphoria.  But last month, the Army issued a memo indicating that such expulsions may soon require approval by a civilian administrator chosen by the president.  Additionally, multiple Pentagon officials have stated that the ban on transgender troops is likely to come under review soon, with an eye toward discarding the ban completely.

Secretary Carter has said he is “very open-minded” about allowing transgender individuals to serve, and told reporters and troops in Afghanistan, “I don't think anything but their suitability for service should preclude them.”

But according to the AP, top military leaders are deeply worried about the long-term ramifications of reversing the ban on transgender troops, especially questions of appropriate housing, bathroom, and shower arrangements.  As the military struggles to deal with the already alarmingly high rate of sexual assault among troops, allowing biological males to share sex-segregated private spaces with females and vice-versa is seen as potentially throwing unnecessary fuel on the fire.

The AP’s sources also said Pentagon officials are concerned that allowing transgender troops to serve openly could have a negative impact on unit cohesion and readiness.  In particular, Pentagon brass are concerned about whether accepting transgender troops will mean the military – and by extension, the taxpayers – will be forced to pay for elective sex change surgeries and hormone treatments for these individuals, which can cost upwards of $60,000.  The surgeries carry serious risks and require significant recovery time, and in the case of male-to-female sex change procedures, the treatments by design leave recipients physically weaker and more vulnerable than before.  They often include silicon breast and/or buttock implants, which carry additional long-term risks.  All of these factors have the potential to significantly impact troop readiness.

The question of the military’s treatment of transgender individuals has come to the forefront in recent months due in no small part to the demands of one of its most famous prisoners, Bradley Manning – a former Army specialist convicted of leaking hundreds of thousands of classified documents during the 2010 Wikileaks scandal.  The day after Manning was sentenced to 35 years at the infamous Fort Leavenworth military prison, he announced he identified as a female, and requested that both the military and the public at large refer to him as “Chelsea.”  Soon after, a judge granted his request for a legal name change.

Manning later sued the Pentagon, insisting the military pay for a sex change surgery and drugs, allow him to dress as a woman, and transfer him to a women’s facility.  At first, the Army refused all of Manning’s demands, stating bluntly, “The Army does not provide hormone therapy or sex-reassignment surgery for gender identity disorder.”  But as the lawsuit heated up, they offered a compromise, agreeing to provide hormone treatments as long as Manning continues to observe the male dress code for his own safety.

The Army’s compromise echoes the approach of the Department of Veteran Affairs (VA), which already pays for sex change hormones and other non-surgical treatments for retired and honorably discharged troops who identify as transgender.   Currently, the VA is prohibited from directly funding sex change surgeries, but some of the veterans it treats are covered by Medicare, which was ordered by the Obama administration to begin offering the surgeries last year.