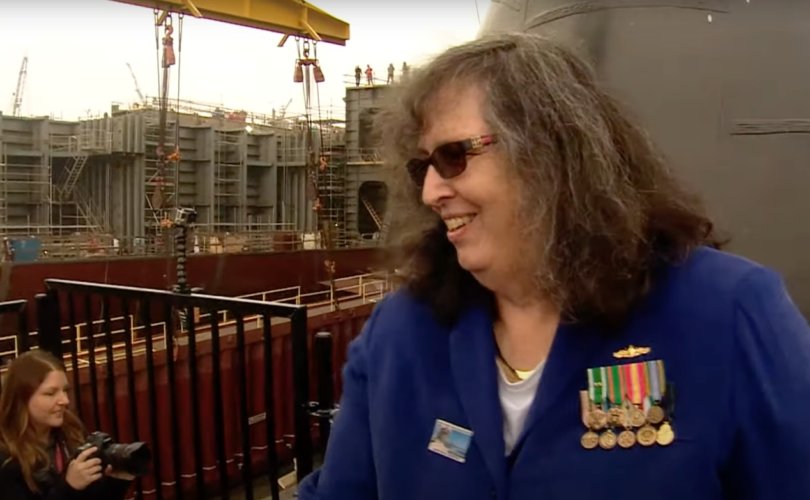 SAN DIEGO (LifeSiteNews) — The U.S. Navy christened the USNS Harvey Milk, named after the murdered San Francisco supervisor who made history in the 1970s as the California’s first openly homosexual elected official.

The person chosen for the time-honored tradition of breaking a bottle of champagne across the ship’s bow was a gender-confused man who calls himself ‘Paula,’ a 1985 U.S. Naval Academy graduate who currently serves as Clinical Program Director of the Johns Hopkins Center for Transgender Health.  The surreal christening can be seen here:

The USNS Harvey Milk “will carry a rich legacy of civic leadership,” said U.S. Sen. Dianne Feinstein (D-Calif.) said in a letter read at the ceremony.

The Navy, in conjunction with General Dynamics NASSCO which built the ship, proudly live streamed the event via social media.

Milk was a pederast, not a hero

Harvey Milk and San Francisco Mayor George Moscone were assassinated by Dan White, a former police officer and former city supervisor, on November 27, 1978. Although his homosexuality had nothing to with his murder, the implication that it did has led to Milk becoming a gay martyr, icon, and even a saint.

“Harvey Milk was a degenerate pederast who preyed on teenage boys,” wrote conservative activist, Daily Wire commentator, and blog host Matt Walsh on Twitter in response to the ship’s christening.

“He was the Kevin Spacey of his time. And now he has a Navy ship named after him. We will lose our next war and deserve it,” added Walsh.

Harvey Milk was a degenerate pederast who preyed on teenage boys. He was the Kevin Spacey of his time. And now he has a Navy ship named after him. We will lose our next war and deserve it. https://t.co/D85OQJti7i

“Harvey Milk was literally a pederast with a long record of physically abusing his underage live-in ‘boyfriends,’ explained podcast host Daryl Cooper, a.k.a., “Martyr Made.”

“After one committed suicide in his apartment, he moved another one in two weeks later. Sick, total psychopath, murdered by a man he & Moscone destroyed by slander,” he continued.

Harvey Milk was literally a pederast with a long record of physically abusing his underage live-in “boyfriends.” After one committed suicide in his apartment, he moved another one in two weeks later. Sick, total psychopath, murdered by a man he & Moscone destroyed by slander. https://t.co/Bdx5GKFsEs

Milk’s adopted state, California, also pays tribute each year to him with a “Harvey Milk Day” on May 22 that was signed into law by then-Gov. Arnold Schwarzenegger, a Republican, in 2009.

Jones provided Milk “with a printing press, gave him hundreds of campaign ‘volunteers,’ yielded the Peoples Temple pulpit to him, and provided free publicity to him in the Peoples Forum newspaper,” said Daniel Flynn in a 2018 FrontPage Magazine interview. In exchange, Milk publicly vouched for Jones.