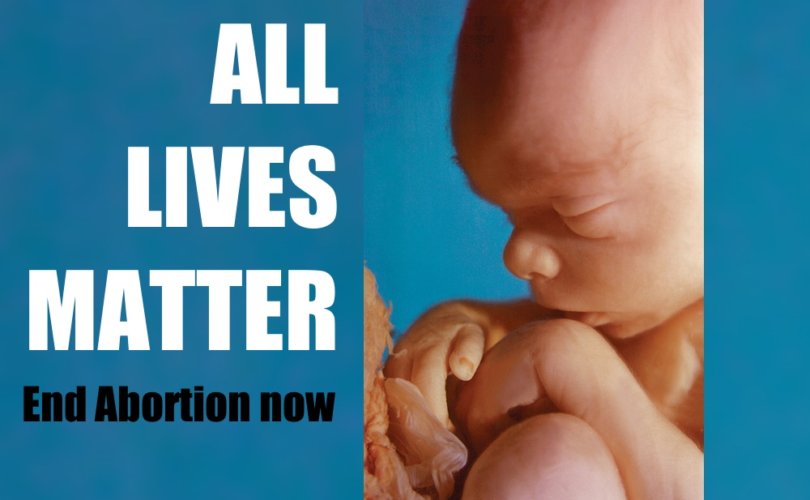 A mock-up of the ad created by LifeSite using the image and wording of the ad provided by Rockford Family Initiative.

ROCKFORD, Illinois, June 24, 2020 (LifeSiteNews) – A pro-life organization has been blocked from running a pro-life “All Lives Matter” ad in a local newspaper. The paper claimed the ad was “racist.”

The Rockford Family Initiative, an Illinois based pro-life organization, attempted to place the pro-life ad in a local newspaper, the Rockford Register Star. The ad depicts a picture of an unborn baby with the words “All Lives Matter” above the picture.

“Every child in the womb is a person created in the image of God, a person loved by God and a little girl or boy who is our sister or brother,” the ad states. “Abortion is the unjust killing of an innocent person. All lives will not matter until every person is loved and respected no matter if they are black or white, born or preborn. We must unite to end the killing of babies by abortion.”

Originally, the newspaper agreed to run the ad. It later refused, however, asking that the wording be changed since it was “racist.” The Register Star sales manager told the Rockford Family Initiative that “all lives matter is seen as racist to the black community.”

“I was informed that we do need to let the client know that all lives matter is seen as racist to the black community and ask if he would consider changing that line,” the sales manager told the pro-life organization in an email obtained by LifeSiteNews.

By stating “All Lives Matter” the Rockford Family Initiative was simply attempting to use a politically savvy slogan that aimed at protecting all preborn babies, both black and white, from being targeted for abortion.

“It is with great disappointment,” Kevin Rilott of the Rockford Family Initiative told LifeSiteNews in response to the ad being banned, “that we learned the simple statement of love and hope ‘All Lives Matter’ is considered too offensive to be printed in our local newspaper.”

“The statement ‘All Lives Matter’ of course covers all people including African Americans, undocumented residents, the poor, the unborn, the sick, police officers, the lonely, people of all races, religions, cultures , and backgrounds – in short it means every person matters, every person is loved by God, and is our sister or brother.”

“The culture of death is in control of our society when our local paper is telling us their readers would be deeply offended if they ran an ad that is aimed at uniting our community behind the idea that ‘All lives Matter,’” Rilott continued.

“Rockford is one of the most dangerous cities in the country and we are just a few miles from Chicago were we see hundreds of people shot and dozens of people murdered every month but it seems the one thing we can't say in print is ‘All Lives Matter.’”

Rilott said that America is now “reaping what we have sown” by allowing abortion.

“By killing millions of unborn children, we have truly become a culture of death where all lives don’t matter,” he said.

“We respectfully ask the Register Star to allow our ads that remind our community that every one of our sisters and brothers in Rockford matters,” he added.

LifeSiteNews reached out to the Register Star for an explanation of why it saw the pro-life ad as “racist.” No response was provided by press time.

Throughout the past weeks, “Black Lives Matter” (BLM) has become a rallying cry across the United States. The official Black Lives Matter organization, however, appears to be committed to neither ending racism nor saving all black lives. Instead, the group has a not-very-hidden agenda to radically change America.

The BLM organization does not view all African American lives as invaluable as it openly supports abortion, which disproportionately targets African Americans. One courageous African American woman recently appealed to Black Lives Matter activists to protest in front of Planned Parenthood, since it was what she called the “Number one killer of the black population.”