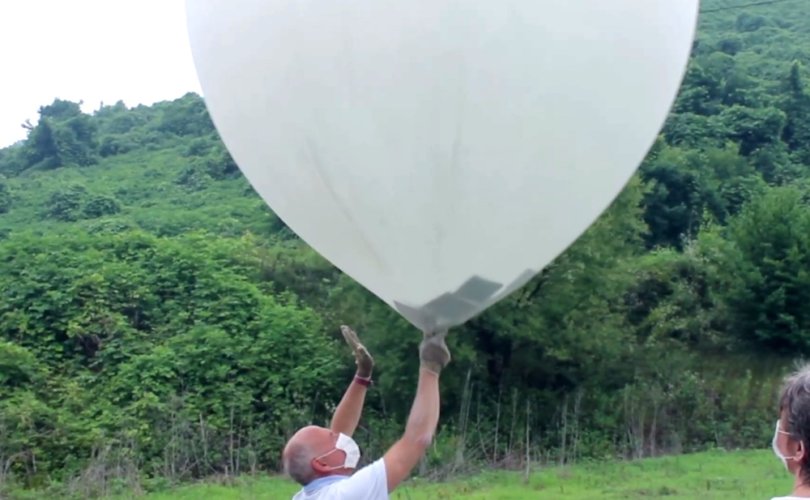 December 9, 2020 (LifeSiteNews) — A U.S. Christian pastor is facing charges from South Korean authorities for launching large helium-filled balloons with Bibles attached to them into the atheist dictatorship of North Korea.

Rev. Dr. Eric Foley of Voice of the Martyrs Korea has been launching the Bible-carrying balloons without incident for more than a decade. Foley and his helpers send approximately 30,000 Bibles into North Korea by balloon every year. The balloons are equipped with advanced GPS technology so the missionaries can confirm that the balloons are landing where they intend. The Bibles are sometimes sent as a booklet, sometimes on an SD or USB card. They are launched from South Korea in the countryside when the winds are favorable near the border between the two countries.

Foley told Mission Network News last month that South Korean authorities are now trying to stop him from sending the balloons because of how it might affect the already tense relationship between the two countries. He explained the three charges that have been brought against him.

“One of them is related to the violation of an inter-Korean exchange law. [This] is a law that regulates commerce between North and South Korea; anything you might be trying to sell from South Korea to North Korea would need to be pre-approved by the government,” he said.

The missionary said the second charge relates to national security and involves laws “designed for natural disaster management,” but that “now they’re being related to balloon launching with a charge that our activity created a national threat to Korea.”

“The third charge that will come out is one related to the use of high-pressure gas,” Foley said.

Foley said in an interview in June that the crackdown has to do with a 2018 agreement between the two countries to reduce military tensions in which it was stated, according to the missionary, that “South Korea would essentially take steps to stop balloon launches from happening.”

That same year, moreover, Kim Yo-jung, the sister of North Korean leader Kim Jong-un, stated that unless the South Korean government clamped down on the “evil propaganda” being sent by way of balloons, officials would abandon the agreement.

“Later on, the South Korean Ministry of Unification indicated that they would seek the passage of a law to prevent the launch of materials,” Foley said.

Foley and his team are asking for prayers.

“Essentially, the police recommending the charges guarantees that I’ll be charged; it’s just a question of when. Could be tomorrow, could be next week, could be next month; we don’t know,” Foley told Mission Network News.

“The prayer that God will bring glory to His name is already being met; people see that there’s something different about Christians. The other prayer is that God would use each of the Bibles that we have for His purpose,” he said.

“God is finding ways to get Bibles into North Korea. We’re amazed at the avenues He’s opening. Please pray that continues. Pray that God is glorified,” he added.