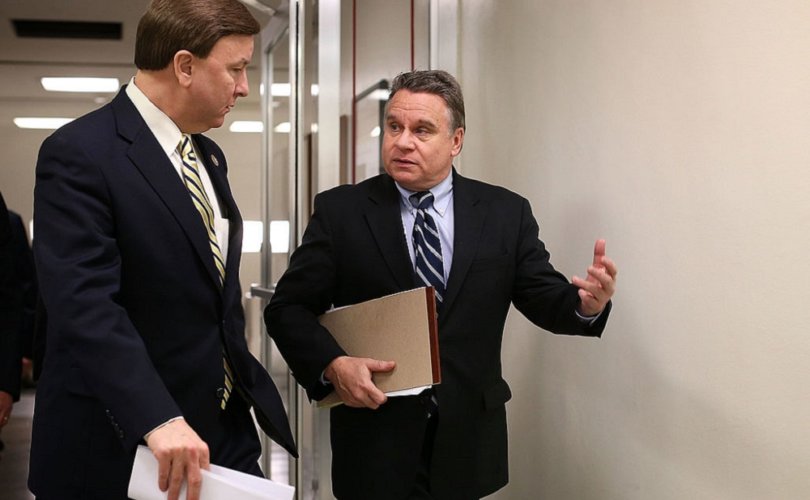 “Abortion on demand is not the will of the people in Northern Ireland, and if it were, Northern Ireland has a duly constituted Assembly by which it can balance equities and legislate on the matter,” Smith wrote in a letter co-signed by fellow members of Congress Andy Harris, Ann Wagner and Vicky Hartzler.

Since 1967 and the passing of the U.K. Abortion Act, Northern Ireland has been the only part of the United Kingdom where abortion has remained presumptively unlawful. In addition to electing M.P.s to the U.K.’s parliament in Westminster, Northern Ireland also has its own devolved government in Stormont, Belfast. It has been that devolved government that, since 1967, has continually rejected attempts to introduce abortion laws into the region.

But the Northern Ireland government has now resumed, and the U.S. politicians called for the issue to be referred back to the local government after Smith met Northern Irish political leaders from the Democratic Unionist Party (DUP), including Ian Paisley, Jr., son of the DUP's founder, Ian Paisley.

The letter claims that the legislation “fails the most fundamental test of any act of government,” as it “neither reflects nor respects the will of the people, who have a right to expect that their Government act in their interest, and carry out their will.”

The politicians noted that the legislation will mean that Northern Ireland has “a far more liberal abortion regime than currently exists in the other constituent parts of the United Kingdom” and said it “runs counter to the fundamental democratic principles of self-governance and self-determination.”

Paul Givan, one of the Northern Irish politicians who met with Smith, tweeted earlier today that he welcomed this “significant intervention” from the United States congressional leaders. Givan said, “Westminster’s actions are wrong on the issue of abortion” and that the abortion legislation “is an attack on Northern Ireland’s democratic institutions.”

I welcome this significant intervention from United States Congressional Leaders. Westminster’s actions are wrong on the issue of abortion and is an attack on Northern Ireland’s democratic institutions. pic.twitter.com/fm7mYAXvGT

Liam Gibson, political officer in Northern Ireland for the Society for the Protection of Unborn Children (SPUC), told LifeSiteNews that it was “excellent that Chris Smith and his colleagues have pointed out the lack of legitimacy in what has happened to the people of Northern Ireland and the appalling abuse of power that the Wetminster political establishment has shown, not only to unborn children, but to the rule of law.”

Gibson told LifeSite that the move to force through decriminalization of abortion in Northern Ireland was a direct response to the situation in the United States as it is developing.

“The pro-abortion lobby in the UK expects Roe vs Wade to be overturned very soon and for that to have huge international consequences. That’s why they have moved to consolidate the abortion law within the United Kingdom,” Gibson said.

“Nevertheless, the best way for people in the United States to help the pro-life cause in Northern Ireland and around the world is by fighting abortion at every level and exposing it for the tragic injustice it is in every instance.”