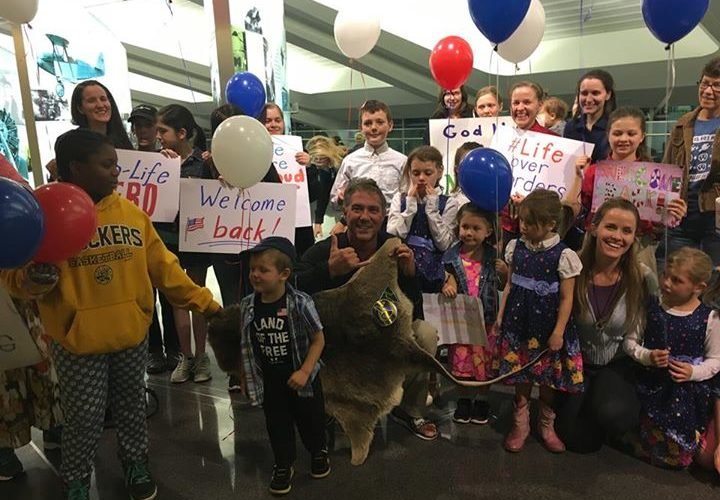 WICHITA, Kansas, October 7, 2015 (LifeSiteNews) — Pro-life activist Troy Newman received a hero’s welcome when he arrived with his wife Melissa in Wichita, Kansas, Saturday evening after being detained and refused entry into Australia. Over 30 friends, supporters, and family members showed up at the local airport with red, white, and blue balloons and “welcome back” posters.

“I want to thank you for all your prayers and support through the past three days,” Newman, who is the President of Operation Rescue, stated in a video he posted to Facebook October 3 after touching down in the U.S.

“It’s been quite an ordeal, but I can assure you that even a little detention will not deter us from speaking the truth about abortion…They may even throw us in jail for a little while, but we will not be deterred, we will not be silent, we will never give up. I pray that you don’t either,” he said.

Quick video as I return from Australia. Thank you for all your support!!

Last week Newman was already en route to Australia for a pro-life speaking tour when he learned at a stopover in Denver, Colorado, that his entrance visa had been revoked. Abortion activists in Australia had waged an effective smear campaign against the pro-lifer that resulted in Immigration Minister Peter Dutton making a ‘captain call’ to have the visa canceled.

Newman eventually reached Los Angeles, however, where he managed to get on the plane for Melbourne with his already-printed boarding pass. Airline staff with United Airlines did not check his visa papers at that time and now face a fine for allowing a passenger to board without a valid visa.

Newman arrived in Melbourne October 1 hoping the Australian government would see that his reputation had been unjustly attacked and that it would admit to making a mistake in revoking his visa. But his bid proved unsuccessful. Upon reaching Melbourne, Newman was detained in an airport security facility where he was not allowed to communicate with his attorney or his wife. He was later moved to a military base where he was incarcerated in solitary confinement.

An attorney for Newman eventually reached a plea bargain with the department of immigration, only to have the Immigration Minister refuse to sign the deal. An appeal of the decision to revoke the visa was then made to the High Court, but to no avail. The judge did, however, agree to revisit the question early November as to whether or not the immigration department’s decision to cancel the visa was valid in view of considerations involving freedom of political communication.

Newman, who was given the choice to remain in jail until his hearing or voluntarily leave the country, decided to return home.

On the morning of his departure, Australian authorities escorted Newman onto a United Airlines flight bound for Los Angeles. Upon arrival, he was escorted off the plane where he was met by U.S. courtesy officials who sped him through customs and to freedom.

Australian commentators from The Bolt slammed the country’s Liberal government for a “major failing” in effectively kicking Newman out of the country.

“I can’t personally see why this fellow should have been denied a visa,” said Michael Kroger, Victoria Liberal Party President, after outlining Newman’s anti-abortion views, including that abortionists should be tried as murders. “He has a right to say that,” he added.

Newman said in a press release Monday that the Australian government’s actions against him sets a “dangerous precedent that does not bode well for the Australian people or anyone traveling there with a pro-life message.”

“Freedom of speech in Australia is under attack, make no mistake,” he said.

Right To Life Australia is now gearing up to challenge the Minister’s cancellation of the visa, knowing that a precedent must be avoided that allows for the cancellation of visas of international pro-life activists.

“I look forward to having my case heard in full and to being given an opportunity to clear my name and that of Operation Rescue from the completely false accusation that we support violence in any way,” Newman said.