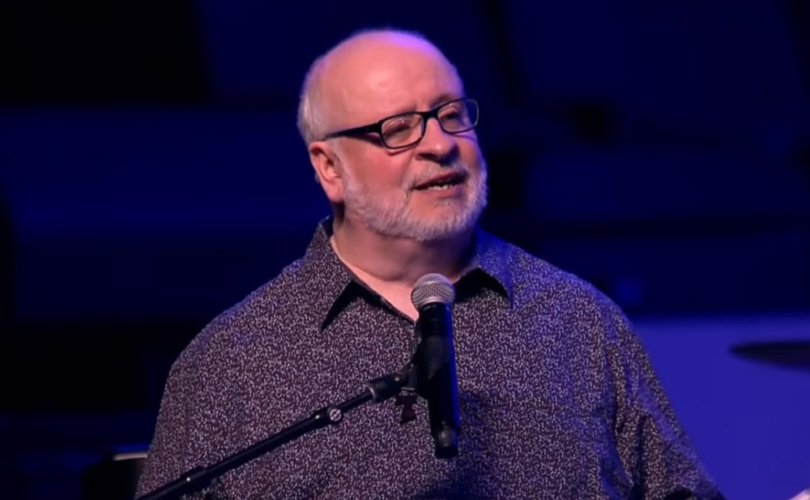 June 16, 2020 update: This report now includes a statement from Haas.

UNITED STATES, June 15, 2020 (LifeSiteNews) — A famous American Catholic hymnist whose songs are well known in churches throughout the country has lost his sponsorship from a major Catholic hymnal publisher following multiple accusations of sexual misconduct.

David Haas, 63, is known by Catholics throughout the English-speaking world for such hymns as “Blessed are They,” “You Are Mine,” and “Servant Song.” Last year, the hymnist composed a chant to celebrate homosexuality.

GIA Publications said in a Facebook post published over the past weekend that it became aware of allegations of sexual misconduct by Haas earlier this year and that it subsequently learned that the Archdiocese of Saint Paul and Minneapolis was considering a decision not to provide him a letter of suitability.

“In response, we suspended our sponsorship and publishing relationship with Mr. Haas, and have not sponsored his work since late January,” the publishing company said.

“New allegations of sexually abusive conduct by Mr. Haas continue to be reported. We take these reports seriously. GIA Publications supports and stands with victims. We must join together to address and prevent sexual abuse. If you would like to share any information or make a report, please contact www.intoaccount.org.”

Haas says he “denies” the allegations, denouncing them as “false, reckless and offensive.”

He told LifeSiteNews in a statement (see full statement below) that he was “sad and disappointed that Into Account Inc. chose to use social media- a public forum- to deprive him of a fair and legitimate venue to face his accusers, but instead launched a marketing effort with the mission to destroy his reputation and livelihood.”

In response to the GIA Publications Facebook post, which has attracted almost 300 comments, several users of the social media platform have called for Haas’s works to be removed from existing publications out of respect for Haas’s alleged victims.

“His works must be removed from all publications and any current publications should be recalled,” one user wrote. “One can only imagine the emotional distress caused by hearing the works of one’s assaulter magnified during a liturgy. For the victims we must remove these triggers.”

The announcement by GIA Publications follows the release of an email written last month to Haas’s associates by the abuse survivor advocacy group Into Account.

“We specialize in providing support to survivors in cases that involve churches, faith-based organizations, and perpetrators who abuse spiritual authority,” IntoAccount’s executive director, Stephanie Krehbiel, explained in a May 29 letter addressed to Associates of Haas.

“In that capacity, we’ve received reports from multiple individuals reporting sexually predatory actions from the composer David Haas. These individuals have asked IntoAccount to communicate our assessment of the information they’ve shared with us,” Krehbiel continues.

Krehbiel claims that reports they have received suggest that Haas’s behavior shows a “repeated, unethical abuse of the professional and spiritual power he has had in church music circles.”

“Haas has allegedly targeted multiple women using techniques that abuse prevention experts identify as grooming, to create conditions in which women felt obligated to perform sexual favors in exchange for professional opportunities. His generosity, we are told, often came with a sexual price tag.”

The letter makes clear that IntoAccount has no knowledge of Haas perpetrating any sexual offenses against minors” or knowledge of any behavior from Haas that has led to criminal charges.

“What we do have,” Krehbiel writes, “is a series of disturbing allegations spanning thirty years, from multiple, credible individuals who know Haas well.”

“Haas reportedly focuses attention on women with past histories of abuse, then uses the vulnerabilities created by trauma to create intimacy. Multiple women have reported to us that Haas is skilled at making his targets feel spiritually affirmed, seen, and loved, with a keen understanding of how that spiritual intimacy can then be exploited sexually.”

Krehbiel said that Haas came to their attention through an institutional report form.

“Some women have described romantic relationships with Haas that felt consensual in the beginning, but were then marked by sudden, overwhelming sexual aggression from Haas, in which any resistance was met with extreme anger. Other women have described incidents that we would interpret as outright sexual battery, involving groping, forcible kissing, and aggressive, lewd propositions. The youngest victim reported to us was nineteen years old at the time of the alleged sexual battery, while Haas was over fifty.”

The Catholic News Agency (CNA) reports that a spokesperson for the Archdiocese of St. Paul and Minneapolis, Haas’s local diocese, told CNA that the archdiocese had also received reports of sexual misconduct by Haas.

“In November of 2018, the Archdiocese of Saint Paul and Minneapolis received two reports that Mr. Haas acted inappropriately with two adult women at a recent event in another state. Both women complained that Mr. Haas’ conduct that evening made them feel uncomfortable. Mr. Haas denied misconduct. In 1987, the Archdiocese had received a complaint alleging that David Haas had made an unwelcomed sexual advance toward a young adult woman, which he also denied,” archdiocesan spokesman Tom Halden told CNA.

“Following the 2018 complaints, the Archdiocese informed Mr. Haas that the Archdiocese would not provide him with a letter of recommendation that he had requested,” Halden continued.

“Furthermore, the Archdiocese advised Mr. Haas that he was not allowed to provide services at Catholic institutions in the Archdiocese without disclosure of the complaints made against him.”

In 2018, Jesuit-run America Magazine described Haas as “one of the most prolific and significant liturgical composers of the post-Vatican II English-speaking church.” Last year, Haas composed a refrain to celebrate “Pride Month” and had been scheduled to provide the music later this month for Outreach 2020, an “LGBT Catholic Ministry Gathering,” which has been promoted by pro-homosexual activist Fr. James Martin. The event has now been delayed due to the coronavirus crisis.

David Haas Denies Into Account Inc.’s Allegations.
David Haas, a Catholic composer, recording artist, author, and presenter denies recent allegations by Into Account Inc. – a Lawrence, Kansas non-profit whose website mission statement purports to work with abuse survivors.
Into Account Inc. claims to have received information from anonymous individuals regarding various allegations against David Haas that it characterized as sexual or spiritual abuse.
Into Account Inc.’s website includes a disclaimer that states in part, “We cannot guarantee the accuracy or completeness of survivor stories shared.” https://intoaccount.org/
Despite its own disclaimer, Into Account Inc. gained access to David Haas’ personal, professional, and business contacts to electronically publish its allegations and conclusory opinions throughout the United States and beyond. Into Account’s communication also included an “Institutional Report Form” to market and solicit for potential clients.
David Haas denounces Into Account Inc.’s allegations as false, reckless and offensive. He is also sad and disappointed that Into Account Inc. chose to use social media- a public forum- to deprive him of a fair and legitimate venue to face his accusers, but instead launched a marketing effort with the mission to destroy his reputation and livelihood.
As an advocate for survivors of clergy sexual abuse and discrimination of all kinds, David Haas stands in solidarity and prayerful support of sexual abuse victims and encourages survivors to seek legitimate and appropriate professional services and/or to report any allegations to law enforcement.