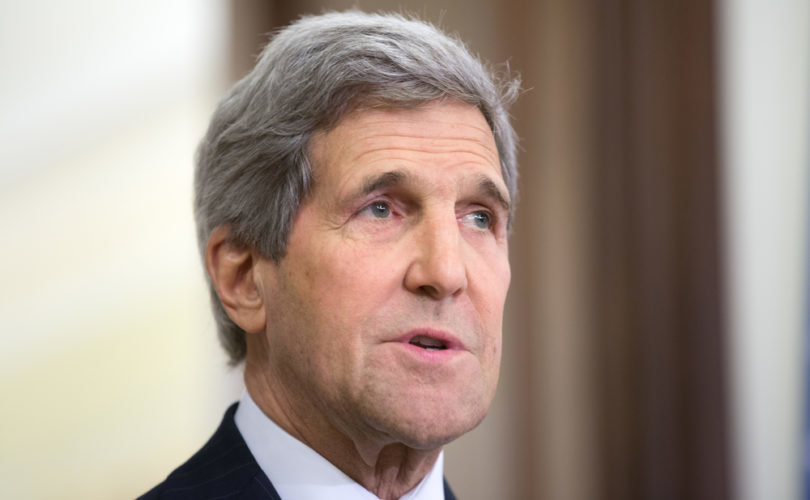 March 17, 2016 (LifeSiteNews) – Secretary of State John Kerry said Thursday that the United States recognizes the atrocities perpetrated by ISIS/Daesh against Yazidis, Christians, and Shia Muslims as genocide. ADF International, which authored an extensive analysis of the issue as part of a report the Knights of Columbus provided to Kerry, says it welcomes this statement as an important first step in stopping the atrocities against Christians and other religious minorities in Syria and Iraq and bringing the perpetrators to justice.

“Secretary of State Kerry has recognized an appropriate name for the actions of ISIS against Christians and other religious minorities: genocide. This recognition is an important first step in the necessary process by the United States, the UN, and the international community to stop the killing in the Middle East,” said Douglas Napier, senior counsel and executive director of ADF International, which has been greatly involved in providing evidence and legal analysis to the State Department and U.S. Congress as well as international bodies, including the European Parliament, Council of Europe, and United Nations.

“As a permanent member of the UN Security Council, the United States has an influential role to play in supporting a referral to the International Criminal Court to condemn and prosecute the perpetrators,” Napier explained. “Once it is recognized that genocide is happening, the 147 countries who are party to the UN Genocide Convention, including the U.S., have an obligation to do all they can to bring the killing of innocent people to an end.”

International law sets out strict criteria for when it is accurate to use the term “genocide.” According to the UN Genocide Convention of 1948, it refers to acts committed with the specific intent to “destroy, in whole or in part, a national, ethnic, racial or religious group.”

ISIS deliberately targets religious and ethnic minority groups in the Middle East for destruction. The number of Christians has dropped from 2 million to less than 1 million in Syria, and from 1.4 million to less than 260,000 in Iraq in just a few years. The Yazidis in the region of Kurdistan have been almost entirely wiped out. The atrocities include assassinations of church leaders, torture, mass murders, kidnapping, sexual enslavement and systematic rape of Christian and Yazidi girls and women, and the destruction of churches, monasteries, and cemeteries.

Find more on the ongoing genocide in the Middle East and how to end it at https://www.adfinternational.org/stop-genocide.