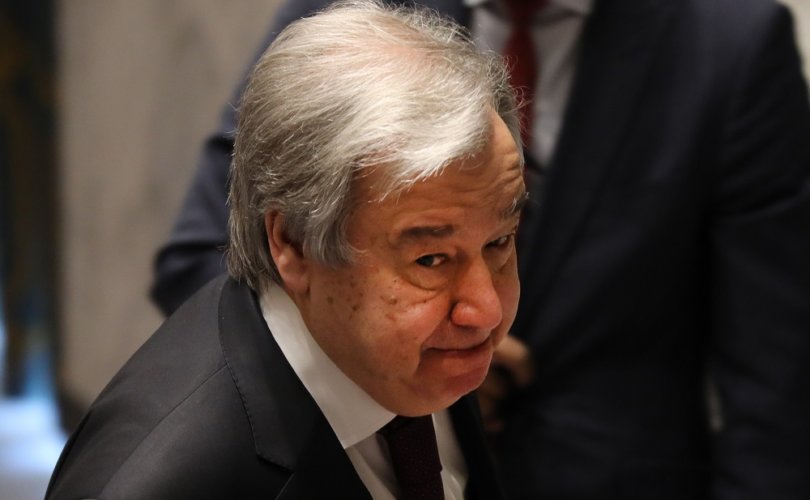 August 27, 2020 (LifeSiteNews) — The U.S. Mission to International Organizations in Geneva has reacted scathingly to a recent letter by which several U.N. bodies accused the United States of having put in place undue “restrictions taken in the context of the COVID-19 pandemic impeding access to abortion services.”

The U.N. letter alluded to in the official American response dates back to May 22, 2020. Five days later, on May 27, in a statement, the U.N. Working Group on Discrimination against Women and Girls publicly accused the United States of “manipulating the crisis to severely restrict women’s reproductive rights.”

Speaking on behalf of the Working Group, Elizabeth Broderick, vice chair, added: “This situation is also the latest example illustrating a pattern of restrictions and retrogressions in access to legal abortion care across the country. … Abortion care constitutes essential health care and must remain available during the COVID-19 crisis. Restrictions on access to comprehensive reproductive health information and services, including abortion as well as contraception, constitute human rights violations and can cause irreversible harm, in particular to low-income women and those belonging to racial minorities and immigrant communities,” she added.

She insisted: “We reiterate that sexual and reproductive health services, including access to safe and legal abortion, are essential and must remain a key component of the UN’s priorities in its responses to the COVID-19 pandemic.”

The response by the Swiss-based special mission charged with relations with the U.N. was anything but diplomatic in tone. The U.S. Mission’s website made its August 11 response to the U.N. authorities public on August 25, unapologetically slamming their attempt to present access to abortion as a “human right.”

Calling the U.N. letter “bizarre and inexplicable,” the U.S. Mission as such underscored the manipulation that is truly taking place in Geneva: “As United Nations human rights mandate holders, you are undoubtedly aware that international human rights law does not recognize any ‘right to abortion.’ The United States is disappointed by and categorically rejects this transparent attempt to take advantage of the COVID-19 pandemic to assert the existence of such a right. This is a perversion of the human rights system and the founding principles of the United Nations.”

The U.S. Mission took care to quote a recent letter by U.N. secretary general António Guterres to USAID on June 1, 2020, acknowledging that monitoring access to legal abortion is not part of the competency of the United Nations:

“In providing [critical support under the Global Humanitarian Response Plan], and in accordance with its Charter, the United Nations does not intervene in matters which are essentially within the domestic jurisdiction of any State. Thus, health care is provided with full respect to national laws. It does not promote, much less impose, abortion on anyone, nor is it intended to do so,” wrote Guterres.

While this is not the whole picture — several U.N. agencies do in fact explicitly campaign for legal access to abortion across the planet — Guterres was clearly making the point that hard law — i.e., the written texts that govern international relations, in particular in the sphere of the United Nations — does not assert that abortion is a “right.”

Many U.N. texts instead uphold “reproductive rights,” often the words used as a fig leaf for explicit pro-abortion language, but the point remains that international treaties and agreements do not include an obligation to make the killing of unborn children legal under any circumstance.

The U.S. Mission chose to make its point on the issue in direct language, pinpointing real and serious human rights violations in other parts of the world that the Working Group on Discrimination against Women and Girls and Special Rapporteurs have preferred to overlook:

We are particularly disappointed that you have chosen to waste the limited time and resources of your mandates on such spurious allegations, rather than focusing your energies on areas where your attention is most appropriate and warranted. For instance, the Chinese Communist Party is currently directing the use of forced abortion, forced sterilization and forced birth control in Xinjiang. These are actual human rights abuses, implicating millions of women and girls and their health, on an industrial scale, targeting a vulnerable ethnic and religious minority. Yet the United Nations system — including the Secretary-General, the Human Rights Council, and the Office of the High Commissioner for Human Rights — has been notably quiet on this topic, even as they find ample opportunity to opine on matters of American domestic political concern.

Reiterating its savage critique of the U.N. bodies, the U.S. Mission concluded:

One of the reasons that the United States and others increasingly see the UN’s human rights system as utterly broken is the tendency of its self-appointed guardians to label certain policy preferences as ‘rights’ — a practice that devalues the entire human rights enterprise and leads to absurd outcomes such as the above-referenced letter. At the same time, we see violations of human rights and fundamental freedoms on a massive scale that generate little or no comment by these same guardians.

If you truly are concerned about the integrity of the United Nations human rights system, we urge you to reconsider the approach that has led you and your colleagues to this sad point, so far from the noble purpose for which this institution was founded 75 years ago.

This is not the first time that U.S. officials have spoken out clearly under the Trump administration against pressure for what it calls “legal and safe” abortion on the part of the U.N. Last September, U.S. secretary for Health and Human Services, Alex Azar, joined eighteen other countries in delivering a joint statement at the United Nations General Assembly in asserting that “there is no international right to abortion.”

The document underscored the fraudulent use of “reproductive rights” language in order to promote abortion worldwide: “We do not support references to ambiguous terms and expressions, such as sexual and reproductive health and rights in U.N. documents, because they can undermine the critical role of the family and promote practices, like abortion, in circumstances that do not enjoy international consensus and which can be misinterpreted by U.N. agencies.”

Earlier this summer, Donald Trump’s top diplomat, Mike Pompeo, declared at a conservative pro-family convention that there is no “human right” to abortion. He told The Family Leader Summit in Iowa: “Abortion quite simply isn’t a human right. It takes a human life.” He had already stated, regarding human rights as understood in the American Declaration of Independence and Constitution: “Our nation’s foreign policy must be grounded in those central understandings.”

This commitment has been clearly enacted by the U.S. Mission to Geneva in what appears to be the deliberate revival of a longstanding war of words at the U.N.

While — as the U.S. Mission recalled — no international instruments call for legalizing abortion in any country under any pretext, it is a fact that U.N. Women, the U.N. Population Fund, and the U.N. Human Rights Commission (that was ultimately responsible for the May 22 letter of official complaints about U.S. policy regarding abortion during the COVID-19 lockdown) have long done all they could to bring abortion “rights” into the U.N. by the back door, with former U.N. secretary general Ban Ki-moon’s blessing.

To give but a few examples, the official news site of the U.N. published a news item on September 28, 2018 under the title “Access to legal abortion services needed, to prevent 47,000 women dying each year — UN rights experts.”

In 2016, for the first time, the United Nations Human Rights Committee ordered Peru to give compensation to a woman who had been prevented by medical authorities from aborting her anencephalic child in 2001 — she was 17 at the time — although Peruvian law provides for legal abortion in such cases. The girl’s baby lived for four days. The legal process in Geneva took 15 years to complete, but Peru ended up paying financial compensation for its allegedly “cruel, inhuman and degrading treatment.”

“This marked the first time a United Nations Committee had held a country accountable for failing to ensure access to safe, legal abortion,” the Huffington Post approvingly remarked.

This is not required by international law, but U.N. agencies are certainly doing their best to make member countries believe that it is the case. The U.N. Mission’s head-on response will also help those countries that have not bought the “abortion rights” propaganda to resist pressure coming from the United Nations in that direction.