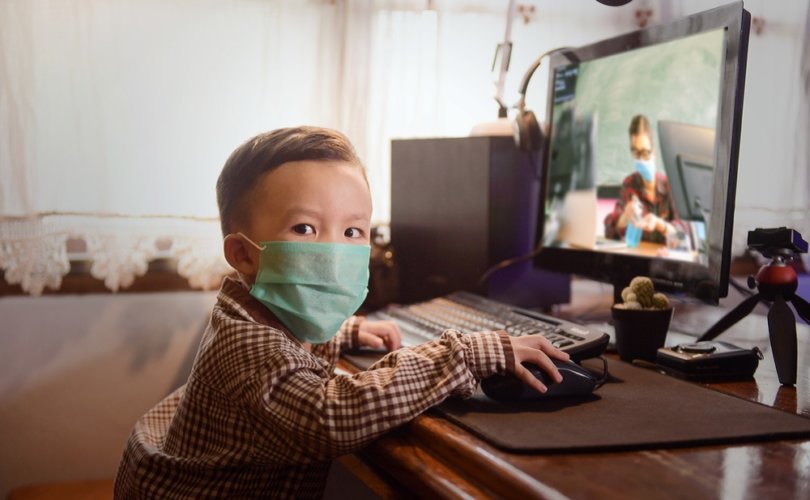 The Rutherford County School (RCS) letter asking parents to steer clear of their children’s virtual classroom for privacy reasons was reported August 15 by the Tennessee Star, which received a copy of the form.

“RCS strives to present these opportunities in a secure format that protects student privacy to the greatest extent possible, however because these meetings will occur virtually RCS is limited in its ability to fully control certain factors such as non-student observers that may be present in the home of a student participating in the virtual meeting,” the form stated.

“RCS strongly discourages non-student observation of online meetings due to the potential of confidential information about a student being revealed.”

Parents are asked to sign the form, which warns that “violation of this agreement may result in RCS removing my child from the virtual meeting,” the Tennessee Star reported.

In the wake of controversy, RCS spokesman James Evans told the Star in an email that the school district had sent its schools new directives.

“We are aware of the concern that has been raised about this distance-learning letter that was sent to parents,” Evans said.

“The intent was not to prevent parents from being involved with their children during distance learning, but it was intended to protect the academic privacy of other students in the classroom who are visible during certain virtual class sessions,” he added.

“We have issued new guidance to principals that parents can assist their children during virtual group lessons with permission of the instructor but should refrain from sharing or recording any information about other students in the classroom.”

While the majority of RCS’s 48,000 students chose to return to their schools, about 20,000, or 41 percent, opted for distance learning, Evans told LifeSiteNews.

The RCS incident comes as the Tennessee Bureau of Investigation (TBI) is warning parents to be exceptionally vigilant about what their children are doing online after tracking an increase in cyber-activity by sexual predators since March, as Fox13 reported.

The agency has received 450 tips about cyber-crimes already this year as individuals seeking to sexually prey on children adapt, along with families, to an increased online existence because of the coronavirus crisis, said TBI director David Rausch.

“These are not just big-city issues, we are seeing efforts to exploit children in both the urban and rural areas all across our state,” he said.

The Tennessee Board of Education is working with the TBI to increase cyber-security for virtual learning, and the bureau has assigned more agents to this division, Rausch said.

But parents must be constantly on guard, he emphasized.

“It can only take a few steps to get from a virtual school to an escort ad.”

Children should use computers in a common area of the home, not in their bedrooms or the bathroom, and parents should make use of all available parental control features, he advised.

Parents should read all their children’s online chat room conversations to be sure they know the recipient and what is being sent, Rausch said.

“Our agents have seen children as young as five years old taking photos of themselves and at the direction of someone they communicated with online,” he added.

Concerns over the RCS form also come a a Philadelphia teacher complained in a private chat last week that the increased parental oversight that comes with virtual classrooms will “damage” sex education.

“I am most intrigued by the damage that ‘helicopter/snowplow’ parents can do in honest conversations about gender/sexuality,” wrote Kay, whose comments were captured in a screenshot by another Twitter user and posted publicly.

While “‘conservative’ parents are my chief concern,” Kay tweeted, “the damage can come from the left too. If we are engaged in the messy work of destabilizing a kids [sic] racism or homophobia or transphobia — how much do we want their classmates’ parents piling on?”

According to the Family Research Council (FRC) report, “Sex Education in Public Schools,” released in May, “sex ed programs push the limits on what is appropriate, both in terms of the material presented to students and the age at which it is presented.”

Author Cathy Ruse detailed how parents are often unaware that these things are happening at school and, in some cases, are intentionally deceived about what is being taught.