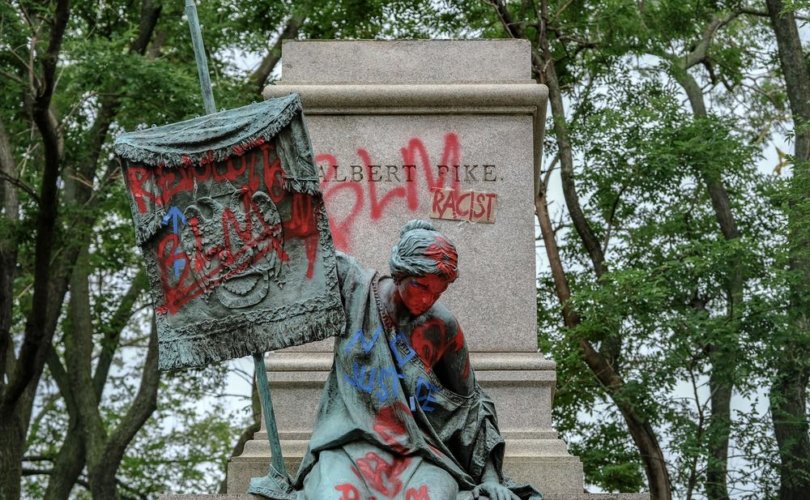 A vandalized statue of a Confederate general in Washington, D.C.Alex Wroblewski / Getty Images

UNITED STATES, June 22, 2020 (LifeSiteNews) — A popular U.S. science and “do-it-yourself” instruction magazine has published an article advising readers how to pull down statues, as riots around the country continue the destruction of public and private buildings.

Popular Mechanics, first founded in Chicago in 1902, last week celebrated the toppling of “racist” statues in an article entitled “How to Topple a Statue Using Science.”

“Should you happen to find yourself near a statue that you decide you no longer like, we asked scientists for the best, safest ways to bring it to the ground without anyone getting hurt—except, of course, for the inanimate racist who’s been dead for a century anyway,” wrote the article’s author James Stout.

Stout goes on to explain that “[t]he force required to pull down a statue isn’t as great as you think.”

“To break the statue from its base, split into two teams on either side and work in a back-and-forth motion. Most statues are attached to the base by 2 to 3 feet of rebar, so you’ll actually be breaking it at the bronze above the rebar—not the rebar itself,” the article continues.

Stout also outlines what he calls “The Chemical Approach” to taking down offending statues.

“Maybe you’re operating with an even smaller team—or toppling the statue all by yourself. In that case, your best bet is melting the damn thing. So let’s make a thermite reaction,” he says.

Quoting Chris Harrison, a chemistry professor at San Diego State University, the article explains: “The formula is very simple. It’s 3:1 by mass of rust and aluminum powder. You mix those together and use a piece of magnesium to use as a high temperature fuse. And if you don’t have one, you could use a sparkler.”

Harrison goes on to give further instructions for melting the feet of statues. After explaining the likelihood of a chemical reaction causing a high-pitched squeal, he says, “One could imagine it sounding something like the sound a confederate general would make if their feet were on fire.”

The article, which has attracted a backlash from critics on social media, includes an image of a decapitated Christopher Columbus statue in Boston, a picture of protestors in England throwing a statue of Edward Colston into a river earlier this month, as well as a photo of U.S. troops toppling a statue of Saddam Hussein in Iraq in 2003.

Social commentator Christina Sommers accused the magazine of going “full Taliban” by publishing a guide on how to destroy statues. “I always thought @PopMech was about building things,” she wrote on Twitter.

������Popular Mechanics goes full Taliban. Several engineers chime in on how to destroy statues. I always thought @PopMech was about building things. https://t.co/hiXFORXRDW

Numerous statues around the United States have either been pulled down by protestors or officially removed in recent weeks following the death of George Floyd. In Virginia a legal battle is continuing after governor Ralph Northam ordered the removal of a historic statue of Confederate general Robert E. Lee, but a court subsequently placed an injunction on the order. In California this past weekend protestors tore down and desecrated two statues of St. Junipero Serra, while another has been officially approved for removal. Yesterday New York City mayor Bill de Blasio announced that a statue of former U.S. president Theodore Roosevelt will be removed from the front of the American Natural History Museum in New York City.

133 petitioners are also calling for St. Louis, Missouri, which is named after the Catholic St. Louis IX, to be renamed. They also want a statue of the monarch, who was canonized by Pope Boniface VIII in 1297, torn down because of the saint’s supposedly “Islamophobic” and anti-Semitic views. Earlier this month, leftists vandalized a statue of Gandhi in front of the Indian embassy in Washington, D.C.