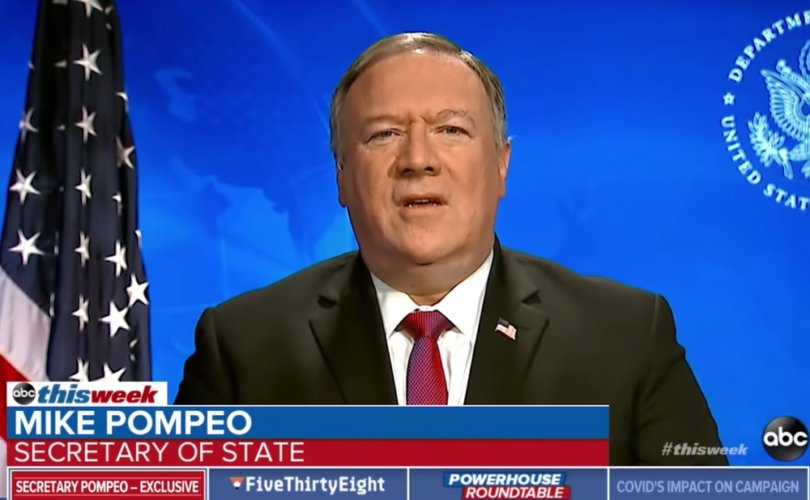 WASHINGTON, DC, May 5, 2020 (LifeSiteNews) – According to U.S. Secretary of State Mike Pompeo, there is “enormous evidence” that COVID-19 first came from a laboratory in Wuhan, China.

“I can tell you that there is a significant amount of evidence that this came from that laboratory in Wuhan,” Pompeo told ABC’s “This Week” last Sunday.

Pompeo did not comment on whether the virus was intentionally released by the Chinese institution, or whether it was an accident. “I can’t answer your question about that, because the Chinese Communist Party has refused to cooperate with world health experts.”

When asked if he believes that the virus is man-made or genetically modified, Pompeo replied:

“Look, the best experts so far seem to think it was man-made. I have no reason to disbelieve that, at this point.”

When interviewer Martha Raddatz pointed out, however, that the office of the Director of National Intelligence has stated that the scientific consensus is the virus is not man-made or genetically modified, Pompeo backtracked on his previous statement.

“That's right. I agree with that. Yeah, I've seen their analysis. I've seen the summary that you saw that was released publicly. I have no reason to doubt that that is accurate,” he said.

Raddatz then asked Pompeo: “Okay, so just to be clear, you do not think it was man-made or genetically modified?”

“I've seen what the Intelligence Committee has said. I have no reason to believe that they've got it wrong,” he replied.

Throughout the interview, Pompeo went after the Chinese Communist Party for the way it handled information about the coronavirus outbreak.

“We can confirm that the Chinese Communist Party did all that it could to make sure that the world didn’t learn in a timely fashion about what was taking place,” the Secretary of State emphasized.

“China has a history of infecting the world, and they have a history of running substandard laboratories,” he said. “These are not the first times that we’ve had a world exposed to viruses as a result of failures in a Chinese lab. And so, while the intelligence community continues to do its work, they should continue to do that, and verify, so that we are certain.”

An intelligence report prepared by the Department of Homeland Security (DHS), as obtained by the Associated Press (AP), claims that China “intentionally concealed the severity” of the coronavirus in early January.

“Not classified but marked ‘for official use only,’ the DHS analysis states that, while downplaying the severity of the coronavirus, China increased imports and decreased exports of medical supplies,” the AP reported. “It attempted to cover up doing so by ‘denying there were export restrictions and obfuscating and delaying provision of its trade data,’ the analysis states.”

On Sunday, Mike Pompeo said that “the Chinese Communist Party had the opportunity to prevent all of the calamity that has befallen the world.”

The current situation, he continued, “is an enormous crisis created by the fact that the Chinese Communist Party reverted to form, reverted to the kinds of disinformation, the kinds of concealment, that authoritarian regimes do.”

“Had those scientists been operating in America, they would’ve put this out, there would’ve been an exchange of ideas, and we would have quickly identified the kinds of things that needed to be done in response,” Pompeo was convinced.

“Instead, China behaved like authoritarian regimes do, attempted to conceal and hide and confuse. It employed the World Health Organization as a tool to do the same.”

In mid-April, President Donald Trump had announced that he would “halt” all funding to the World Health Organization (WHO), which is an institution that is part of the United Nations.

“We have deep concerns about whether America’s generosity has been put to the best use possible,” Trump said. “The reality is that the WHO failed to adequately obtain, vet, and share information in a timely and transparent fashion.”

The DHS intelligence report claimed that “China held off informing the World Health Organization that the coronavirus ‘was a contagion’ for much of January so it could order medical supplies from abroad – and that its imports of face masks and surgical gowns and gloves increased sharply.”

According to Pompeo, the world community is coming together in its assessment of how China handled the coronavirus outbreak. “The Australians agree with that. You hear the Europeans beginning to say the same thing. I think the whole world is united, understanding that China brought this virus to the world,” he said.

During a recent episode of The Van Maren Show, China expert Steven Mosher explained that “[i]t’s always politics in China.” Mosher said that during China’s handling of what has now become an international crisis, the government’s first priority was its political success. Instead of providing the world with transparency and honest figures, he added, China and the WHO were slow in issuing warnings and disclosing the virus’ spread.

Mosher has estimated that the death toll was 20 times higher than reported by the Chinese, based on the crematory chimney activity, as well as the number of funeral urns used during that time.