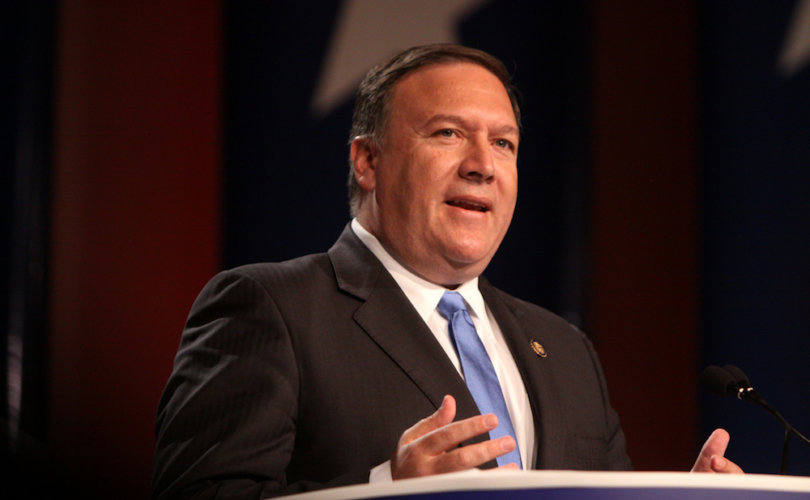 WASHINGTON, DC, September 22, 2020 (LifeSiteNews) ― The United States Secretary of State has published an essay begging the Vatican to speak out against human rights abuses in China.

Michael R. “Mike” Pompeo, the US Secretary of State since late April 2018, submitted the essay, titled “China’s Catholics and the Church’s Moral Witness” to First Things. It appeared online on September 18.

The principal thrust of the essay is that the Vatican, which has boldly spoken out against repressive political regimes before, must do so again on behalf of people abused by communist China. “Now more than ever, the Chinese people need the Vatican’s moral witness and authority in support of China’s religious believers,” Pompeo wrote.

“The Holy See has a unique capacity and duty to focus the world’s attention on human rights violations, especially those perpetrated by totalitarian regimes like Beijing’s. In the late twentieth century, the Church’s power of moral witness helped inspire those who liberated central and eastern Europe from communism, and those who challenged autocratic and authoritarian regimes in Latin America and East Asia,” he continued.

“That same power of moral witness should be deployed today with respect to the Chinese Communist Party.”

This month Vatican diplomats will be sitting down with Chinese officials to discuss their 2018 concordat. Pompeo explained to readers that the Vatican had hoped to improve conditions for Chinese Catholics by coming to an agreement with China about the appointment of bishops.

Unfortunately, that did not happen.

“Two years on, it’s clear that the Sino-Vatican agreement has not shielded Catholics from the Party’s depredations, to say nothing of the Party’s horrific treatment of Christians, Tibetan Buddhists, Falun Gong devotees, and other religious believers,” Pompeo wrote.

“The State Department’s 2019 annual report on religious freedom provides an illustrative example in the story of Father Paul Zhang Guangjun, who was beaten and “disappeared” for refusing to join the CCP-run Patriotic Catholic Association,” he continued.

“Sadly, his experience is not unique. Communist authorities continue to shutter churches, spy on and harass the faithful, and insist that the Party is the ultimate authority in religious affairs.”

Pompeo added that faithful Chinese Catholics are “confused” by the Church’s new legitimization of schismatic priests and bishops “whose loyalties remain unclear. Meanwhile, he fears that the National Security Law in Hong Kong is a harbinger of further intimidation and the full apparatus of state repression against religious believers.

The Secretary of State noted also that Catholics are numbered amongst Hong Kong’s most prominent advocates for human rights, including Martin Lee and Jimmy Lai, whom Pompeo knows personally. He described the State Department’s commitment to religious freedom, and he called upon the Catholic Church to present her own social justice teachings to the Chinese Communist Party.

“The Second Vatican Council and Popes John Paul II, Benedict XVI, and Francis have taught that religious freedom is the first of civil rights,” Pompeo stated.

“Solidarity is one of the four foundational principles of Catholic social doctrine.”

“What the Church teaches the world about religious freedom and solidarity should now be forcefully and persistently conveyed by the Vatican in the face of the Chinese Communist Party’s relentless efforts to bend all religious communities to the will of the Party and its totalitarian program.”

David Mulroney, a former Canadian Ambassador to China, told LifeSiteNews that Pompeo’s message to the Vatican is both “respectful” and “powerful.”

“Secretary Pompeo offers a respectful but very powerful call to the Vatican to use its negotiations with China to advance religious freedom in China,” Mulroney said.

“He does not mince words in describing the extent to which the Sino-Vatican accord, whatever its content, has so far failed to do that.”

Mulroney, who is now a Distinguished Fellow at the University of Toronto's Munk School of Global Affairs and Public Policy, added that Pompeo had paid the Vatican “the ultimate compliment of setting high expectations” for it.

“Many Catholics are left wishing that the Vatican’s own diplomats were as faithful to Church teaching and as mindful of the needs of suffering Chinese Catholics as is America’s Secretary of State,” he said.

“And as a Canadian, I am also deeply envious of the extent to which Secretary Pompeo defends religious freedom as a fundamental human right, something that Canada's foreign policy seems to have forgotten.”

Pompeo, 56, is a Presbyterian.

To thank Mr Pompeo for speaking on behalf of Chinese Christians and other minorities in China, please address your correspondence to, or call: