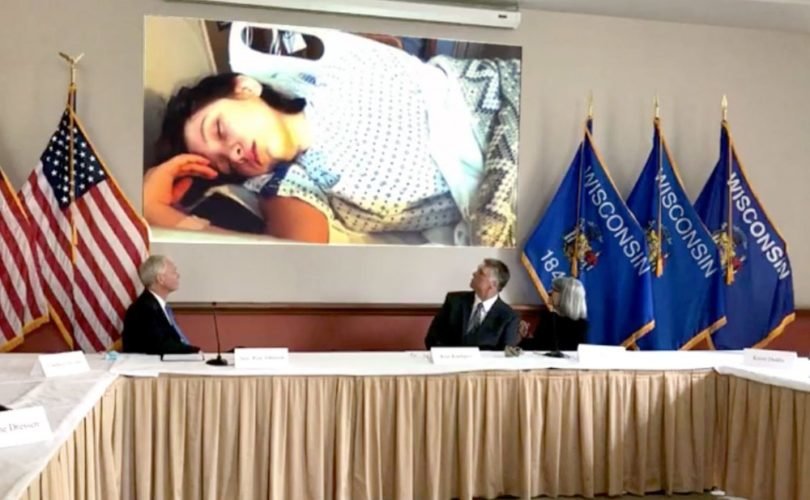 June 30, 2021 (Children’s Health Defense) – Sen. Ron Johnson (R-WI) held a news conference Monday to discuss adverse reactions related to the COVID vaccines — giving individuals who have been “repeatedly ignored” by the medical community a platform to share their stories.

The group that spoke was put together by Ken Ruettgers, a former Green Bay Packers offensive lineman, whose wife suffered an adverse reaction after receiving a COVID vaccine. Ruettgers, who now lives in Oregon, started a website to bring awareness of COVID vaccine reactions to the medical community.

“We are all pro-vaccine,” Johnson said at the onset of the news conference. In fact, Johnson has had every flu shot since the Swine flu, is current on all of his vaccines and was a huge supporter of Operation Warp Speed, though he has not had a COVID vaccine because he already had COVID.

Johnson said his goal was to provide a platform for these individuals who were injured by COVID vaccines so the health community and mainstream media would acknowledge them and get to the root cause — to find a solution for these problems.

Johnson argued that while most people don’t suffer significant side effects following vaccination, he is concerned about “that small minority that are suffering severe symptoms.”

After being part of a Covid vaccine trial for 12-15 year-olds, Maddie has been to the ER 9 times and hospitalized 3 times for a total of 2 months.

Doctors even wanted to put her in a mental hospital saying her symptoms were caused by anxiety. pic.twitter.com/roWxQFMGrK

Five people from across the U.S., including a 12-year-old girl who was part of the Pfizer clinical trial, joined the conference at the federal courthouse in Milwaukee. They described their reactions to the COVID vaccines, including neurological, cardiac and gastrointestinal issues, debilitating health problems and hospitalizations.

Among them was Maddie de Garay from Ohio who volunteered for the Pfizer vaccine trial when she was 12. On Jan. 20, Maddie received her second dose of the Pfizer COVID vaccine as a participant in the clinical trial for 12- to 15-year-olds and is now in a wheelchair.

“Why is she not back to normal? She was totally fine before this,” said Stephanie de Garay, Maddie’s mother. She volunteered for the Pfizer vaccine trial “to help everyone else and they’re not helping here. Before Maddie got her final dose of the vaccine she was healthy, got straight As, had lots of friends and had a life.”

Upon receiving the second shot, Maddie immediately felt pain at the injection site and over the next 24-hours developed severe abdominal and chest pain, de Garay said at the press event.

Maddie told her mother it felt like her heart was being ripped out through her neck, and she had painful electrical shocks down her neck and spine that forced her to walk hunched over.

Maddie’s parents took her to the emergency room as instructed by the vaccine trial nurse administrator. Her labs were taken, she was checked for appendicitis, given an IV with medicine and sent home. The diagnosis in the discharge summary read “adverse effect of vaccine initial encounter.”

Maddie’s condition continued to worsen. Over the next two and a half months her abdominal, muscle and nerve pain became unbearable, her mother said.

At one point doctors tried to admit Maddie to a mental hospital, claiming she had a neurological condition caused by anxiety, her mother explained. That’s when they found others experiencing similar adverse reactions who connected them to medical professionals researching adverse reactions to vaccines.

Maddie’s mother said her daughter — who was sitting next to her during the event in a wheelchair — has been to the emergency room nine times, was hospitalized three times and has spent two months in the hospital.

— Article continues below Petition —
PETITION: No to mandatory vaccination for the coronavirus
Show Petition Text
1081779 have signed the petition.
Let's get to 1100000!
Thank you for signing this petition!
Add your signature:
Show Petition Text

“All we want is for Maddie to be seen, heard and believed because she has not been. And we want her to get the care that she desperately needs, so she can go back to normal,” said de Garay.

Another participant in the news conference was Cheryl Reuttgers. She was in phase one of Oregon’s vaccine roll-out. Four days after receiving her first dose of Moderna she experienced severe neurological complications, which led to a diagnosis of “vaccine-induced-autoimmune-neuropathy” and multiple sclerosis.

“These vaccine injuries are real, but people don’t know. People need to understand that these reactions exist and they need to be researched,” Cheryl said.

Cheryl said she is pro-vaccine, pro-science and pro-informed consent and has called on the U.S. Centers for Disease Control and Prevention (CDC) and U.S. Food and Drug Administration (FDA) to acknowledge neurological injuries being caused by COVID vaccines.

Candace Hayden from Michigan received her first dose of Moderna’s COVID vaccine on March 2 and a second dose on March 30. On April 18, Hayden started experiencing neurological symptoms and was partially paralyzed from her chest down.

“My medical team at the hospital refused to associate my condition with the vaccine, and I continually asked them to report to VAERS [Vaccine Adverse Events Reporting System], but I don’t think that they did. It defies my imagination that we can find each other but the medical community refuses to draw the lines and recognize that people are suffering similar adverse side-effects.

“To date, the medical community remains baffled and unable to restore my health,” Dobbs said. “I hope that our conditions will be researched and studied.”

Dobbs added she would give anything to return to Jan. 17 before she was vaccinated.

Brianne Dressen is a preschool teacher from Utah, who received AstraZeneca’s COVID vaccine during a clinical trial in November 2020. She has since experienced extensive adverse effects from the vaccine that resulted in a medical bill of more than $250,000.

Of those 387,087 reports, 11,584 total adverse events, including 578 rated as serious and nine reported deaths occurred among 12- to 17-year-olds. VAERS is the primary government-funded system for reporting adverse vaccine reactions in the U.S. Reports submitted to VAERS require further investigation before a causal relationship can be confirmed.

During the event, Johnson mentioned the Harvard Pilgrim study showing less than 1% of adverse events are reported to the CDC’s VAERS system.

The senator has faced backlash for holding his press event. Gov. Tony Evers said Friday Sen. Johnson was being “reckless and irresponsible” for holding the news conference and Milwaukee’s health commissioner, Kirsten Johnson, accused Johnson of raising “misleading concerns” about what she called “safe” vaccines that are saving lives.

Johnson pushed back on these comments. “Do you think that’s reckless and irresponsible?,” he said. “I think it’s called compassion. I think it’s showing concern for your fellow human beings who have stepped up.”

Johnson provided a press packet with hundreds of links to other news stories and said a flood of information would be added to his website.