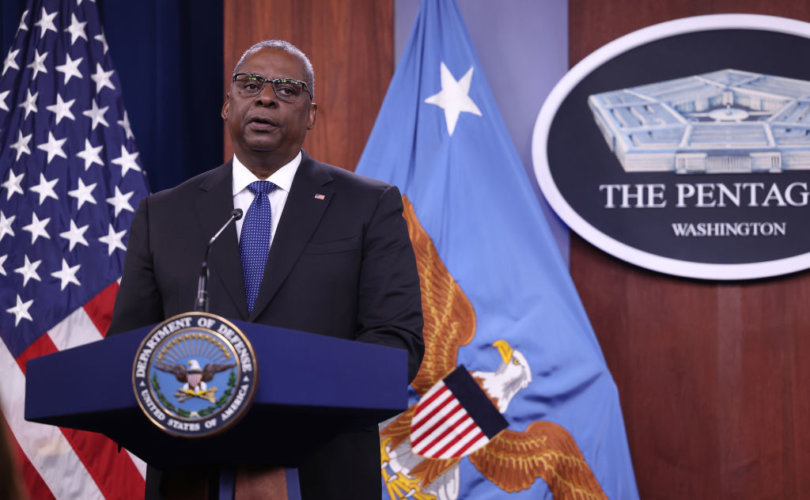 Secretary of Defense Lloyd Austin speaks at a news briefing at the Pentagon on July 20, 2022 in Arlington, Virginia. Anna Moneymaker/Getty Images

(LifeSiteNews) – The U.S. Senate Armed Services Committee is demanding that the Department of Defense (DOD) “immediately” halt its initiative to purge “extremists” from the military.

The recently-published Senate report, which accompanies the 2023 National Defense Authorization Act (NDAA), takes aim at the bill’s proposed initiative to combat “extremism” in the military. At least half a million dollars have been set aside for anti-extremism training and analysis.

The recent Senate report blasted the military’s “anti-extremism” effort as unwarranted, declaring, according to Roll Call, “[t]he committee believes that the vast majority of service members serve with honor and distinction, and that the narrative surrounding systemic extremism in the military besmirches the men and women in uniform.”

“The committee believes that when extremist activity does in fact occur that it must be dealt with swiftly and appropriately; however, the case incident rate does not warrant a Department-wide effort on the issue,” the report continued.

Emily Rainey, a former Army Special Operations psychological warfare officer who was featured in Tucker Carlson’s “Patriot Purge” series, told LifeSiteNews that the money devoted to the anti-extremism effort only “scratches the surface of the massive iceberg that is the new extremism policy.”

The 2023 NDAA, HR 7900, provides for “in person counseling” regarding “extremist activity” for military members who have violated the DOD guidelines on extremism, which now includes in its definition “Advocating widespread unlawful discrimination based on race, color, national origin, religion, sex (including pregnancy), gender identity, or sexual orientation.”

Rainey highlighted that the military’s current extremism policy now punishes “thought crime,” and that “the net that they cast is so incredibly wide” as to encompass “literally every single conservative pundit and conservative American.”

“You’re looking at a slow purification process,” said Rainey, noting that Christian conservatives, who believe, for example, that gender is simply and objectively biological, are being targeted through the military’s current extremism policy.

Among the ways in which a member of the military can violate the extremism provision are donating to an “extremist” group, rallying in support of such a group, and “knowingly displaying paraphernalia, words, or symbols in support of” such a group, “such as flags, clothing, tattoos, and bumper stickers, whether on or off a military installation.”

Upon taking office, President Joe Biden swiftly took action that again put traditional Christians at risk in the military, by reopening the military to “transgender” soldiers.

Rainey, who had submitted her military resignation before 2020 because she “saw the writing on the wall,” told LifeSiteNews that she would be court-martialed if she didn’t allow a soldier to “transition” their sex, something she was trained on.

Rainey told LifeSiteNews that her attendance at the January 6 rally for election integrity was seized upon by the media to help drive the narrative that extremism is a problem in the military, and eventually by the DOD itself. At the time, left-wing pundits used incidents of violence and property damage that occurred at the Capitol to lump every rally attendee — the vast majority of whom were peaceful and law-abiding— into an “extremist” category.

According to Rainey, by the time the DOD had ordered a Stand-Down “to address extremism in the DOD” on February 1, 2021, she was the only active-duty military member known to be present at the January 6 rally that was being broad-brushed as a radical “insurrection.”

Pentagon Press Secretary John F. Kirby suggested at the time that the Stand-Down was prompted by the finding that active duty military as well as veterans had “stormed the Capitol” on January 6.

Rainey, who led a group of about a hundred mostly middle-aged and older women to the rally, had not herself entered the Capitol, was completely law-abiding, and had informed her superiors of her attendance to the rally. It had also been over a year since she had submitted her resignation, which was backed up in processing due to COVID-19.

Moreover, those she led to the Capitol were members of a non-partisan group called Moore County Citizens for Freedom. However, it was widely publicized that Army officials were investigating her trip to the Capitol.

As part of the Stand-Down, the DOD had launched a Countering Extremism Working Group (CEWG) to be headed by Bishop Garrison, who had previously branded all Trump supporters as extremists, tweeting in 2019, “…any supporter of former President Donald Trump unequivocally supports extremism and racism… There is no room for nuance with this.”

The CEWG’s subsequent report “didn’t actually list which groups would be considered extremist,” NPR admitted, although it held military members “responsible for what they do on social media.” The group found 100 incidents of “prohibited extremist activity” among 2.1 million active and reserve military, “or a case rate of 0.005%,” The Washington Times reported.

The recent Senate report pointed out that real military extremism is highly uncommon, stating, “Spending additional time and resources to combat exceptionally rare instances of extremism in the military is an inappropriate use of taxpayer funds, and should be discontinued by the Department of Defense immediately.”

The report is “non-binding” and subject to removal from the final NDAA, and has been under fire from congressional Democrats. Army veteran Bill Braniff, director of the University of Maryland’s National Consortium for the Study of Terrorism and Responses to Terrorism (START), insisted the “policing of anti-government extremism” is necessary for the “good order and discipline” of the military, citing specifically the problems of “white supremacy, support for jihadism, misogynist extremism,” and “anti-LGBTQ+ extremism.”