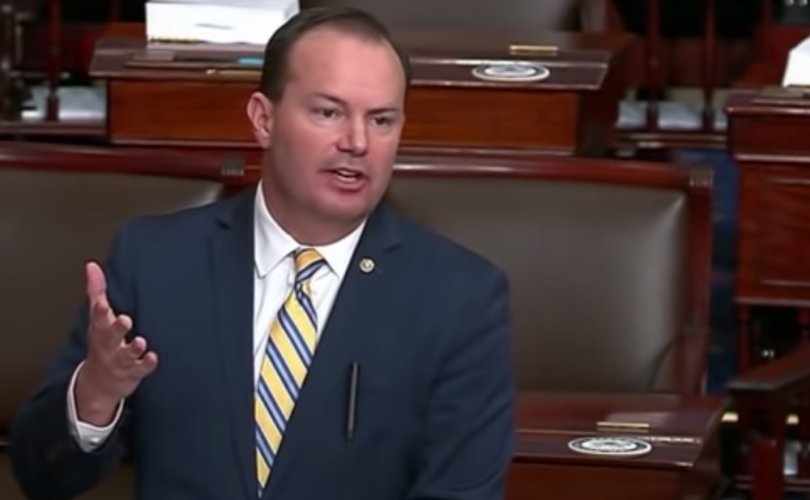 Lee lamented that Democrats had objected to his resolution and insisted when the Senate returns from its recess it is “not just going to be debating non-binding resolutions.”

“It's long past time to expose the shiftless idiocy of the anti-American, anti-science, anti-establishment, anti-constitution mob and remove their snouts from the federal trough,” the senator said.

“Colleges and universities that punish free speech and discriminate against conservative and religious students; city council's who defund their police departments and refuse to protect public safety; states that force doctors to mutilate confused children without their parents’ consent; school districts that embrace the ahistorical nonsense of the ‘1619 Project’; the smug sneering privilege of all the above and much more — the whole garbage fire that is the so-called woke ideology depends on federal money,” Lee blasted.

Earlier this month, Lee was one of a trio of Republican senators who blocked a move by Democrats to pass the so-called “Equality Act” after the U.S. Supreme Court’s decision — popularly referred to as the “Bostock case” — earlier this month that discovered additional rights for LGBT individuals while threatening to further erode religious liberty protections across the land.

Lee’s proposed resolution had drawn a distinction between “organized legitimate, peaceful, constitutionally protected demonstrations against instances of police brutality and racial inequality” and “mob violence and criminal property destruction, not in service of any just or coherent cause, but simply as an arrogant, bullying tantrum of self-righteous illiberalism and rage.”

The resolution said that the “mobs” have demonstrated their “contempt for public safety” as well as their “manifest ignorance and historical illiteracy … evidenced by their destruction of public memorials to historical heroes like Ulysses S. Grant, St. Junipero Serra, Miguel Cervantes, George Washington, Hans Christian Heg, and a reported plan to target a statue of Abraham Lincoln financed in 1876 entirely by private donations from freed African-American slaves.”

The resolution condemned “the rising tide of vandalism, mob violence, and the mob mentality that feeds it — including its cruel and intolerant ‘cancel culture.’”

But New Jersey Democrat Senator Bob Menendez objected to the resolution, saying it “reeks of a supremacist view” and complained that there was no mention of America’s “original sin, which is slavery.”

Menendez wanted to add a line saying “the President of the United States should not incite violence or legitimize those who engage in hate-fueled acts.”

“People are being shot. Businesses are being looted. Innocent Americans are being attacked and threatened. Lives are being ruined. Communities are burning, literally burning, so whose side are you on?” Lee asked Democrat senators.

When requesting unanimous consent for the resolution, Lee referenced the dispersal of the “Capitol Hill Autonomous Zone” in Seattle by law enforcement this week after a fatal shooting and protesters marching into Mayor Jenny Durkan’s own community.

“Mobs are not going to stop until they are stopped,” Lee said.

“A non-binding resolution is the tiniest first step of a response, the merest exercise of the senate's atrophied institutional muscles. We need to do much, much more and I look forward to working with colleagues on both sides of the aisle developing rep legislation to do it.”