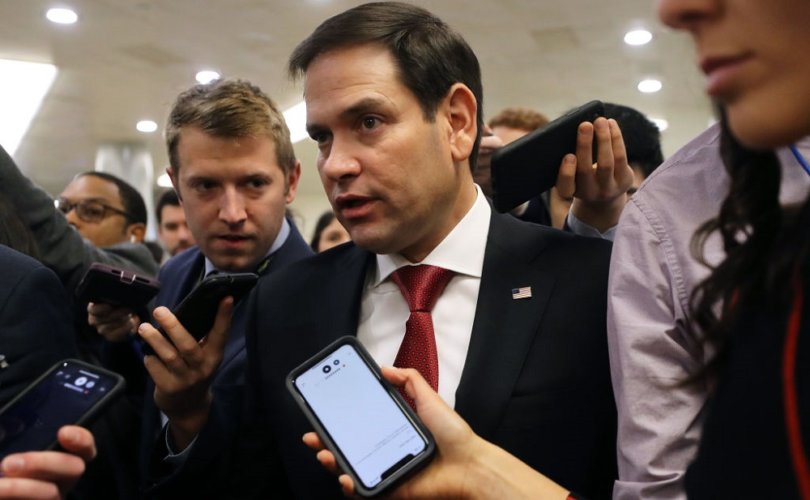 Sen. Rubio, whose proposed amendment was rejected by the entirety of Democrat Senators.Mario Tama / Getty Images

UNITED STATES, April 3, 2020 (LifeSiteNews) — Florida senator Marco Rubio has said “subservience to Beijing” and the Chinese Communist Party (CCP) by the World Health Organization (WHO) has “undermined global health” and “could prove fatal” in the ongoing coronavirus pandemic.

In an article for the National Review, Rubio argues that a series of actions demonstrating the WHO’s “servility” to China could cost lives around the world.

In December, the WHO refused to act on or publicize Taiwan’s warning that the new respiratory infection emerging in China could pass from human to human. In mid January, despite accumulating evidence of patients contracting what we now know as COVID-19 from other people, the organization repeated the CCP’s lie that there was no evidence of human-to-human transmission. In January the WHO, at Beijing’s behest, also blocked Taiwan from participating in critical meetings to coordinate responses to the coronavirus and even reportedly provided wrong information about the virus’s spread in Taiwan. These actions are unacceptable and should not be allowed to continue.

Rubio’s article also highlights a recent online video between WHO assistant director-general Bruce Aylward and a Hong Kong reporter. In the video, Aylward refuses to answer questions about Taiwan — whose sovereignty China denies — and its response to the coronavirus.

‼️WOW‼️ Bruce Aylward/@WHO did an interview with HK's @rthk_news & when asked about #Taiwan he pretended not to hear the question. The journalist asks again & he hangs up!

She calls back & he said “Well, we've already talked about China.”

Rubio says the video is “indicative of a systemic problem within WHO leadership: a subservience to Beijing that comes at the expense of its stated commitment to public health.”

The senator also agrees with biologist and China expert Steven Mosher that Taiwan has provided the world a model response to dealing with the COVID-19 coronavirus.

“Despite the CCP’s suppression of information about COVID-19 and the WHO’s breach of public trust, the Taiwanese have seen low rates of infection, thanks in part to clever preventive strategies put in place after the 2002–3 SARS epidemic — another instance in which a virus from China affected Taiwan,” the senator writes.

“This time, Taiwan implemented a raft of rapid emergency measures such as travel bans, quarantines, and strict social distancing,” he continues.

“When people’s lives were at stake, Taiwan acted to protect them. That is exactly what the WHO should be doing.”

Rubio also pointed to the growing international scrutiny of China’s official figures of their total cases of and deaths from the coronavirus, linking to an article in the New York Times reporting on shipments of thousands of ash urns to crematoriums in Wuhan.

Earlier this week. three unnamed U.S. officials claimed that an intelligence report showed that China has concealed the true number of COVID-19 cases within the country. According to a report in Bloomberg, two of the officials said the report concludes that China’s numbers are fake.