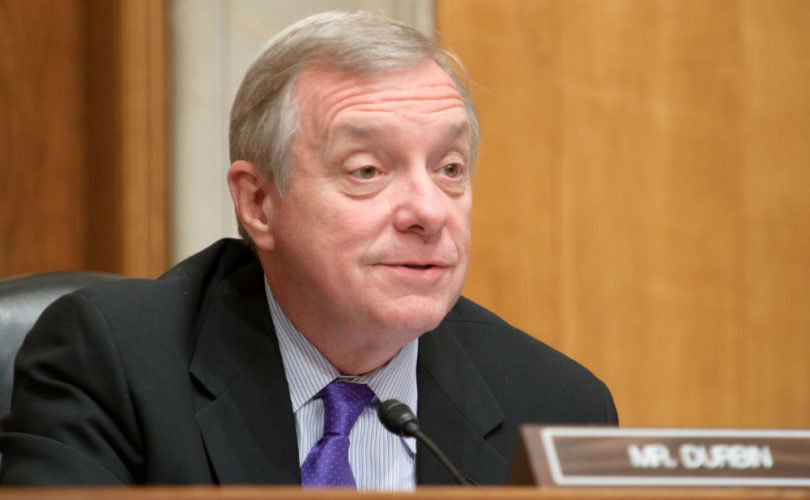 SANTO DOMINGO, December 21, 2015 (LifeSiteNews) – The Dominican Republic’s Cardinal Archbishop Nicolás de Jesús López Rodríguez is raising eyebrows as he turns up the rhetorical heat against homosexual U.S. ambassador “Wally” Brewster and his “husband,” who are accused of meddling in the country’s internal politics and of using their relationship to promote the Obama administration’s homosexual agenda.

The cardinal’s recent tough language against the aggressive pair have led Sen. Dick Durbin, a Democrat who favors abortion and homosexual “marriage,” to write to Pope Francis asking him to correct López Rodríguez.

The latest round between Brewster and the cardinal began in late November, when Brewster reportedly threatened the president of the country’s electoral commission, Roberto Rosario Marquez, with revocation of his U.S. visa if he did not carry out electoral reforms advocated by the ambassador. Later in the week Brewster gave a speech before the country’s chamber of commerce accusing the government of corruption. The ambassador’s actions sparked outrage in a country that is wary of American meddling in the nation’s internal affairs.

While López Rodríguez acknowledged that corruption exists in the country, he accused Brewster of promoting his own kind of corruption in a press interview on December 2, noting that the ambassador is “seeking to introduce an agenda in the country that has nothing to do with his diplomatic functions, such as promoting gay, transvestite, transsexual and bisexual activism,” in the words of the Dominican newspaper Listin Diario.

“The man should go back to his embassy, and as a wife of a man, he should take care of his home,” retorted the cardinal in a sarcastic reference to Brewster’s sex partner Bob Satawake, whom Brewster takes with him to official functions, and whom he calls his “husband.”

Brewster has repeatedly used his position as ambassador to further the Obama administration’s policy of pressuring poor Carribean nations to capitulate to the gay agenda, and even made a video in 2014 with Satawake to celebrate “LBGT Pride Month” on the island. He has also flown the homosexualist rainbow flag over the embassy.

The presence of Brewster and Satawake has been widely regarded in the Dominican Republic as a provocation and an insult to the moral values of the country, which is largely Catholic and includes a lively Evangelical Protestant minority. The arrival of the couple led to calls for a nationwide protest by Christians called “Black Monday,” in which black ribbons were worn to express rejection of the appointment.

López Rodríguez added that he wasn’t afraid of Brewster revoking his U.S. visa. “I don’t care about traveling, nor does an American visa matter to me,” he said. “I have two visas, one for my diplomatic role which recognizes me as a cardinal, and another which has not expired. With the greatest pleasure I would surrender the visa to the ambassador.”

Brewster responded two days later by dismissing the cardinal’s comments as “noise,” and implying he was guilty of inciting “hate” and “discrimination.” “I think that hatred and marginalization take many forms, and this isn’t specifically directed at his comments, but I think that when you marginalize anyone, people with disabilities, women, LBGT individuals, you put them in a box, you minimize their value, their possibility of expressing themselves,” he said.

Asked about Brewster’s remarks two days later, the cardinal made his disgust apparent, accusing the ambassador of seeking to introduce his “faggery” (mariconería) into the country.

“Why should we put up with such a thing, an ambassador who is a fag?” said López Rodríguez. “No, man, no, he should go home, he has no business meddling here.”

The cardinal’s interventions led Sen. Durbin, who has defended homosexual “marriage” in the United States, to write to Pope Francis on December 15 asking him to act against López Rodríguez.

Durbin, who identifies himself as a “Catholic,” calls Brewster his “personal friend,” and complains of the cardinal’s strong language. He claims that “The Church’s teachings on gay marriage are well known but the Church also teaches us to show tolerance for those with different sexual orientations. The intolerant public statements of Cardinal Rodriguez are inconsistent with that clearly stated value.”

The Catechism of the Catholic Church, a compendium of Catholic doctrine approved by Pope John Paul II, condemns homosexual acts as “intrinsically disordered,” but says nothing about “tolerance” of such behavior. The Church’s 2003 statement on homosexual unions warns that “tolerance might be exploited or used in the service of ideology,” reminding governments “of the need to contain the phenomenon [of homosexual behavior] within certain limits so as to safeguard public morality and, above all, to avoid exposing young people to erroneous ideas about sexuality and marriage that would deprive them of their necessary defences and contribute to the spread of the phenomenon.”

Although Brewster’s defenders have repeatedly claimed that he is not in the Dominican Republic to promote the homosexual agenda, the U.S. State Department admitted in a response to the cardinal’s statements that Brewster is carrying out the government’s pro-LBGT policies.

“U.S. policy is dedicated to eliminating barriers to equality, fighting discrimination based on sexual orientation and gender identity, and engaging LGBTI communities around the world,” said State Department Spokesman Pooja Jhunjhunwala in an interview with the Washington Blade, a homosexual publication based in Washington, D.C. “Ambassador Brewster, like all U.S. ambassadors, advances this policy along with many other aspects of our bilateral relationship.”

Cardinal López Rodriguez’ tough stands have resulted in great setbacks for the international abortion lobby, which attempted to achieve a legislative reform in 2007 that would have legalized abortion in the country. Following a series of protests led by the cardinal, the national legislature instead approved a constitutional amendment prohibiting abortion altogether in 2009. That amendment was then used to nullify an abortion legalization measure passed in 2014.