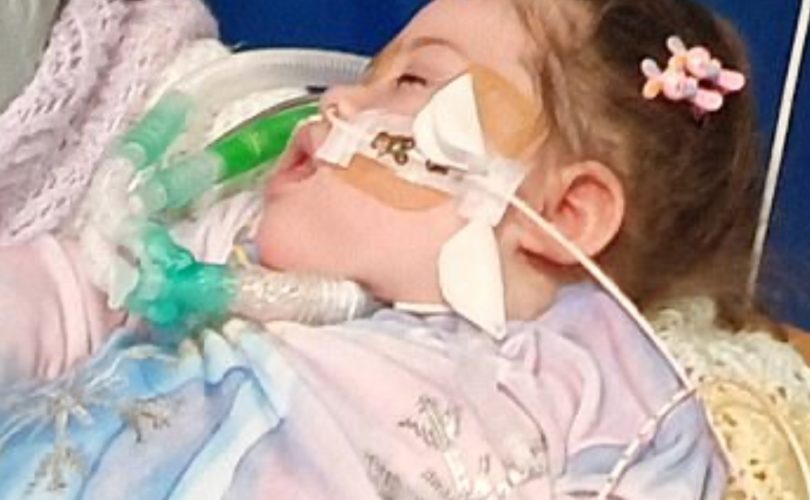 LONDON, England, June 22, 2021 (LifeSiteNews) — Both American and Israeli lawmakers have spoken up against the planned passive euthanasia death of a brain-damaged two-year-old Orthodox Jewish girl in England.

U.S. Republican Senators Marco Rubio, Mike Lee, Ben Sasse, Steve Daines, James Lankford, Josh Hawley, Lindsay Graham, Mike Braun, James Inhofe, and Ted Cruz have all written to Joe Biden asking him to speak to Britain’s Prime Minister Boris Johnson about permitting Alta Fixsler to leave the U.K. and be cared for by a hospital in either the U.S. or Israel.

The senators cited the objections of Alta’s parents to last month’s High Court decision to permit the Manchester University National Health Service (NHS) Foundation Trust to cease treating the girl. The NHS had successfully argued that the child, who cannot eat, drink, or breathe without medical assistance, would never recover and that death was in her “best interests.” The senators also noted that one of Alta’s parents – her father – is an American citizen.

“We are profoundly troubled that the child of an American citizen is being treated this way in a country with whom we have a deep alliance and special relationship,” the senators stated.

“As parents, it is Mr. and Mrs. Fixsler’s right to fight to keep their daughter alive,” they continued.

“It is unacceptable that people in government think they, not parents, should decide what is in the best interest of a child, even in a matter of life and death.”

“The hospital has petitioned the Supreme Court for permission to disconnect Alta from the device to which she is connected, which will result in her death,” Edelstein wrote.

“’According to a legal opinion attached to the request on behalf of the family members, and in our opinion acceptable, according to Israeli law in circumstances where the parents oppose the cessation of medical treatment that could lead to the child's death and that life expectancy exceeds six months – medical treatment must not cease,” he continued.

“Alta's parents are Orthodox Jews and Israeli citizens, living their lives according to Hebrew law, and they are interested in transferring Alta to one of the two hospitals in Israel that have expressed a willingness to treat her. I would appreciate if you could help the Fixsler family bring Alta further treatment in Israel.”

Not to be outdone, Israel’s new president, Reuven Rivlin, has written to the Prince of Wales, asking for his assistance in saving Alta’s life.

The high-profile requests follow May’s High Court decision to allow the Manchester University NHS Foundation Trust to remove all life-support from the youngster. Alta suffered brain-damage during her birth, and lawyers for the NHS say that she will never recover.

Mr Justice Alistair MacDonald of the High Court ruled that it was in the child’s “best interests for the treatment that is currently sustaining her precious life now to be withdrawn.” He said also that there would be “no medical benefit” in Alta being taken to Israel, for she has “no prospect” of recovery.

The judge accepted medical testimony that the child cannot feel pleasure but does experience pain and distress. He thought taking the baby to Israel would cause her more pain. Meanwhile, he indicated that “secular legal principles” overrule the parents’ religious objections.

“The parents cannot be criticised for having reached a different decision informed by the religious laws that govern their way of life,” MacDonald said.

“But applying the secular legal principles that I must, and according due respect to the deeply held religious convictions of the parents, I cannot agree with their assessment and am required to act accordingly,” he continued.

“It is not in the best interests of Alta for life-sustaining medical treatment to be continued, and … it is in her best interests for a palliative care regime to be implemented.”

The story of a brain-damaged child in England in danger of a passive euthanasia opposed by both his or her parents and officials overseas is a now familiar one. Tom Evans, the Catholic father of Alfie Evans, appealed to Pope Francis on behalf of his almost two-year-old son in 2018, and the pontiff did indeed ask for prayers for the youngster. Both Polish and Italian hospitals were willing to treat the brain-injured boy, but the British courts refused to release him. Alfie died four days after he was removed from a ventilator. In the 2017 case of Charlie Gard, Pope Francis, President Donald Trump, and 37 European MPs sided with the infant’s parents against the British courts that agreed to allow the NHS to withdraw his life support. Almost one-year-old Charlie died 12 minutes after he was removed from a ventilator.

Tafida Raqeeb, then five years old, made headlines in 2019 when her Muslim parents fought the Barts Health NHS Trust’s request to stop treating the brain-damaged girl. Once again, an Italian hospital offered to treat the sick child, and in this case the judge – Mr Justice Alistair MacDonald – ruled that the child could be allowed to live and taken to Italy for treatment. In 2021, however, six-year-old Pippa Knight was not permitted to live despite the wishes of her widowed mother Paula. Pippa died in May after doctors removed her life support.

The British courts do not consider the removal of life support from brain-injured people who cannot breathe, eat, or drink without medical assistance to be euthanasia.