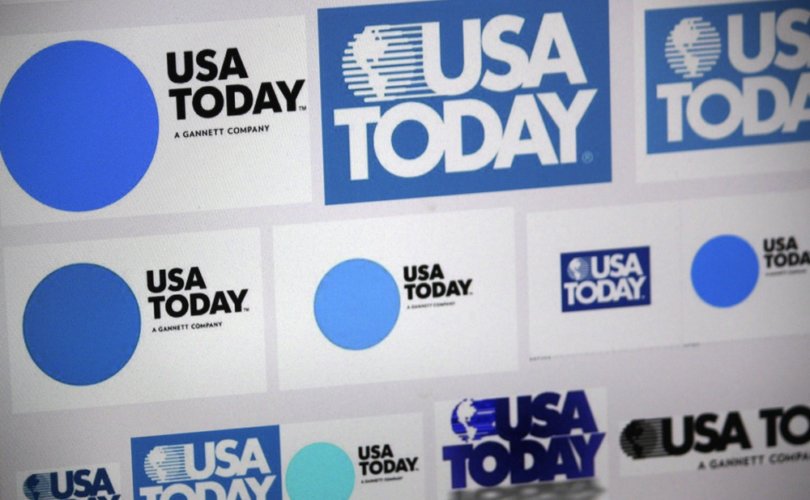 (LifeSiteNews) — Left-wing legacy news outlet and Facebook fact-checking partner USA Today was forced to scrub almost two dozen articles from its website last week after an investigation found that a reporter had apparently fabricated her sources.

USA Today, which joined Facebook’s Third-Party Fact-Checking Program in March 2020 to identify and flag online “misinformation”, reported Thursday that it had removed 23 articles written by reporter Gabriela Miranda after an audit triggered by an external correction request. Some of the articles promoted left-leaning ideology and attacked the Texas Heartbeat Act as well as criticizing COVID “anti-vaxxers.”

USA Today reported said it took down 23 articles from its own website and other platforms because reporter Gabriela Miranda appears to have included fabricated sources in the articles. https://t.co/tubQdLZtq8

“The audit revealed that some individuals quoted were not affiliated with the organizations claimed and appeared to be fabricated,” the newspaper said in a statement. “The existence of other individuals quoted could not be independently verified. In addition, some stories included quotes that should have been credited to others.”

“We strive to be accurate and factual in all our content and regret this situation,” USA Today, which is owned by parent company Gannett, added.

In addition to allegedly faking sources and inaccurately attributing quotes, Miranda also “took steps to deceive investigators by producing false evidence of her news gathering, including recordings of interviews, according to the person briefed on the inquiry,” The New York Times reported.

In a 2020 statement after USA Today became a fact-checking partner for Facebook, Gannett Vice President of Digital Distribution Caroline Harris said that “[p]roviding the nation with factual information is core to what our journalists do every day at Gannett and USA TODAY.”

“Therefore, it wasn’t a question of if we would join Facebook’s fact-checking program, but when,” she said.

According to USA Today, Miranda has since resigned. Her articles have been pulled from the newspaper’s website and other platforms for failing to meet the outlet’s editorial standards. Miranda also appears to have deleted her LinkedIn and Twitter accounts amid the audit and her resignation.

While most of Miranda’s articles did not concern news of major national or international significance (headlines included ‘Friends are also family’: How the unofficial holiday Friendsgiving has grown, and McDonald’s employee leaps out of drive-thru window to save woman choking on a chicken nugget), several of her pieces took a left-wing angle on major political issues, including COVID-19 treatments and Texas’ pro-life Heartbeat law.

In a September 2021 article headlined: “Texas abortion ban could lead to stockpiling contraceptives and pregnancy tests,” Miranda quoted several individuals, including an alleged “sex worker” who reportedly began stockpiling contraceptives for Texas women after the enactment of the Texas Heartbeat Act, which bans abortions after six weeks’ gestation.

Toward the end of the article, Miranda quoted the FDA in noting there had also been a “growing interest in a drug called ivermectin for the prevention or treatment of COVID-19 in humans.”

Miranda cited the FDA in arguing that “only certain formulas of ivermectin have been approved to treat parasites in animals.”

However, the FDA had stated in the same article referenced by Miranda that “Ivermectin is approved for human use to treat infections caused by some parasitic worms and head lice and skin conditions like rosacea.”

Articles withdrawn by USA Today have been replaced with an editor’s note reading: “This story has been removed from our platforms because it does not meet our standards.”

The news organization’s decision to scrap the offending articles come amid widespread discontent among conservatives with so-called “fact-checking” organizations, which many see as being biased.

According to a 2019 Pew Research study, 70% of Republican respondents said they thought fact-checkers favored one side over the other, compared with 28% of Democrat respondents.

Late last year, a BuzzFeed investigation found that David Mikkelson, the co-founder of fact-checking website Snopes, had published “dozens of plagiarized articles” on the site between 2015 and 2019. Snopes had served as a fact-checking partner for Facebook from late 2016 to early 2019.