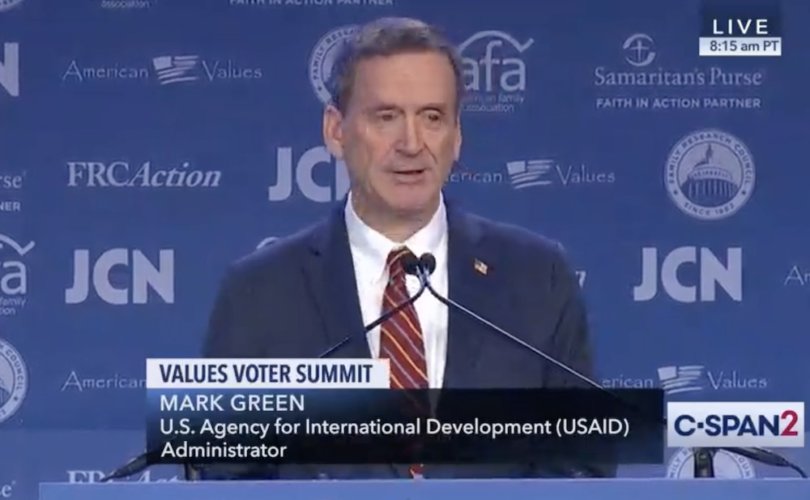 After calling faith a “source of strength and inspiration” that is “woven into the fabric of American history,” the recognition of which is an “expression of American compassion,” Green lamented how “in today’s world, too many people in too many places are attacked and persecuted merely for exercising this human right.”

He went on to detail ISIS waging genocide against Christians and other religious minorities in northern Iraq, Communist China’s use of reeducation camps to “strip [Uyghur Muslims] of their individuality, identity, and faith,” the resurgence of the “old scouge of anti-Semitism” across Europe, Nicaraguan dictator Daniel Ortega ordering assaults against churches willing to speak out against the regime’s human-rights violations.

“We cannot be indifferent, we must not be indifferent, and I am here to reaffirm that the Trump administration will never be indifferent when it comes to the persecution of faith communities,” Green declared. “All over the world, USAID is supporting programs to address religious hate speech and interfaith conflict, to promote the strengthening and enforcement of laws that protect religious freedom and increase the capacity of civil society to advocate for it.”

He said the agency has provided $400 million for religious-persecution relief efforts, working with dozens of local partners, faith-based organizations, and international groups to provide humanitarian relief in places like northern Iraq. He also announced a new grant of $5 million to several universities including Purdue and Notre Dame to “assess the agricultural damage done by ISIS that is impacting traditional cultural practices of persecuted communities.”

“But there is another way USAID is working to protect religious liberty,” Green continued. “We have been undertaking reforms to our partnership and procurement process to tear down barriers and burdens that too often push the faith community and local groups away. That too often call upon faith-based organizations to surrender their faith character.” These groups, he explained, can “reach corners where governments cannot effectively go” and act as “uniquely trusted voices” in “forgotten communities.”

Green concluded by calling on the United States “to take up the mission that the world’s great faith traditions call for, to lift lives and build communities for believers and nonbelievers alike, in the words of John the Baptist, to share a tunic with him who has none.”

President Trump has made religious liberty a priority of his administration. He has hired social conservative champions such as Roger Severino to influential positions in the bureaucracy, lifted his predecessor’s mandate forcing religious groups to fund contraception, established a new White House office tasked with fielding the concerns of religious Americans and monitoring threats as they arise, and rebuked the international community for preaching “diversity” on matters such as homosexuality while largely neglecting the plight of religious minorities around the globe.