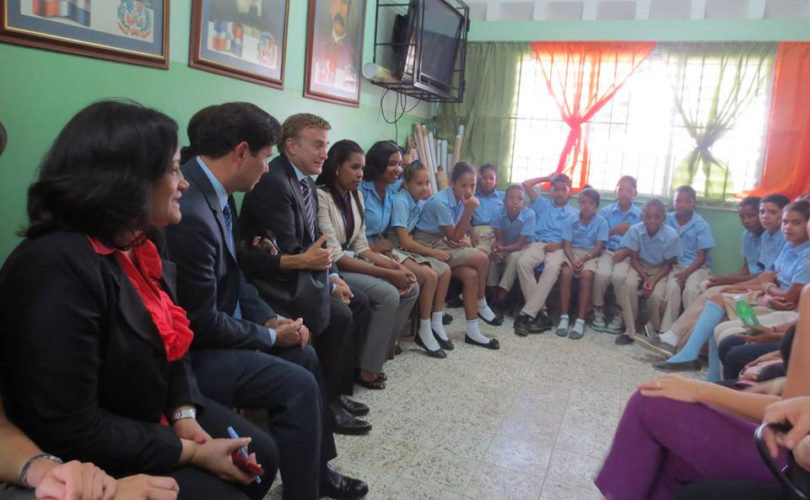 Wally Brewster, US Ambassador to the Dominican Republic, visits a school with his homosexual 'spouse.'

March 3, 2016 (LifeSiteNews) – Alexandria L. Panehal, Mission Director for USAID in the Dominican Republic, told reporters at a press conference yesterday in the capital of the Caribbean nation that the United States Agency for International Development will be spending $1 million to finance the promotion of the LGBT agenda, including contributions to LGBT politicians who wish to participate in the upcoming elections.

“We have established two funds through USAID in order to finance these activities throughout the world, and thanks be to God the Dominican Republic won the grant that has made it possible for us to strengthen the efforts on behalf of the LGBT community,” stated Ms. Panehal.

The website of USAID proudly includes a section entitled USAID LGBT Vision for Action under it's “What We Do” page.

In a memorandum which lays out the agency's mandate to impose sexual immorality upon the world, the agency cites the “groundbreaking Presidential Memorandum, [in which] President Barack Obama directed USAID and all federal agencies engaged abroad to ensure that the United States promotes and protects the rights of LGBT people.”

The Dominican Republic has been a special target of the Obama administration's foreign policy LGBT agenda as evidenced by the appointment of the first “married” homosexual ambassador, Wally Brewster, sent to influence the Caribbean nation that currently outlaws homosexual unions along with polygamous unions and other disordered sexual behavior as harmful to society.

The ambassador has made it a point to appear in public with his homosexual “spouse” and even regularly tours schools with the “spouse” in order to desensitize the young children to his sexual immorality.

Local activists are at a loss as to what to do, as the United States government appears willing to use the full force of the government to coercively promote an agenda that is not supported by the people but which cannot be opposed without risking the loss of vital financial resources.