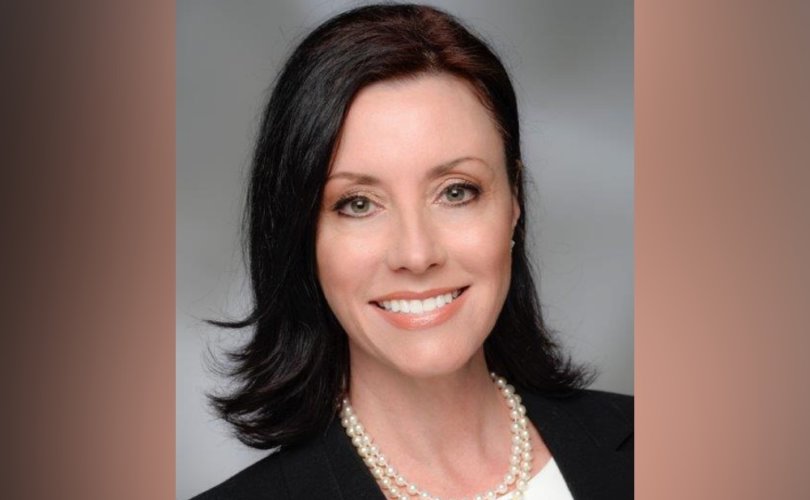 WASHINGTON, D.C., August 27, 2019 (LifeSiteNews) – The United States Conference of Catholic Bishops (USCCB) has replaced its public affairs director a month after she was put on leave amid controversy over her criticism of Democrats and support for President Donald Trump on social media.

Judy Keane was the USCCB’s public affairs director since 2016 until she shared pro-Trump tweets on her personal Twitter account that roiled “liberal” Catholics.

The USCCB announced Thursday it had appointed the Archdiocese of Washington’s Director of Media and Public Relations, Chieko Noguchi, as Director of its Office of Public Affairs. Noguchi spent the last ten years with the Washington archdiocese, as its media and PR director since 2011, and will begin in her new role September 9.

LifeSiteNews did not hear back on an inquiry to the USCCB on Keane’s departure.

Catholic observer Dr. Deal Hudson, publisher and editor of The Christian Review, wasn’t surprised by Keane’s exit. Hudson, who has performed Catholic outreach for a number of Republican presidential campaigns, has observed a preference for backing Democrats with the USCCB.

“Judy Keane should have known better,” Hudson told LifeSiteNews, “but an investigation of other USCCB employees would undoubtedly find expressed support for Democrats, if they haven’t been deleted by now.”

A July 10 piece critical of Keane’s tweets by former USCCB staffer John Gehring in left-leaning Commonweal inferred they were indicative of a “general shift to the right over the past fifteen years” on the part of the Bishops’ Conference.

The article by Gehring, who now works for the George Soros–associated social justice group Faith in Public Life, prompted some social media posts that were likewise critical of the tweets.

Neither Noguchi nor USCCB Chief Communications Officer James Rogers would confirm for the Washington Post on Thursday why Keane left. However, Rogers told the Post in an email that Keane, “will not be returning to her duties at the USCCB so that she may pursue new professional opportunities.”

On July 31 Whispers in the Loggia’s Rocco Palmo tweeted that his sources indicated Keane had been ousted the week before.

In its original July 11 article, the Washington Times said Keane had “stir(ed) debate with a series of tweets enthusiastically backing President Trump and striking out at Democrats including Rep. Alexandria Ocasio-Cortez of New York and Sen. Kamala Harris of California.”

The report detailed various tweets and likes by Keane that some liberal Catholics had found problematic.

Regarding Harris, she responded to the California senator and Democratic presidential hopeful’s March tweet promising a raise for teachers with, “She’ll be promising all kinds of things to get elected. Then she’ll raise taxes so hardworking Americans have to pay for it all. No thanks.”

Keane, who had roughly 300 Twitter followers, according to The Washington Times, had posted the tweets and likes on her personal account, which identified her as “dir public affairs, US Conference of Catholic Bishops. Opinions expressed are my own.”

Her account was set to private sometime during the controversy earlier this summer. It had been deactivated as of last week. She was not reachable for comment.

‘Judy is on leave this week’

A USCCB tweet on August 22, 2016, announcing Keane’s arrival at the Bishops’ Conference remained on Twitter as of press time – however, the 2016 USCCB news release on Keane taking on the role of public affairs director was gone from the USCCB website.

In addition to being a communications and public relations executive, Keane is a columnist, author and speaker, and used her work in these areas for philanthropy as well.

“Her active involvement in humanitarian relief efforts in refugee camps in Bosnia-Herzegovina, led her to work also as an English professor and write and produce documentaries on the needs of Balkan war refugees,” the USCCB article said.

“Judy brings an impressive wealth of professional experience in communications, I’m confident that she will bring valuable service to the Conference,” Rogers said at the time.

When the controversy over Keane’s tweet erupted in July, Rogers had told the news outlet, “The bishops, not staff, set the conference’s federal policy positions.”

“We should be mindful not to create confusion as to where the bishops might be on any particular federal policy issue,” Rogers said. “The conference is nonpartisan and does not endorse political candidates. We take this very seriously. Judy is on leave this week.”

Gehring opened his Commonweal piece noting that editor-in-chief and director of the U.S. bishops’ Catholic News Service Tony Spence had been asked to resign in 2016 by the Bishops’ general secretary following controversy over Spence’s problematic tweets supportive of gay “marriage” and also critical of a bathroom privacy law – Gehring clearly supportive of Spence and his tweets.

Catholic League President Bill Donohue reacted to Gehring’s piece in a statement saying that Gehring had animus toward his former employer and no moral standing to criticize Keane.

Dr. C.C. Pecknold, associate professor of theology for the Catholic University of America, and a columnist at the Catholic Herald, voiced concern in the matter over freedom of speech.

While Keane’s exit didn’t garner headlines beyond many Catholic watchers due to its quiet handling by the USCCB, some laity did notice and comment.

“Silent no more,” one Twitter user said. “USCCB has caved to liberals’ demands that this employee be fired for personal tweets supporting the most pro-life US President ever.”

“Faithful Catholic news agencies should be vigorously covering the injustice that has been dealt to Judy Keane by the “non-partisan” USCCB,” said another. “For those of you unaware of the situation: Judy (now former spokeswoman for the USCCB) committed the high-crime of being supportive of Trump.”

Dr. Christopher Manion, a Knight of Malta who lives in the Arlington diocese, doesn’t find the appointment of Keane’s replacement reassuring.

It’s troubling enough that a professional at the Catholic Bishops’ Conference should be dismissed for praising initiatives not in line with the Bishops’ priorities on her personal social media account, Manion remarked, “But it’s even more distressing that her replacement should come from a chancery that has a history of stonewalling and deflection.”

Manion has focused on Latin American issues for fifty years, both on Capitol Hill and in academe.

“The bishops’ immigration agenda just gives pro-abortion Democrats moral cover,” he said. “Meanwhile, they never oppose USAID’s population control programs because they get a billion a year from the taxpayer, thanks to the Democrats.”

“They have to get out of the government trough,” he added. “There are a hundred pro-abortion Catholics on both sides of Capitol Hill. The bishops have to stand up to them, not cave in to them.”

Manion, a longtime staff director on the Senate Foreign Relations Committee, who has also taught in the departments of politics, religion, and international relations at Boston University, the Catholic University of America and Christendom College, cautioned in the wake of Keane’s departure regarding more of the same from the Bishops in terms of politics and absence of accountability in the Church’s sex abuse crisis.

“The conference desperately needs a clean break,” he said. “They promised transparency and they’re just pushing the Democrats’ political agenda instead. Has McCarrick been interviewed? What about Archbishop Viganò’s charges?”