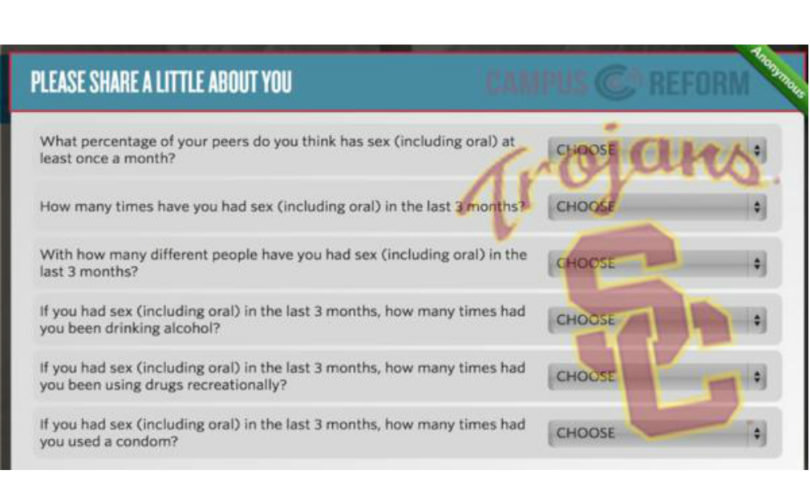 January 13, 2016 (LifeSiteNews) – The University of Southern California has raised eyebrows by requiring all students to complete an online course in which they are asked to describe their recent history of sexual behavior, which the school claims is necessary for compliance with federal law requiring campus instruction on sexual harassment.

“To help create a safe environment for you and other students, you must complete an online course by CampusClarity,” the school stated in a letter sent by email to students. “This course is mandatory, and you must complete it by February 9, 2016. If you do not complete the training by this date you will receive a registration hold until the training is complete.”

According to screen shots provided by Campus Reform, the computer course asks students questions such as:

The course seeks to address the ongoing problem of rape and sexual aggression on college campuses, often associated with unchaperoned youth who mix freely with the opposite sex at parties where alcohol is freely imbibed. Before the 1970s, universities generally sought to prevent such situations by separating the sexes and imposing curfews on women’s dormitories. However, in recent decades universities have created co-ed dormitories and most now merely seek to ensure that all sexual interaction is “consensual.”

The USC course advises students on “how to ask for consent” and “lists possible verbal and physical indicators their sexual partners may provide,” according to Campus Reform. “Students are told to look for physical signs such as ‘crossing arms’ or ‘lack of eye contact’ as an indication a partner does not want to have sex. Only verbal signs, however, indicate a partner does want to have sex.”

USC claims in its email to students that the course is “educational training” that is necessary for “compliance with the Violence Against Women Reauthorization Act ‘VAWA’, a federal law that requires specific types of training and education.” However, the text of the law displayed on the United States Government Printing Office website does not require that students divulge their personal sexual habits.

In the face of adverse press coverage of the program, USC quickly issued a statement to the Daily Caller apologizing for the questions and calling them “optional.”

“USC apologizes for any offense or discomfort caused by optional questions included as part of a mandatory on-line training for students on sexual consent, misconduct and other important issues,” USC vice president for administration Todd Dickey wrote. “These questions have been removed from our online-training module.”

The organization that composed the sexual harassment course, Campus Clarity, has a reputation for asking the invasive questions. A similar controversy ensued in 2014, when Clemson University required students to answer a similar questionnaire created by Campus Clarity. After the requirement caused a stir, Clemson suspended the program.

Following the report by Campus Reform, Campus Clarity issued a press release defending the questions, which they say are optional and are accompanied by a “no comment” option. The organization adds the data that is given by students is not personally identifiable, and can be used by administrators to better understand the sexual habits of the student population in general.