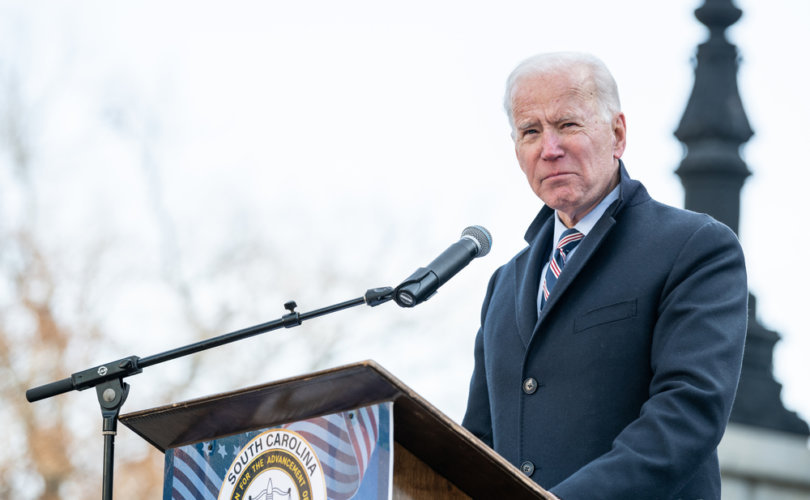 While the so-called Mexico City Policy was put in place by then-President Donald Trump (and other Republican presidents in the past), Democrats had always revoked the policy. The Trump administration had even expanded the Mexico City Policy. By overturning it, Biden has freed up U.S. government money to organizations performing and lobbying for abortions around the world.

Archbishop Joseph F. Naumann of Kansas City, Kansas, chairman of the USCCB’s Committee on Pro-Life Activities, and Bishop David J. Malloy of Rockford, Illinois, chairman of the Committee on International Justice and Peace, criticized the executive order: “It is grievous that one of President Biden’s first official acts actively promotes the destruction of human lives in developing nations.”

“This Executive Order is antithetical to reason, violates human dignity, and is incompatible with Catholic teaching,” the bishops stated, before urging Biden to “use his office for good, prioritizing the most vulnerable, including unborn children.”

The statement continued with the USCCB offering assistance to the new administration to protect the lives of the innocent: “(T)he Catholic Church stands ready to work with him (Biden) and his administration to promote global women’s health in a manner that furthers integral human development, safeguarding innate human rights and the dignity of every human life, beginning in the womb.”

The bishops explained, “To serve our brothers and sisters with respect, it is imperative that care begin with ensuring that the unborn are free from violence, recognizing every person as a child of God.”

As Biden took office, the USCCB released a statement drawing attention to his ardent support of abortion, contradicting the timeless teaching of the Catholic Church to which Biden professes membership.

Archbishop José H. Gomez of Los Angeles, president of the USCCB, warned in the statement that “our new President has pledged to pursue certain policies that would advance moral evils and threaten human life and dignity, most seriously in the areas of abortion, contraception, marriage, and gender.”

Singling out the “injustice of abortion” as the “preeminent priority,” Gomez added that “as Pope Francis teaches, we cannot stay silent when nearly a million unborn lives are being cast aside in our country year after year through abortion.”

Galvanizing his position on the unborn, Gomez described abortion as “a direct attack on life that also wounds the woman and undermines the family.”

“It is also a matter of social justice. We cannot ignore the reality that abortion rates are much higher among the poor and minorities, and that the procedure is regularly used to eliminate children who would be born with disabilities.”

“My hope is that we can begin a dialogue to address the complicated cultural and economic factors that are driving abortion and discouraging families … If the President, with full respect for the Church’s religious freedom, were to engage in this conversation, it would go a long way toward restoring the civil balance and healing our country’s needs,” Gomez wrote.

Any hope for dialogue with Biden on protecting the unborn has been severely diminished since he signed the executive order rescinding the Mexico City Policy.

Despite Biden professing to be a Catholic at the same time as promoting the pro-abortion agenda, Cupich argued that “there is seemingly no precedent” for criticizing the president.

Pope Francis, who wrote his own letter extending his “cordial good wishes” to the new president, also saw no need to criticize Biden.