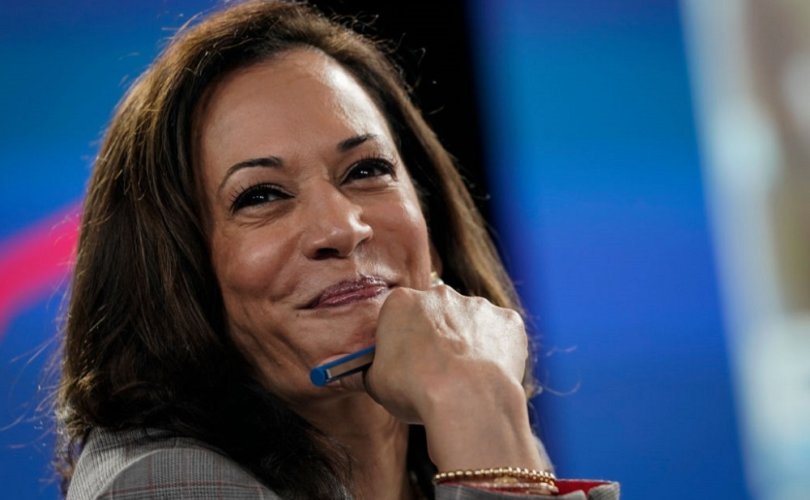 “I was so elated. We, the community, need good news, and this was just wonderful,” Donna Toliver Grimes told Catholic News Service, the official news service of the U.S. bishops’ conference  (USCCB).

Grimes said Harris is “really deserving and brings a lot to the table.”

However, much of what Kamala Harris “brings to the table” is antithetical to Catholicism.

The California senator believes in abortion on demand and fully supports “LGBT rights,” which frequently clash with Christians’ religious liberty.

In an Aug. 16 open letter to the USCCB, Dan Zeidler, head of the Wisconsin-based Family Life Council, an international pro-life and pro-family organization, called it  “unacceptable and deadly” for officials of the USCCB to publicly favor the Democrats.

“People need to understand that given their pro-abortion positions and actions, Biden and Harris are disqualified from public office,” he wrote.

“The bishops and all Catholic Church leaders must unite now with others in a clear, unambiguous message. No candidate who endorses and promotes the current legal situation of abortion is qualified for office,” he added.

LifeSiteNews’s Calvin Frieberg previously reported that as a Senate candidate, Harris  bragged about forcing religiously owned companies and pro-life pregnancy centers to violate their consciences. During Supreme Court justice Brett Kavanaugh’s confirmation hearings, Harris tried to get him to call the Obergefell ruling that forced states to recognize same-sex “marriage” one of the “great moments in the history of the Supreme Court.” In December 2018, she suggested that Trump judicial nominee Brian Buescher’s membership in the Catholic fraternal organization Knights of Columbus was problematic because of its pro-life, pro-marriage stances.

Alarmed that one of its officials was perceived to have spoken out on behalf of the U.S. bishops, James Rogers, chief communications officer for the USCCB, quickly released a strongly worded statement distancing the bishops’ conference from Grimes:

Earlier today, Catholic News Service (CNS) issued a clarification on its August 12 story in which a member of Conference staff was interviewed for an opinion of a candidate for vice president of the United States. CNS clarified that the quotes were offered in a personal capacity rather than as a representative of the United States Conference of Catholic Bishops.

At no point are Conference staff authorized to speak on behalf of the bishops in support of, or in opposition to, candidates for elected office. Because the comments in question may have led to confusion among the faithful, let me be clear. As Catholics, we are each called to evaluate candidates for public office by how closely their policies align with Gospel principles, as expressed by the U.S. bishops in Forming Consciences for Faithful Citizenship.

So far, the USCCB has taken no action against Grimes, which contrasts with its treatment of the bishops’ former spokeswoman, Judy Keane, who was forced to leave the bishops’ conference after she posted tweets praising President Donald Trump and opposing Democrats, including then–presidential candidate Kamala Harris.

Keane, according to The Washington Times, had posted the tweets and likes on her personal account, which identified her as “dir public affairs, US Conference of Catholic Bishops. Opinions expressed are my own.”

Despite the clear disclaimer, Keane was dismissed from her USCCB position.  Some are wondering if Keane and Grimes — who clearly have opposing political affiliations — will be treated according to different standards.

“The USCCB should be inundated with letters and calls demanding that Donna Toliver Grimes be treated like Judy Keane was when she tweeted Trump support from her personal account,” wrote a Twitter user. “Judy was placed on leave. Does the USCCB have different standards for black employees?”

The USCCB should be inundated with letters and calls demanding that Donna Toliver Grimes be treated like Judy Keane was when she tweeted Trump support from her personal account. Judy was placed on leave. Does the USCCB have different standards for black employees?