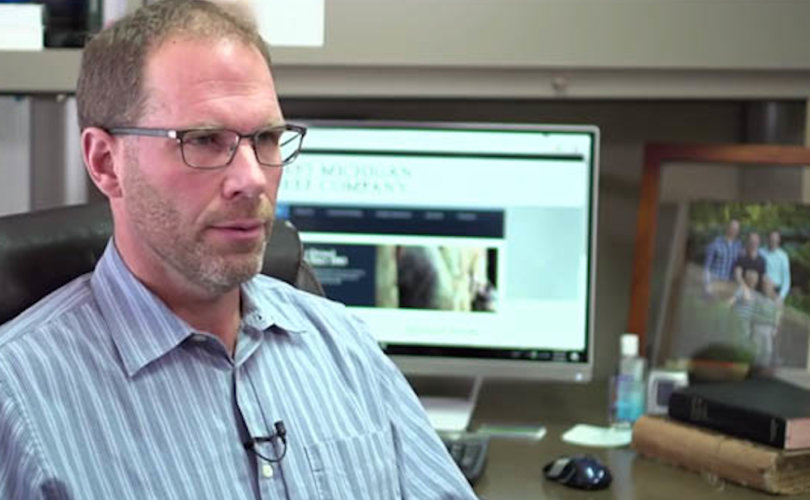 WASHINGTON, D.C., November 13, 2017 (LifeSiteNews) — The Trump administration’s Department of Agriculture dealt a blow to the previous Obama administration’s silencing of pro-marriage views in the workplace.

Last week, the USDA’s Food Safety and Inspection Service issued a strong policy emphasizing latitude for believers to express their views at work.

“Opinions about same-sex marriage, gender identity, and sexual morality are all matters of public importance,” the policy states. “USDA respects the First Amendment rights of USDA personnel, as well as non-USDA personnel working at facilities inspected by USDA, to share their varying viewpoints on these topics, whether through oral discussion, the display or distribution of literature, or other means.”

The document makes official a wide definition of sincerely held beliefs. “Under federal regulations, religious beliefs include theistic beliefs (such as those that include a belief in God) as well as non-theistic ‘moral or ethical beliefs as to what is right and wrong which are sincerely held with the strength of traditional religious views.’”

“We are pleased that the USDA is as committed to respecting the First Amendment as it is to food quality,” Travis Weber, director of the Center for Religious Liberty at the Family Research Council, wrote in a press release. “We thank President Trump who signed the executive order on religious freedom making clear that Americans, like the Vander Boons, don’t lose their religious freedoms upon entering the public square.”

“We are also grateful for Attorney General Jeff Sessions … putting federal government agencies on notice: You will not only respect the freedom of every American to believe but live according to those beliefs,” Weber added.

The free speech guidelines were made necessary because of the Obama government’s threat to run a Christian meat packer out of business over a pro-marriage pamphlet on a break-room table.

“I never would have imagined that the federal government would threaten to put me and my employees out of work because of religious literature on a break-room table,” West Michigan Beef Company owner Donald Vander Boon said. He and his wife Ellen employ 45 people at their facility.

It all stems from a July 2015 Obama administration “anti-harassment” policy restricting workplace speech that could be construed as offensive. Issued just four days after the U.S. Supreme Court ruled homosexual “marriage” constitutional, its wording expressed “zero tolerance” for any “harassment” on the basis of “sexual orientation” or “marital status” or “gender identity” by employers or employees.

The Obama policy used vague “No Nos” that could be interpreted to apply widely, such as “disrespectful comments,” “negative stereotyping,” and “insult(ing) an individual or protected group.”

Subsequently, a USDA official inspecting the Grand Rapids’ West Michigan Beef Company noticed a Christian article on the break-room table that defended the Biblical belief that marriage is the union of one man and one woman. Following the Obama anti-harassment policy, the government inspector confiscated the article and threatened to shut down the privately-owned meat packer by removing all inspectors from the business if any such literature is allowed in the workplace.

President Trump has steadily turned the tide toward liberty.

Upholding free speech and free religious exercise “is not optional, and it is not discretionary,” Perdue wrote. “It is one of the crucial reasons why we exist.”

“The First Amendment’s Free Exercise Clause prohibits federal employees from unduly burdening citizens’ free exercise of religion,”Almanza instructed all food inspectors. “Employees are permitted to engage in religious expression directed at fellow employees and may attempt to persuade other employees of the correctness of their views.”

Significantly, Almanza explained, “Proselytizing is as entitled to constitutional protection as any other form of free speech.”

“While supervisors may not impose unfair work conditions on employees who do not share their religious beliefs, their personal views concerning religious are still protected by the First Amendment,” Almanza wrote. “As a result, supervisors may also express their sincere religious views without fear of sanctions.”

“I commend Secretary Perdue for correcting an injustice committed under the Obama administration against this family-owned meat packing business,” Weber concluded.

Vander Boon is grateful for the government’s about-face to support his freedoms. “My family and I seek to share God’s love and truth with others, and we’re thankful that the USDA is now recognizing our right and the right of other Americans to speak freely without facing government persecution,” the beleaguered business owner said.

In October, Sessions issued government-wide protections of religious liberty. “Americans do not give up their freedom of religion by participating in the marketplace, partaking of the public square, or interacting with government,” he said.