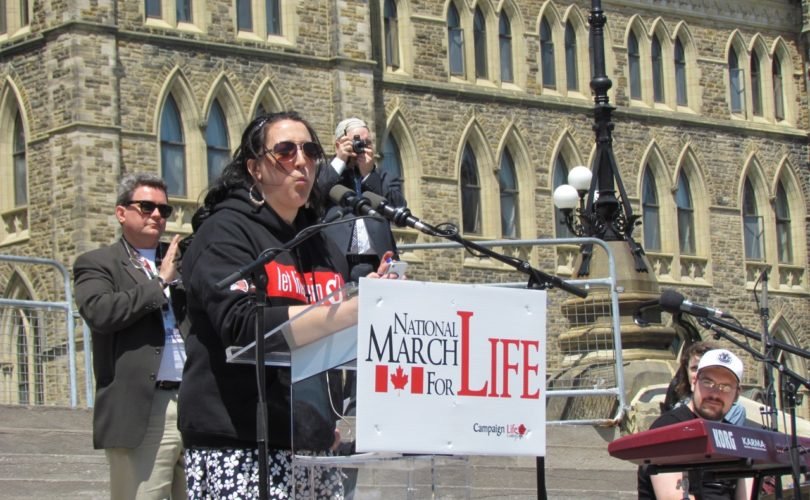 Campaign Life Coalition's Alissa Golob speaks on Parliament Hill at the National March for Life on May 15, 2015.Patrick Craine / LifeSiteNews

OTTAWA, May 21, 2015 (LifeSiteNews.com) – Social media is a good place to start getting active in pro-life causes but a poor place to stop, teenage students from around Ontario heard at a Campaign Life Coalition youth conference in Ottawa on Friday.

Presenters Alissa Golob and Carter Grant made this point at a workshop aptly named “More than a hashtag.” But first they acknowledged that social media could do amazing things. They noted how Facebook and Twitter spread the “ice bucket challenge” to raise $15 million for the ALS Society, much of that “from people who didn’t know what Amyotrophic Lateral Sclerosis even was.”

Golob recounted how Campaign Life Coalition used YouTube to generate supportive videos for then-Status of Women Minister Rona Ambrose when she came under attack from feminists for voting for a pro-life motion in the House of Commons.

But social media was only a place to start. “Don’t become a slacktivist,” they said, inventing the term for pro-lifers no more active than using their index fingers and the Internet. They urged their listeners to start pro-life clubs, and described how one high school club had reached out to one young woman on her way to an abortion facility. Then the woman’s own testimony was shown: “I was a few minutes away from having an abortion,” she said, cradling a baby. “On December 9th my daughter was born.”

If such clubs do no more than deliver to students one piece of information, that a baby’s heart starts beating at three weeks’ gestation, they save lives, said the presenters. Other club activities the presenters suggested were baking and selling “Cupcakes for Life,” and holding Silent Days for Solidarity, in which participants tape their mouths shut and cut off their cell phones and phones in silent support for the voiceless unborn.

Presenter Carter David recounted how his efforts to start a club at Ryerson University in Toronto have so far run up against a hostile student council and unsupportive university administration. Without giving up, the pro-life students were holding activities without club status, while garnering themselves much support from fellow students and student newspapers for standing up for their rights.

Golob urged students to get into politics. Though they couldn’t vote till 18, they could join political parties at 14. A pro-lifer had just been elected leader of the provincial Progressive Conservative party, she said, referring to Patrick Brown. “This means we could have a pro-life premier.”

“Everyone in this room could have been involved in getting Patrick Brown elected leader,” she said, adding that politicians and organizers were eager for the help of young campaign workers.