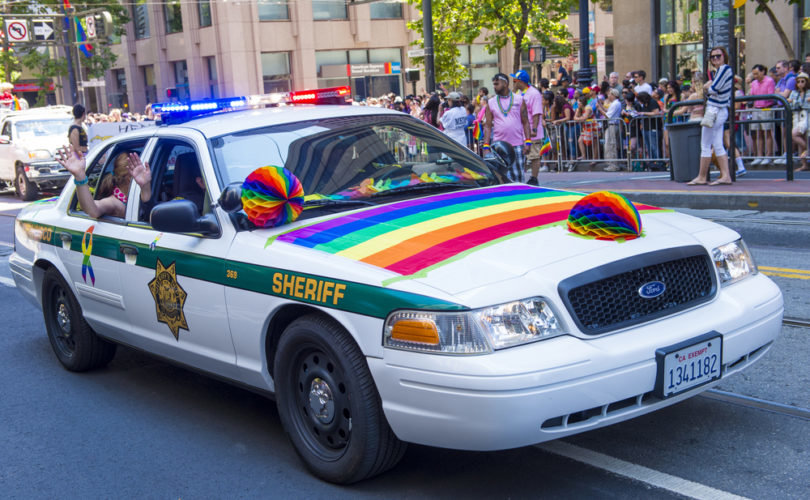 While the department claims the officer refused to work the parade, his attorney says he was asked to join a choreographed motorcycle formation and simply requested a lower profile job.

SALT LAKE CITY, Utah – A police officer in Salt Lake City has been placed on administrative leave and is facing an internal affairs investigation after his superiors alleged he refused to direct traffic or provide security at Sunday’s Utah Pride Festival, a pro-homosexual event known for indecent displays of public semi-nudity and sexually explicit behavior.

The officer’s attorney, however, claims the officer was told to join a choreographed motorcycle formation at the beginning of the parade and had simply requested a “less conspicuous” job, such as traffic enforcement or security.

The officer, who has not been named by the Salt Lake City Police Department, objected to the assignment based on his personal beliefs.  A spokesperson for the police department told local news station Fox 13 that that was unacceptable.

“The vast majority of officers understand: When they put their badge on and come to work, they leave their personal beliefs at home, and we provide service to the community,” said spokeswoman Lara Jones.

“We don’t tolerate bias and bigotry in the department,” Jones told another local outlet, KSL.com, “and assignments are assignments.  To allow personal opinion to enter into whether an officer will take a post is not something that can be tolerated in a police department.”

However, local attorney Bret Rawson, a former candidate for Utah attorney general, is disputing the police department’s account of the events that led to his client’s suspension.

“The officer simply felt that the level of participation required in the event could be perceived as endorsing or advocating in favor of the LGBTQ community, a position which made him uncomfortable, given his personal and religious beliefs,” Rawson told the Salt Lake Tribune on Monday.

“He never refused to do his job,” Rawson said. “He specified that if he was required to do [the motorcycle assignment], he would do that. So he was very surprised that he was put on administrative leave.”

Rawson said that the officer felt his constitutional rights had been violated by the suspension.

“[My client] feels that the same protections that afford individuals to participate in a parade like we had yesterday, are the very constitutional protections that were not afforded to him,” he explained.

The media frenzy surrounding the officer’s suspension and the public accusations of bigotry by his superiors amounted to a “constructive termination” or firing for his religious beliefs, said the attorney. “No reasonable, rational person could stay at work under these circumstances.”

LifeSiteNews reached out to Rawson by phone and e-mail to ask what his client’s next steps will be, but the messages were not returned by press time.  However, police department spokeswoman Jones told the Salt Lake Tribune that the department had “received notice of pending litigation.”