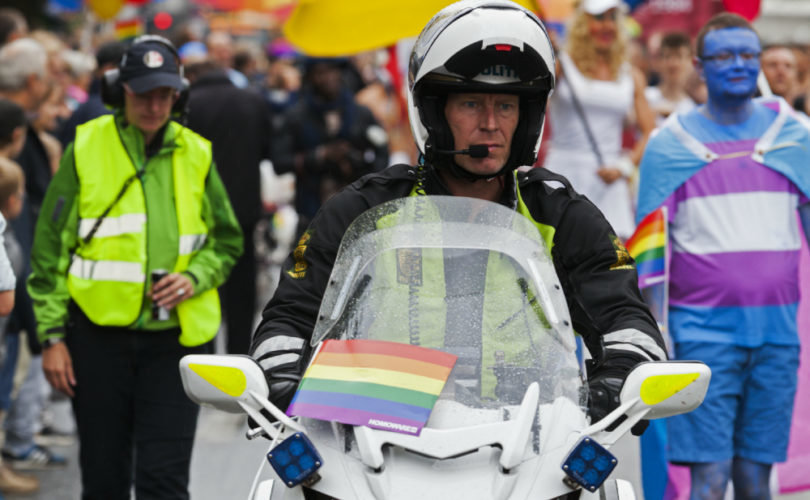 SALT LAKE CITY, UT, February 26, 2015 (LifeSiteNews.com) – Last year, Salt Lake City police officer Eric Moutsos left his job after he was suspended for refusing to ride in the motorcycle brigade at the head of the city’s gay pride parade.  Now, after months of silence, Moutsos is speaking out, telling the Associated Press in an interview that his superiors violated his constitutional right to religious freedom when they tried to force him to take a public role in the event.

Moutsos, 33, was placed on administrative leave for “discrimination” after he objected to his assignment at the front of the gay pride parade and asked to be placed in a less visible role.

Moutsos told the AP that he had no problem working the event in another capacity but felt that participating in the high profile motorcycle formation with its “celebratory circles” would amount to tacit endorsement of a lifestyle his Mormon religion teaches is sinful.

“It is unquestionably my duty as a police officer to protect everyone’s right to hold a parade or other event, but is it also my duty to celebrate everyone’s parade?” Moutsos wrote in a six-page statement released in advance of his first public interview.

Salt Lake Police Chief Chris Burbank defended his decision to suspend Moutsos, telling the AP that Moutsos’ refusal to publicly support the parade was a sign of “hatred” toward homosexuals, and that he could no longer be trusted to protect their safety.

“It has nothing to do with religious freedom, that has to do with the hatred of those individuals and what the parade stands for, which is about unity and coming together,” Burbanks told the AP. “How can I then send that officer out to a family fight that involves a gay couple or a lesbian walking down the street?”

Moutsos denied any hatred of homosexuals, and said his concern about their lifestyle was based in love.

“We can 100-percent disagree and still 100-percent love,” Moutsos said. “I hate that we’re labeled in this way that is so divisive.”

“I used to be quite the hellion back in my day, and I found what I believe is God kind of later in my life,” Moutsos added.  “Now, I have such a strong, deep faith in Him . . . He and I love people, but I do not advocate certain things in people’s lives. In this parade, there were messages that I don’t advocate.”

Moutsos told the AP that although he has now found employment with another law enforcement agency, the six months since his suspension and subsequent departure from the SLC PD have been “difficult and depressing” for himself, his wife and their four children.  But he chose to come forward and speak publicly about the incident anyway after being inspired by Mormon leaders who have called for new anti-discrimination laws that protect homosexuals from unfair treatment while also preserving the rights of those who object to homosexual behavior on religious grounds.

Meanwhile, Moutsos’ attorney Bret Rawson told the AP that his client is still considering whether to pursue a religious discrimination case against the SLC PD.