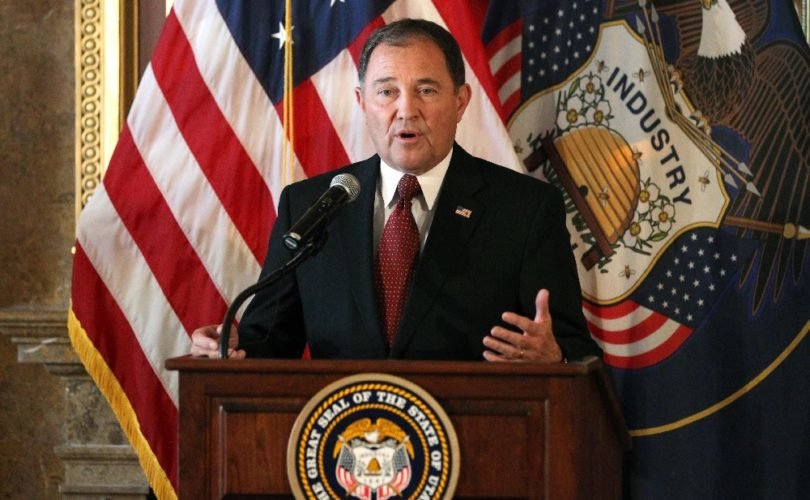 SALT LAKE CITY, March 27, 2019 (LifeSiteNews) – The cutoff for legal abortions was moved four weeks earlier in Utah this week, thanks to a bill signed Monday by Republican Gov. Gary Herbert banning the procedure past 18 weeks of pregnancy.

HB 136 forbids most abortions past 18 weeks, around which time medical evidence suggests that preborn babies are capable of feeling pain. Violations of the law’s provisions can range from misdemeanors to second-degree felonies, as well as risk sanctions by the state Physicians Licensing Board.

The ban does not apply in cases of rape, incest, a threat to the woman’s life, a “serious risk of substantial and irreversible impairment of a major bodily function,” lethal fetal defects, or a “severe brain abnormality.” Such abnormalities don’t include Down syndrome, spina bifida, cerebral palsy, or any condition “that does not cause an individual to live in a mentally vegetative state.”

Herbert signed the bill into law Monday, The Deseret News reported, replacing the state’s previous 22-week cutoff point. He didn’t comment on the action, but has previously described himself as a “pro-life guy” and suggested that post-Roe medical advancements warrant reconsidering the boundaries of current abortion laws.

“This is the biggest pro-life legislation that Utah has had in decades,” Pro-Life Utah responded to the news. “Utah is now a safer place for unborn children and their mothers. Thank you to everyone who helped support this bill and get it passed. You are literally saving lives!”

“This ban adds to the long list of restrictive abortion policies that legislators have already enacted in this state,” Planned Parenthood and the ACLU of Utah complained in a joint statement. “For example, Utah already forces people seeking abortion to complete a state-mandated online education module and a face-to-face informed consent session designed to discourage people from seeking abortion services, and then wait 72 hours before receiving abortion care.”

HB 136 is planning to take effect in May, but a lawsuit by groups such as the ACLU on behalf of abortion centers is likely to be filed and delay its implementation. Herbert has previously dismissed concerns over a legal battle’s price tag, Fox 31 reported.

The U.S. Supreme Court has not ruled specifically on 20-week bans, and in 2014 refused to consider the constitutionality of Arizona’s 20-week ban. But even within Roe v. Wade’s questionable parameters, the justices may be open to an earlier cutoff point for legal abortion. Lawyers with the Life Legal Defense Foundation noted that the Court has also acknowledged a “compelling interest in protecting the unborn child” as pregnancy progresses, particularly on criteria like fetal pain.

Pro-abortion Justice John Paul Stevens admitted in 2000’s Stenberg v. Carhart that partial-birth abortion and dismemberment abortions (which are used before 20 weeks) are “equally gruesome,” and it was “simply irrational” to conclude that one was “more akin to infanticide than the other.” Stenberg struck down the federal partial-birth abortion ban, but Gonzales v. Carhart upheld it in 2007.

HB 136 is the second pro-life law Herbert has signed in as many weeks. Last Friday, he signed a ban on abortions sought specifically due to a prenatal diagnosis of Down syndrome, which will not take effect until a “court of binding authority holds that a state may prohibit the abortion of an unborn child” sought for Down syndrome.