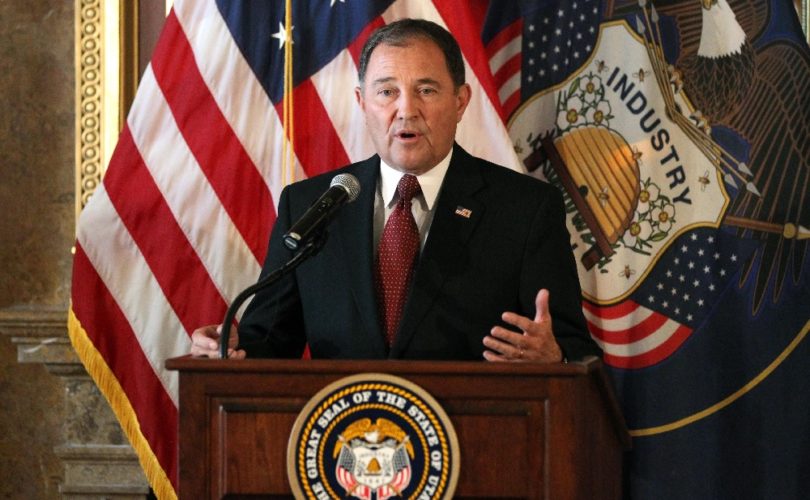 SALT LAKE CITY, March 30, 2020 (LifeSiteNews) — Utah’s Republican governor, Gary Herbert, has signed a ban on most abortions, which will be automatically “triggered” once Roe v. Wade is overturned or otherwise negated, as well as a law to ensure that the remains of babies killed in abortions be treated humanely.

Senate Bill 174 would ban abortion except in cases of rape, incest, severe birth defects, and threat of “substantial impairment” to the mother’s health. It will not take effect unless and until it’s certified that its provisions have been legally cleared to take effect, meaning not until the U.S. Supreme Court overturns Roe or the 1973 ruling is superseded by a constitutional amendment.

Senate Bill 67 requires that aborted babies be either buried or cremated by the facilities that aborted them. It is meant to prevent the bodies of aborted children from being treated like medical waste, both out of respect for their dignity and to underscore their humanity.

Because they don’t take effect until after Roe falls, “trigger laws” like S.B. 174 are not subject to the usual lawsuits facing pro-life legislation and are unlikely to impact future abortion deliberations at the Supreme Court. Supporters say they are important because they prepare state law to ban abortion as soon as a favorable nationwide ruling occurs, which they hope President Donald Trump’s judicial nominees will deliver in the near future.

Fetal remains treatment laws, meanwhile, have been motivated across the country by horror stories about abortion facilities destroying the babies they kill with methods such as “big ovens” and abortionists stockpiling corpses on their own property.

A third pro-life bill, which would have required abortionists to offer women the opportunity to see ultrasound images of their babies, passed the state Senate but died in the House. In the Senate, six female lawmakers (two of whom were Republicans) walked out in protest of the ultrasound bill.