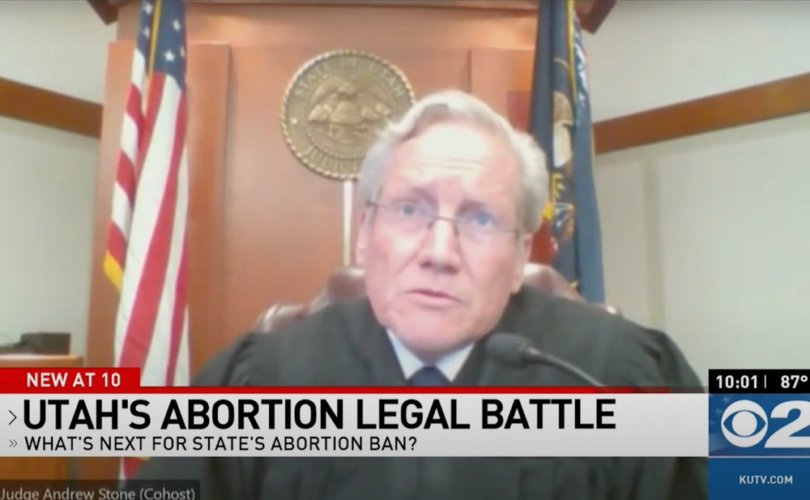 (LifeSiteNews) – A Utah judge has temporarily blocked Utah’s pro-life trigger law for two weeks, pending another hearing to determine whether the restraining order should stand.

The injunction came in an emergency hearing Monday in response to a request from the Planned Parenthood Association of Utah and the American Civil Liberties Union of Utah’s request for a temporary hold on Utah’s “trigger” abortion ban passed in 2020. Utah’s ban would outlaw abortion at all stages of pregnancy in most cases.

3rd District Court Judge Andrew Stone defended his ruling by arguing that “The immediate effects that will occur outweigh any policy interest of the state in stopping abortions immediately,” adding that “Doctors here are threatened with felonies.”

Planned Parenthood resumed abortions on Monday due to Stone’s order.

However, another law banning abortion at 18 weeks is now in effect in Utah after a federal judge dismissed an injunction placed on it in 2019, the Salt Lake Tribune reported.

Fox 13 reported that Stone has “scheduled another hearing” on July 11 “to determine whether or not the injunction should stand,” and he has “pointed out the case could go all the way to the Utah Supreme Court.”

Utah’s attorney in the matter, Tyler Green, has argued that Utah has an interest in protecting the lives of “unborn citizens,” and that the Utah State Constitution has no right to an abortion.

Commenting on the restraining order, the trigger law’s sponsor, Sen. Dan McCay, R-Riverton said in a statement, “Statistically 8.2 babies are aborted every day in Utah. Sadly, Judge Stone sentenced 115 babies to death. It’s disappointing that a law meant to protect the most vulnerable, the unborn, is delayed by one judge with no support in the law.”

“I’m confident that Utah’s abortion ban will be upheld, and we can work to support life,” he added.