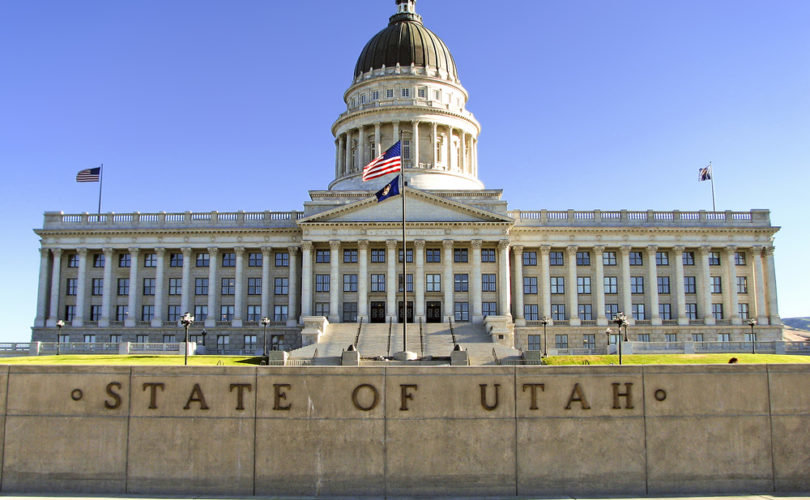 Utah's State Capitol Building in Salt Lake City houses the chambers of the Utah State Legislature, and the offices of the Governor and Lieutenant Governor.Shutterstock.com

DENVER, CO – A panel of three judges on a U.S. appeals court issued a split decision Wednesday striking down Utah's marriage protection amendment as a violation of the U.S. Constitution.

A three-judge panel of the Denver-based Tenth Circuit Court of Appeals voted 2-1 against Utah in Kitchen v. Herbert. “The Fourteenth Amendment protects the fundamental right to marry, establish a family, raise children, and enjoy the full protection of a state’s marital laws,” the ruling stated.

“The Fourteenth Amendment protects the fundamental right to marry, establish a family, raise children, and enjoy the full protection of a state’s marital laws.”

The ruling was greeted with elation by homosexual pressure organizations. Evan Wolfson, president of Freedom to Marry, a group that favors redefining marriage, told the Associated Press, “What is so powerful here is that we have the first federal appellate court and … it's a case coming out of Utah affirming in the strongest, clearest, boldest terms that the Constitution guarantees the freedom to marry and equal protection for all Americans and all means all, including gay couples.” The AP said Wolfson felt the victory was sweetened by the fact that Utah is so intensely conservative and religious.

Human Rights Campaign President Chad Griffin said, “Our Constitution does not allow for such blatant discrimination.”

The court's dissenting vote, Justice Paul J. Kelly Jr., warned in his ruling that judges around the nation were overstepping their role as interpreters of the Constitution to impose their own views as law.

“We should resist the temptation to become philosopher-kings, imposing our views under the guise of the Fourteenth Amendment,” Justice Kelly wrote.

The decision came the same day a Clinton-appointed U.S. district judge struck down Indiana's marriage law. Grassroots forces have begun to push back in both states.

“It’s disappointing to have a few federal judges decide that they can unilaterally override the decision of Utah voters to preserve marriage as society’s way of preserving children’s opportunity to be reared by a mother and father,” said the Sutherland Institute, a Utah-based conservative think tank. “Utah voters deserve self-determination to decide a matter crucial to the state and its citizens.

In 2004, 66 percent of state voters approved Amendment 3 to preserve the definition of marriage.

U.S. District Judge Robert J. Shelby, who was appointed by Barack Obama in 2012, struck down the state's constitutional marriage protection amendment on December 20. Homosexual marriage “is deeply rooted in the nation’s history and implicit in the concept of ordered liberty,” Shelby wrote in his 53-page decision. Therefore, laws restricting marriage to heterosexuals “demean the dignity of these same-sex couples for no rational reason,” and “these laws are unconstitutional.”

The decision came as a surprise, as Judge Shelby had indicated he would not decide the case until January 7. But Utah Gov. Gary Herbert quickly sprang into action, working with then-Acting Attorney General Brian L. Tarbet “to determine the best course to defend traditional marriage within the borders of Utah” and appointing Sean Reyes as permanent state Attorney General. “Utahns deserve a fair and complete judicial process,” Herbert said.

The Tenth Circuit Court of Appeals denied the state's request for a stay.

The U.S. Supreme Court unanimously granted Utah's request for a stay on January 6, 2014.

Governor Herbert said that until the Supreme Court rules, the state will not recognize the approximately 1,300 homosexual “marriages” that took place within the state's borders. “With the district court injunction now stayed, the original laws governing marriage in Utah return to effect pending final resolution by the courts,” his order said.

U.S. Attorney General Eric Holder announced in January that the Obama administration would recognize all same-sex “marriages” contracted during the narrow window of time when the practice had been legalized by judicial fiat.

He added the Obama administration had been “working tirelessly to implement it in both letter and spirit.”

The Sutherland Institute said it is looking forward to a “main event” before the U.S. Supreme Court and “has laid the groundwork, ensuring that top legal minds have compiled every constructive and effective argument to give our side the best chance of winning.”