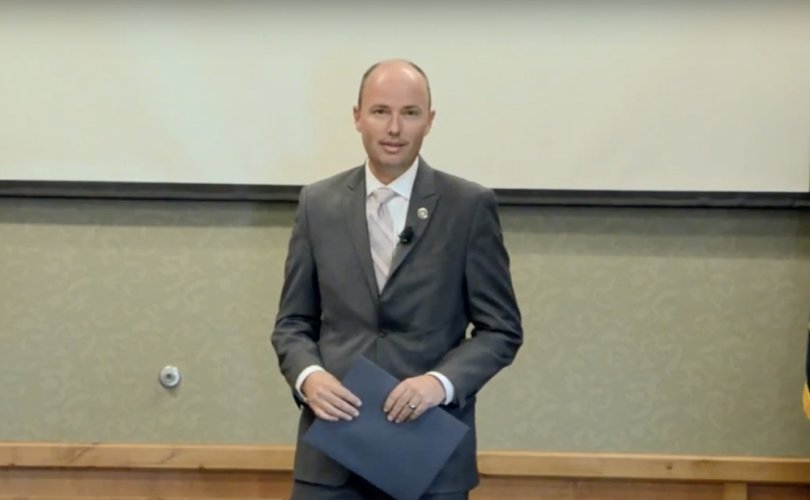 SALT LAKE CITY (LifeSiteNews) – In an apparent effort to appeal to politically-correct young people, Utah Republican Gov. Spencer Cox shared his “preferred pronouns” during a 2021 student town hall, video from which has only now gained notice.

In a clip circulated this week from the Zoom call for the April 13, 2021 virtual #OneUtah Student Town Hall, Cox can be seen declaring that “my preferred pronouns are he, him, and his,” and thanking a student “for sharing yours with me.” He also echoes the rhetoric of LGBT activists by stating that “leading with equity and inclusion starts at a young age, and the students that are joining us today have shown great leadership through their academic achievement and civic participation in our state.”

Prominently displaying or announcing one’s “preferred gender pronouns” is a popular piece of etiquette in LGBT activist circles and among Democrat politicians (including Vice President Kamala Harris), but tends not to be indulged by GOP officeholders. Accordingly, Breitbart reported that Cox’s move has not been favorably received among Utah Republicans.

Jorgensen added that Cox’s broader pattern of LGBT advocacy, which includes trying unsuccessfully this month to veto a law protecting women’s sports, goes “absolutely against everything we believe in … The social issues are the ones that have these people fired up, and he just continues to double down on them.”

Breitbart noted that Cox is also the first Utah governor to recognize “LGBTQ+ Pride Month,” and has said elsewhere that he considers his pro-LGBT stance “critical to the survival of the [Republican] party” because of its appeal to young people.

Jorgensen warns that Cox’s pandering on the issue is particularly concerning to Utah conservatives given that the governor also wants more influence over state education.

“This is why people are upset,” he explained. “The school board races here in Utah are pretty heated because we want to have control, and the populous wants to have control over what goes into our curriculum and what our children are learning in school. And when we start hearing the governor, you know, using the democratic [buzz words] and using preferred pronouns to speak to little kids … [it] has a lot of people on edge.”