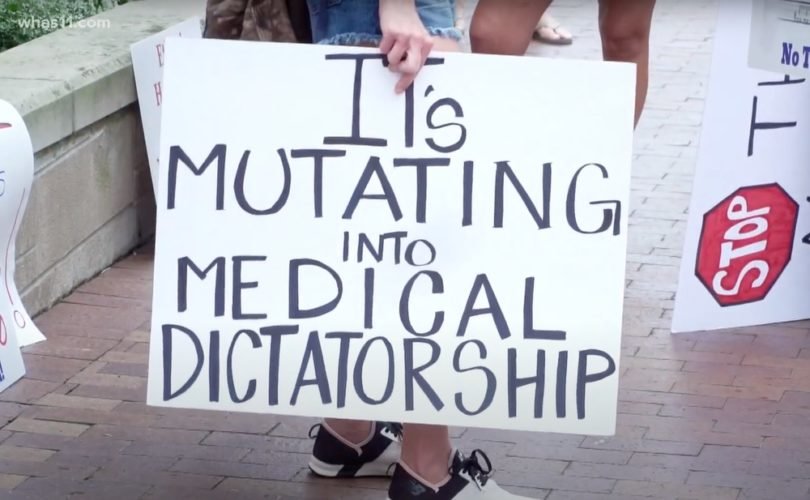 CHARLOTTESVILLE, Virginia (LifeSiteNews) —  The University of Virginia (UVA) has dropped 238 students for failing to get the COVID-19 jab.

According to a report by The Virginian-Pilot, the students had been given until Wednesday of last week to get the shot or obtain an approved exemption.

Brian Coy, a spokesman for the University of Virginia, told the Virginia newspaper in an email that the students were dropped after “receiving multiple reminders via email, text, phone calls, calls to parents that they were out of compliance.”

According to Coy, only 49 students were registered for the fall 2021 semester, suggesting that many of the disenrolled students “may not have been planning to return to the University this fall at all.”

UVA’s COVID-19 vaccination policy for students states that “[a]ll students who live, learn, or work in person at the University of Virginia during the 2021-2022 academic year must be fully vaccinated.”

Those who failed to comply with mandatory vaccination and who did not get an approved exemption over the summer were forbidden to set foot on the campus as of July 1.

The 238 students disenrolled by the university will be permitted to enroll again if they get vaccinated or file an exemption by August 25, the Pilot reported.

Acceptable exemptions sought by students may be medical or religious. Those who obtain an approved exemption are subject to continuous screenings and “other public health measures.”

While the university permits religious exemptions based upon a student’s “sincerely-held religious beliefs” which “preclude vaccination,” students will not be granted a religious exemption if theirs is a “philosophical, moral, or conscientious objection.”

Such language may present a difficulty for many whose churches permit the shots but who personally oppose the abortion-tainted drugs for a range of moral and ethical reasons including their connection with abortion and the hasty manner in which they were produced, leaving long-term health risks a mystery.

For example, Catholic students would likely face difficulty obtaining a “religious exemption,” since guidance from the Vatican suggests the shots are morally permissible. According to a document put out by the Congregation for the Doctrine of the Faith, “[t]he moral duty to avoid such passive material cooperation is not obligatory if there is a grave danger.”

However, the Vatican guidance explicitly states that “practical reason makes evident that vaccination is not, as a rule, a moral obligation and that, therefore, it must be voluntary.”

“It must be their free, personal choice,” Strickland wrote. “God gave us free will, let us use it. No mandates.”

However the policy of the University of Virginia neither permits personal opposition to the jabs if it is not explicitly religious belief, nor grants students the personal freedom to opt in or out.

Students fortunate enough to obtain an exemption must comply with a long list of restrictions and requirements regarding isolation, contact tracing, and potential removal from their classes.

According to the religious and medical exemption forms provided on the university’s website, students with approved exemptions must sign a declaration stating they “will comply with testing as directed by the University,” including “mandatory testing prior to the start of each semester and weekly prevalence testing throughout the academic year.”

Vaccine-exempt students who live on campus must also agree to “submit to self-isolation or quarantine in a designated University facility” if they test positive for COVID-19, experience symptoms, or have been exposed to someone with the virus.

Other requirements include cooperating with contact tracing efforts and affirming that “[i]n the event of an outbreak or a threatened outbreak of COVID-19, I will comply with any University directive that may bar me from living, learning, and/or participating in University-approved activities on-Grounds temporarily or permanently.”

UVA students, staff, and faculties are required to wear masks on UVA grounds even if they are “fully vaccinated.”

Other universities have gotten creative with their efforts to urge students to get the jab.

Quinnipiac University in Connecticut made headlines last week when it announced it would cut internet access for students who failed to comply with the university’s vaccine mandate.

According to the university’s student newspaper, “students will lose access to Wi-Fi and the campus network if they fail to complete the vaccination mandate by Sept. 14.”

The increasing pressure on students and others to getting the COVID-19 shot has been joined by the Food and Drug Administration’s grant of full approval to the Pfizer COVID-19 shot, which many anticipate will pave the way for more sweeping mandates in the coming weeks.

The students had submitted an emergency request asking for an injunction against the university’s vaccine mandate. The request was denied by Justice Amy Coney Barrett, the Trump-appointee who replaced pro-abortion judge Ruth Bader Ginsburg on the U.S. Supreme Court

Previously the Indiana University students had argued that the university’s mandate violates the right of students to refuse medical treatment, and said that the policy breaches an Indiana law forbidding COVID-19 vaccine passports. U.S. District Judge Damon R. Leichty, a Trump appointee, disagreed, stating that the requirement was in the “legitimate interest of public health.”

Barrett’s decision suggests that additional lawsuits against university vaccine mandates may not be successful.