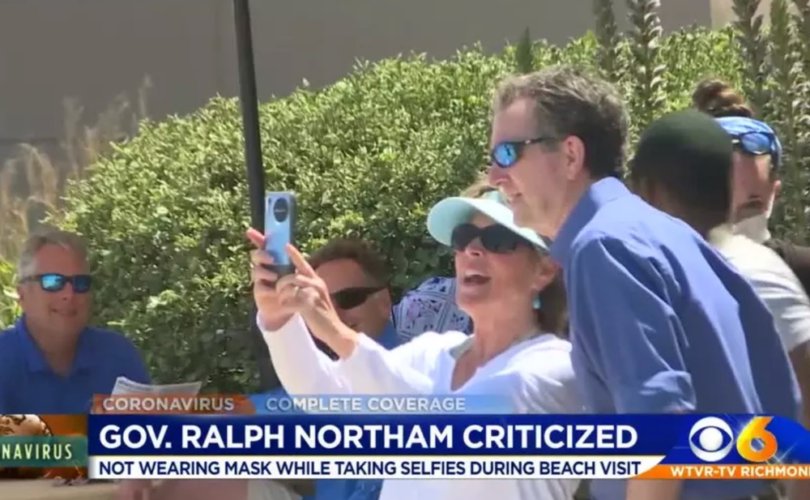 Virginia Gov. Ralph Northam sans mask stands right next to a woman as they snap a selfie over Memorial Day weekendscreenshot

This Memorial Day weekend, Virginia Governor Ralph Northam – who, as the commonwealth begins easing its lockdown, is rumored to be contemplating ordering all residents to wear masks – was photographed at a newly reopened beach not wearing a mask and standing close to beachgoers to take selfies with them. Northam’s governorship has been marred by his apparent endorsement of infanticide in January 2019 and the revelation that he is pictured in his medical school yearbook either wearing a Ku Klux Klan hood or blackface.

Should he mandate masks in certain settings, the mandate would have to be instituted as an exception to a Virginia law making covering one’s face in public a felony. The law, which has exceptions for events like Halloween, theatrical performances, and a “public health emergency,” was apparently “created…in response to the KKK presence in Virginia,” according to a Virginia Beach attorney.

May 26, 2020, 3:36 p.m. EST: Northam announced this afternoon that beginning Friday, face coverings will be required inside buildings, with some exceptions.

The pastor of a Chicago church said multiple police cars and a government representative showed up at his church on Sunday demanding services end.

Pastor Courtney Lewis of Cornerstone Baptist Church told Todd Starnes on his eponymous radio show that he was in the middle of church services when someone began to bang loudly on the front doors. Outside, he said, were three police cars, two unmarked cars, and a representative from Chicago Mayor Lori Lightfoot’s office. Lewis told Starnes it was “like the Soviet-style KGB.”

And according to the Washington Post, “A third of Americans are showing signs of clinical anxiety or depression, Census Bureau data shows, the most definitive and alarming sign yet of the psychological toll exacted by the coronavirus pandemic” (emphasis added).

Officials from China’s province of Guangdong said on Monday they are planning to build dozens of high-level biosafety laboratories that should be able to safely handle infectious diseases, including at least one capable of handling Ebola…

Shi Zhengli, deputy director of the Wuhan Institute of Virology and a researcher known as the “Bat Woman” for her focus on coronaviruses in bats, warned in an interview with Chinese state television on Monday that “the viruses we have discovered are just the tip of the iceberg” and more pandemics are probably on the way.

May 26, 2020, 7:09 p.m. EST: According to the Daily Beast, “So many people working from home with the AC on could strain grids coast to coast…Hot weather blackouts have long plagued neighborhoods and towns from New York to California to Texas. But now experts are warning that millions of Americans who are working from home or are unemployed—cranking their air conditioners as the temperature rises on sunny days—will only strain transmission lines and transformers further.”

May 26, 2020, 4:55 p.m. EST: The Catholic bishops of Washington state responded to President Trump calling on state governors to allow churches to reopen with a letter saying in part:

We want to let you know that the public celebration of Mass was suspended, not out of fear, but out of our deepest respect for human life and health. As disciples of Jesus, we are called to be instruments of God’s protection for the vulnerable and the public common good. Our love of God and neighbor is always personal and not partisan. While we share the desire to bring people back to Mass as quickly as possible, we will wait to schedule our public worship when it is safe and we are prepared to do so.

May 26, 2020 (LifeSiteNews) – Last week, The Federalist published an interview with an addiction expert who says there is a “pandemic within a pandemic.” He said drug addicts are relapsing and overdosing because of conditions caused by the coronavirus lockdowns.

The doctor in charge of a California trauma center offered a similarly grim observation: “we’ve seen a year’s worth of suicide attempts in the last four weeks.”

In a May 6 article that remains relevant, pro-life bioethicist Wesley J. Smith of the Discovery Institute explored the “dangerous temptation to remove control over policy from democratic deliberation in favor of a technocracy, i.e., rule by ‘experts.’ In health care, such a system would be particularly perilous since the experts placed in charge of policy would be ‘bioethicists’ whose predominant views disparage the sanctity of human life.”

The most influential of our would-be health-care overlords hold immoral and amoral values not shared by most of those who would be impacted by their policy prescriptions. For example, most mainstream [bioethics] practitioners reject the belief that human beings have unique value and — unless they have a modifier such as “Catholic” or “pro-life” in front of their identifier — embrace a utilitarian “quality of life” approach to medical decision-making, according to which some of us are judged to have greater worth than others based on discriminatory criteria such as cognitive capacity, state of health, and age.

The New York Post reports, “The governor of Michigan — whose strict coronavirus lockdown policies have caused infamous revolts in the state — is taking heat after her husband appeared to have flouted some of her own advice about holiday travel.”

The man whose “doomsday” predictions about the coronavirus led to the U.K.’s strict lockdown and influenced those of other countries, Neil Ferguson, resigned as a government advisor after it was revealed he broke his own rules to visit his mistress. Chicago Mayor Lori Lightfoot, after closing hair salons and declaring, “getting your roots done is not essential,” received a haircut anyway and defended doing so because “I’m the public face of this city.”