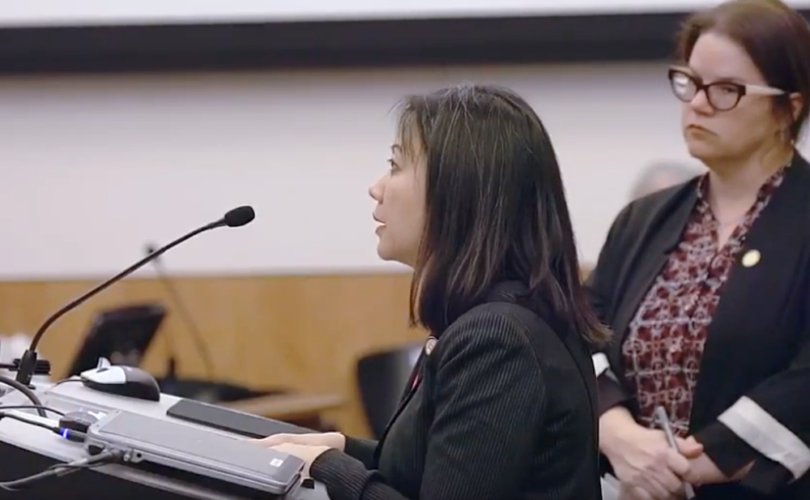 Kathy Tran (D) proposes legislation to allow abortions up until the moment of birth. Jan. 29, 2019.

VIRGINIA, January 31, 2019 (LifeSiteNews) — The state lawmaker at the center of the abortion-until-birth controversy in Virginia is defending the bill she introduced in the state legislature recently that would have allowed no limit on when unborn babies can be killed in their mother’s wombs.

In a minute and a half long video, Delegate Kathy Tran, a Democrat from Northern Virginia, downplays the tidal wave of criticism she has been receiving for her admission that her bill would allow abortions even as a mother is going into labor. Instead, Tran insists she’s only trying to “make sure that politicians don’t get between a woman and her healthcare decisions.”

Although claiming to present “the facts” about her extreme bill, Tran repeats well-known talking points long relied on by abortion activists to hide the scientific fact that abortion ends the life of a whole, distinct, living human being.

Claiming that she knows plenty of women who’ve “had to make the very personal decision” of having an abortion or not, Tran says she introduced her bill in order to “repeal the medically unnecessary and unduly burdensome barriers that Virginian women face” when obtaining abortions, which she refers to as a “healthcare service.”

Tran's pro-abortion bill also landed current Virginia Gov. Ralph Northam in hot water earlier this week when he was asked about it on a Virginia radio station.

In her video, Tran, sporting a pink jacket – a possible nod to abortion giant Planned Parenthood and its signature color – says she was “surprised” by the “line of questioning” she received about her bill.

During a subcommittee hearing on the bill, Tran appeared less than eager to admit to Delegate Todd Gilbert that the legislation would mean no limits as to when an abortion could take place.

One of the bill’s co-sponsors has since apologized for supporting it while pro-lifers have nearly universally denounced it as evil and supportive of infanticide.

Tran notes she and her now-failed bill have “done nothing to change” current Virginia law. She says she has only tried to “make sure that women are able to make these decisions and access these services in a timely manner.”

According to the bill’s summary, the law would:

Yesterday, President Trump told The Daily Caller that Tran’s defense of her bill during the subcommittee hearing was “terrible.” Today, he tweeted that Democrats are “becoming the Party of late term abortion.” Pro-lifers are planning to protest outside of and attend a town hall meeting Saturday featuring Delegate Tran.