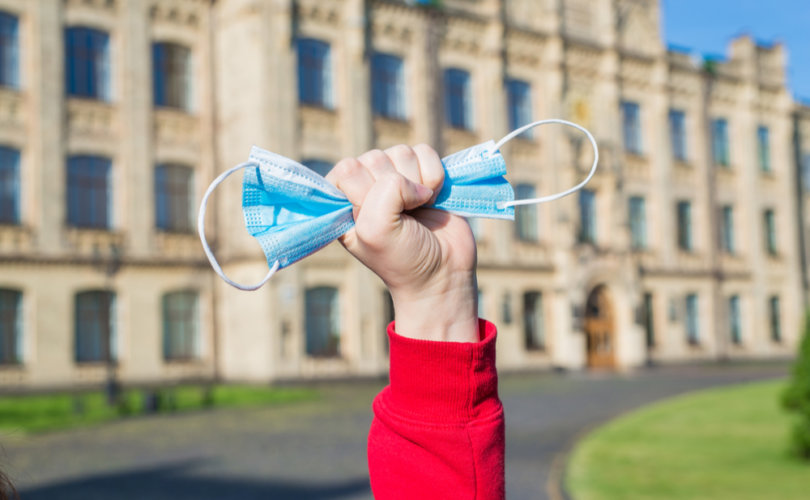 (LifeSiteNews) – Defying an executive order issued by newly-elected Gov. Glenn Youngkin that renders masks optional in public schools, several Virginia districts responded by suspending students who decline to wear a mask, segregating them into isolated rooms, and calling police on mothers who advocate for them.

After the issuing of Executive Order 2 on Youngkin’s inauguration day, January 15, Fairfax County Public Schools (FCPS) went into action by joining a seven-district lawsuit against the order and directing their administrators to suspend students without face coverings as a new provision of the dress code.

With Youngkin’s order taking effect on Monday, handfuls of students arrived for school this week seeking to exercise their parents’ right to opt them out of the district’s mask mandate.

Luke Rosiak from the Daily Wire reported the scene from one school included a teacher peering through the glass of an exterior door wearing “a dark mask and a full-face plastic shield, resemble[ing] Darth Vader.” When “seeing a masked child out front, [she] opened the door a crack to let him in.”

Carrie Lukas, a mother of two children at Forestville Elementary School, arrived with her smiling kids ready to learn, Rosiak wrote. But before she could make it to the doorway, “she was confronted by an assistant principal who said the children would not be allowed in the school,” and was then shadowed back to her car by a security guard as she “retreated.”

While Lukas said school administrators were polite, the security guard hired by the FCPS was “aggressively barking” at the small number of parents who attempted to drop their kids off for school without covered faces, reported Jordan Boyd of The Federalist.

In fact, they called the police on Rosiak because he would not fall back to a “media staging area.”

The best moment was when the school district’s security guy took off his mask to bark at some moms standing with me, admitting he couldn’t “talk through this mask.” (Duh) Really, FCPS, cops & a guy in a flack jacket to deal with a mom? @JGunlock @lukerosiak @AsraNomani @ishapiro

“If you’re just a mom who wants to express her opinion, it’s incredibly intimidating to have them calling the police. It was just totally weird and unnecessary,” Lukas said. “And I think, at least for me, it confirmed that Fairfax County [schools] … are basically making it seem as though parents, as if we were a threat.”

Stephanie Lundquist-Arora, another mother in Fairfax County, told Boyd that her three children were “suspended from learning” for a second day for violating the district’s mask requirement.

Though she said many parents are at least uncomfortable with their district’s mask policy, they go along with it to avoid retaliation.

“I’m in touch with a lot of friends who, some of them, didn’t want to defy what the superintendent was saying because they were afraid of the suspensions,” Lundquist-Arora told Boyd. “They have kids on athletic teams and stuff like that. So a lot of my friends who have problems with this are afraid to stand up because their children have a lot more to lose.”

In Loudoun County, Rosiak reported a dozen students and vocal adults gathering before their high school opened to “prepare for resistance” and the entering if the building without face coverings.

In response, administrators segregated the students and many others who were non-compliant in the school auditorium, though they were equipped with a copy of Youngkin’s order and a note from their parents opting them out from the district’s policy.

Though these students were also required to remain silent for the school day and do schoolwork online, they enjoyed great support from many parents who encouraged them, even delivering pizzas to them during their lunch hour.

At least one teacher, Karen Mineo, was also sent home “and put on leave without pay for refusing to wear a mask,” Rosiak reported.

Complaining about the treatment of these students on Tuesday, a parent, Clint Thomas, wrote Loudoun Superintendent Scott Zeigler, “We have just learned our girls and other maskless students in confinement are now being denied the ability to get water? … We’re told an admin is now guarding the door to the aux gym in case any else tries to leave. Is this now a prison or a school building?”

Last May, another study found that though mandates effectively increased the use of masks, that use did not yield the expected benefits: “mask mandates and use (were) not associated with lower SARS-CoV-2 spread among U.S. states” from March 2020 to March 2021. In fact, the researchers found the results to be a net negative, with masks increasing “dehydration … headaches and sweating and decreas[ing] cognitive precision,” and interfering with communication, as well as impairing social learning among children.

Data also shows that children are at little to no risk from the virus. Last summer, a team of researchers with Johns Hopkins School of Medicine “analyze[d] approximately 48,000 children under 18 diagnosed with Covid in health-insurance data from April to August 2020,” and found a “mortality rate of zero among children without a pre-existing medical condition such as leukemia.” The lead researcher, Dr. Marty Makary, accused the CDC of basing its advocacy of school COVID vaccination on “flimsy data.”

Opponents of Youngkin’s order argue that it is in conflict with a law passed in the state last year requiring schools to resume and maintain in-person instruction while adhering “to the maximum extent practicable,” to recommendations issued by the CDC, which still supports universal masking.

But Ilya Shapiro, vice president of the libertarian Cato Institute and a resident of northern Virginia, argues that in stating such mandates are “have proven ineffective and impractical,” the governor’s executive order determines that the CDC’s recommendations in this respect are not “practicable” for government schools, and while taking into account other aspects of state law as well, including parental rights, Youngkin renders such mandates illegal.

In addressing actual harms that are being inflicted upon children by these mask mandates, Shapiro goes on to state how the governor’s order promised “welcome relief to parents who are hardly unreasonable for being worried about cognitive development, language learning, mental health and other issues that have arisen from the coronavirus pandemic. My own kindergartner son has been diagnosed with a mild articulation disorder, for which he was evaluated without lowering his mask.”