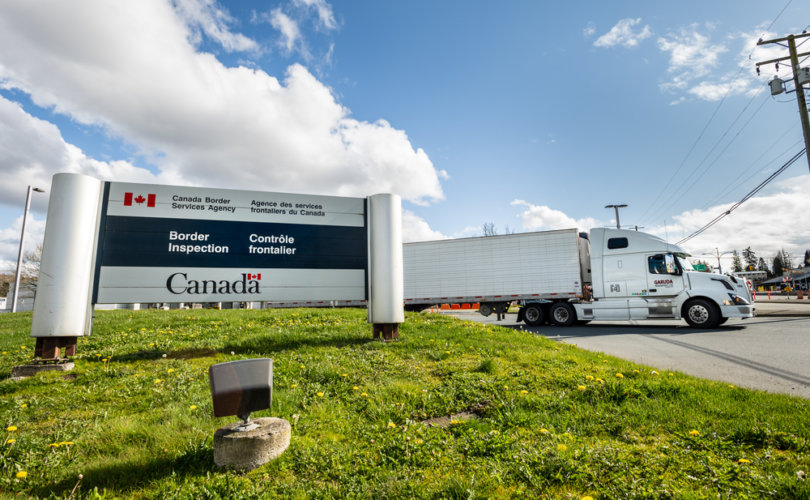 (LifeSiteNews) – Canadian trucking groups have made it clear that issues with supply chains could worsen if the Canadian and U.S. governments follow through with a proposed January 15 deadline for truckers to present vaccine passports in order to cross the border for essential business.

The Canadian Trucking Alliance (CTA) released a statement about the impending jab mandate, saying, “The government of Canada’s decision to mandate the COVID-19 vaccine for domestic federally regulated workers in the trucking industry – including many truck drivers who have been delivering products to Canadians throughout the pandemic – would put an even bigger strain on an already beleaguered supply chain.”

The CTA estimated that more than 20,000 Canadian drivers will decide to leave the Canada-U.S. trucking market if the Canadian government follows through with its planned cross-border vaccination policy.

The Canadian government has until now exempted the trucking industry from the current jab mandate on federally regulated sectors.

The CTA’s estimate of more than 20,000 truck operators leaving the profession due to the mandate is lower than a projection from the Private Motor Truck Council of Canada (PMTC), which is another trucking association that represents private fleet operators.

Based on an anonymous survey of its members, the PMTC said that more than 31,000 cross-border drivers will exit the profession. Based on hypothetical projections, the PMTC wrote that by the January 15th deadline, the number of fully vaccinated drivers could rise to 74 percent.

“If we assume these numbers are representative of the vaccination rate of the entire Canadian Cross Border Trucking community, which represents 120,000 drivers, on January 15th we will see 26%, or 31,200 drivers, exit the industry,” the PMTC said.

Including domestic drivers who do not cross the border, the amount of unvaccinated drivers is even higher, reaching around 30 percent. If federal mandates are applied to truckers, this would stop unvaccinated drivers from crossing provincial borders, which could damage the supply chain even further.

A source in the trucking industry spoke to LifeSiteNews and confirmed that truckers who have crossed the border for the past 22 months are prepared to stop driving internationally or leave the industry. With long-haul trucking licences, drivers have other professional options in operating heavy vehicles in industries that are not federally regulated. Some drivers are also considering moving into dispatch operations rather than driving trucks.

Vaccine mandates have been extended and enhanced across Canada.

The province of New Brunswick has enacted policies that allow retail business – including grocery stores – to discriminate against the unjabbed and deny them entry.

The Justice Centre for Charter Freedoms (JCCF), a constitutional watchdog, penned a letter dated December 7 that harshly criticized the decision made by the New Brunswick legislature. “It goes without saying that access to food for all Canadians including citizens of New Brunswick is an essential service which should not be denied or invited to be denied to anyone, especially by government,” the letter said.

The increasing segregation measures in the Atlantic province have inspired citizens of Moncton to respond. On Saturday, December 11, large crowds were seen loudly protesting in the streets of the largest city in the province.

Campaign Life Coalition called the measures that could see the unvaccinated barred from purchasing food “absolutely cruel and inhuman.”