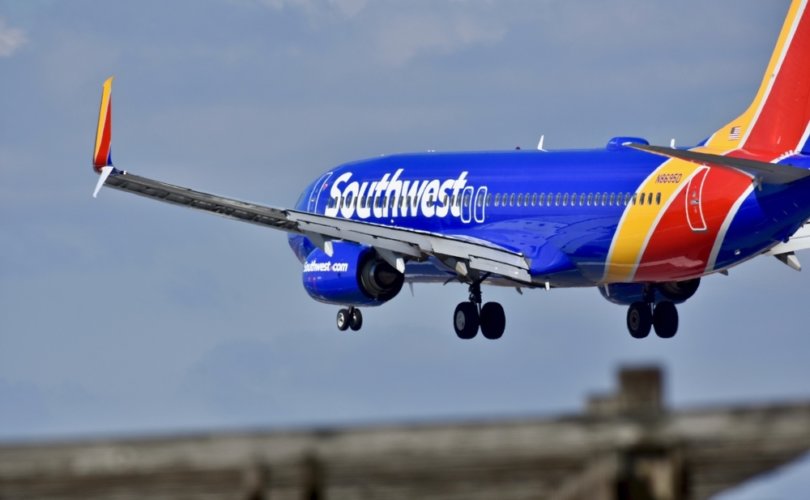 (LifeSiteNews) – Three major U.S. airlines have said that they will not make the COVID vaccine mandatory for employees, only days after a number of their competitors, including legacy carrier United Airlines, issued vaccine mandates for all their staff.

Last week, the CEOs of American, Delta, and Southwest Airlines said they would not require their unvaccinated employees to receive the COVID shots.

In a memo obtained by CNN, Southwest Airlines CEO Gary Kelly indicated that Southwest continues to encourage its workers to get vaccinated but is not planning on enforcing a mandate.

“Obviously, I am very concerned about the latest Delta variant, and the effect on the health and Safety of our Employees and our operation, but nothing has changed,” Kelly said.

Doug Parker, CEO of American Airlines told the New York Times that although the airline also encourages its passengers and staff to receive the vaccine, a mandate was not on the agenda for now.

“We certainly encourage it everywhere we can,” said Parker, “but we’re not putting mandates in place.”

Meanwhile, Delta Airlines has also announced it would not mandate vaccination, at least not until the vaccine has been fully approved by the U.S. Food and Drug Administration (FDA).

“It’s very difficult for us to come in and mandate a vaccine that isn’t even federally approved yet. The authorization hasn’t been final yet, so stay tuned,” Delta’s CEO Ed Bastian told CNBC.

In a separate interview he gave with Fox 5, Bastian explained that a significant portion of Delta Airlines staff is in fact already vaccinated.

“We’re almost 75 percent vaccinated already,” Bastian said, “and if you think about that, you have probably some portion — maybe call it five to 10 percent of our employee base — that is going to have some medical or religious reason why they’re not getting vaccinated, you’re really down to a relatively modest number, maybe 10 to 20 percent of the unvaccinated, that you can drive with a mandate.”

Back in May, Delta Airlines became the first major U.S. airline to introduce a vaccine mandate for all new hires only, a decision that was also taken by United Airlines two months later in mid-June.

By not opting for a vaccine mandate for all employees, American, Delta, and Southwest Airlines have set themselves apart from other major U.S. competitors who have already made vaccination compulsory for all their staff.

On August 6, United Airlines announced that all of its 67,000 U.S.-based employees would have to get vaccinated against COVID-19 and show proof of vaccination either by October 25 or five weeks after the full approval of the Pfizer, Moderna, or Johnson & Johnson vaccines by the FDA (whichever comes first) or risk termination.

In doing so, United Airlines became the first U.S. airline to impose a vaccine mandate on all its employees.

United Airlines’ CEO Scott Kirby talked about the “incredibly compelling” evidence of the vaccines’ effectiveness in a letter he wrote on August 6 to United Airlines employees where he made known his decision whilst acknowledging the controversial aspects of this policy.

“We know some of you will disagree with this decision to require the vaccine for all United employees,” said Kirby, who justified this measure by describing the vaccine mandate as a safety measure.

“The facts are crystal clear: everyone is safer when everyone is vaccinated,” said Kirby.

Other airlines quickly followed in the footsteps of United. Within a few hours of Kirby’s announcement, Honolulu-based Hawaiian Airlines and low-cost carrier Frontier Airlines both announced COVID vaccine mandates for their employees.

Going for the same rhetoric of safety used by United Airlines, Hawaiian Airlines CEO, Peter Ingram, stated in a memo sent out to his employees, “There is no greater demonstration of our values than ensuring the safety of others.”

Ingram has said Hawaiian Airlines employees will have to be fully vaccinated by November 1st.

Frontier Airlines gave its employees even less time and set the deadline to October 1st. The low-cost carrier is even offering incentives for passengers to receive the vaccine and has updated its “Friends Fly Free program” which has now become the “Friends With Vaccines Fly Free” program. The program advertised on Frontiers website reads:

“Vaccinated Discount Den® Members have exclusive access to our Friends Fly Free sale! Buy one Discount Den Fare and get one free for passengers traveling together on the same itinerary.”

Similar incentives and bribing techniques have been used by other airlines with passengers and staff alike. For example, employees at American Airlines are being offered an extra day of vacation in 2022 provided they get vaccinated before the end of the month.

Other airlines have indicated that they are considering making vaccination mandatory for their staff. Last Wednesday, Seattle-based Alaska Airlines sent out a memo to its employees which read:

As an employer with a duty to keep you safe and given the contagiousness and health risks of the COVID-19 virus and its variants, we are within our rights to make this decision and to ask you for information about your vaccine status.

Airlines requiring their staff to be vaccinated have said they are accepting exemptions under medical or religious grounds, though employees who qualify for these will still have to undergo regular testing for COVID-19. United Airlines also requires all non-vaccinated employees to wear masks at company offices.

In view of the increasing number of airlines making vaccination mandatory for their staff, as well as recent steps taken by Canada and other nations around the world to impose COVID passports even for inter-state travel, concerns remain, of course, about whether airlines will at some point make vaccination mandatory for passengers as well as for staff.

Unvaccinated passengers would then have to file and qualify for medical or religious exemptions or be refused travel. They would also be subject to COVID-testing, mask mandates, and long quarantines upon arrival, where vaccinated people would not.

Some airlines may even go as far as separating the unvaccinated from the vaccinated in the cabin. This is even more plausible in view of measures that are already in place at some airports where vaccinated and unvaccinated have to wait in separate lines at customs.