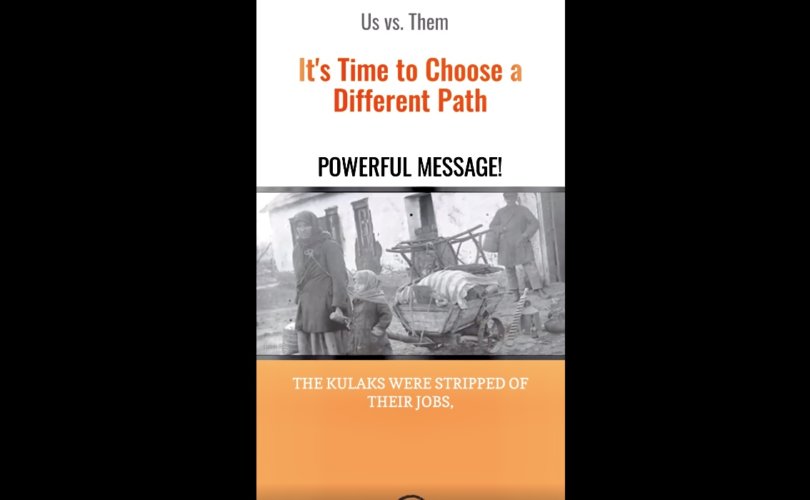 (LifeSiteNews) – Canadian alternative media outlet WholeHearted Media released a video through its Instagram channel laying out the human rights dangers that could arise from the implementation of vaccine passports. According to the video, “Vaccine passports could literally lead to rivers of blood.”

The video is presented by Israel Gimba, a Christian evangelist who gave his opinion on historical events that he believes are reminiscent of the current situation in Canada and around the world.  He began the presentation by talking about the plight of the Kulaks under communist dictator Joseph Stalin.

The term Kulak historically refers to wealthy members of the agricultural-peasant class in the regions included in the former Soviet Union. They were a well-respected group in their community that was capable of hiring and paying employees and lending money it needed. They were not socialists or communists, thus the Soviet Union considered them enemies of the state.

The presenter of the video explained that the communists declared an “us versus them” mentality regarding the Kulak population as a way of “liquidating” the group. They were to be deprived of their social status and ripped of their property through coercive measures. Within a short time, the group of wealthy peasants was persecuted heavily through policies that led to economic hardship and alienation from family.

Those who did not relent to the totalitarian agenda of the USSR were sometimes executed, and often exiled to remote regions of Russia. Many Kulaks starved as a result of the policies, and it is argued that the mismanagement of oppression of the agricultural class contributed to the Soviet Famine that killed millions of people in the USSR in 1932-33.

Gimba then goes on to link the movement of class segregation in Europe to the rise of Adolf Hitler in Germany. Under the Nazi Party, countless Jews and members of other groups were subject to oppressive measures and gruesome deaths as a result of government-sanctioned treatment.

Jordan Peterson explained how Hitler used public health momentum to implement a series of measures in order to ostensibly fight Tuberculosis – a respiratory illness – that he believes paved the way for the corraling of German citizens in concentration camps.

The video then went on to mention the assassination of Rwandan president Juvénal Habyarimana and Burundian president Cyprien Ntaryamira, both members of the Hutu ethnic group. This incident was at the heart of the movement that became the Rwandan Genocide, which lasted about 100 days, and the number of Tutsis murdered is estimated at more than half a million.

Rwandans were divided into ethnic groups by the Belgian colonial government in 1932-33, an action that historians believe contributed to the brutal genocidal mentality. The policy introduced a rigid racial concept of group identity. The segregation mentality stuck in the Rwandan nation and continued in the post-colonial era.

People carried around group-identity cards that showed their status as members of a particular group. During the genocide, militias would check these pieces of identification in order to know who to slaughter.

One website dedicated to the memory of the Rwandan people slaughtered in the genocide claims that “junk science” was at the heart of the murderous moment in history. Eugenics was introduced by the Europeans in the early 1900s, which was the same time that the pseudo-scientific idea swept across Europe.

There is growing evidence that the measures governments have enacted with the aim of battling COVID-19 have resulted in great harm to many people. Vaccine passports have not been scientifically proven to stop the spread of COVID, and the vaccines themselves have been shown to cause illness and death in thousands of people, with evidence growing daily that the harmful effects of the shots might be worse than imagined.

Today in Ontario, vaccine passports have been introduced, segregating millions from their neighbors by way of government policy. Masks and distancing are still required in business and establishments where the vaccinated are allowed to enter, just as they were before the policy began.

Dr. Joseph Mercola believes that the vaccine passport policies contradict sound reason and scientific data. As a result, he wrote, “Since COVID shots do not prevent infection or spread of the virus, and COVID-jabbed individuals carry the same viral load when symptomatic as unvaccinated individuals, the argument that vaccine passports will identify and separate “public health threats” from those who are “safe” to be around simply falls apart.”

The presenter in the WholeHearted Media Instagram video urged Canadians to refuse the vaccine passports in order to “help to stop the repeat of history.” He stated that “the vaccine passports are no different than the stars that Hitler gave Jews,” referring to the Star of David that was to be worn by Jews in Germany in order to identify their race and ethnicity as being separate from non-Jews.

He also compared the vaccine passport policy with the Rwandan policy that identified the group to which citizens belonged. He “These passports will make a majority of people superior over a minority,” he said, “they will literally create ‘us versus them.’”

He appealed to Canadians to stand up to the passport measures and claimed that “this is not who we are … we don’t create enemies of our brothers and sisters.”