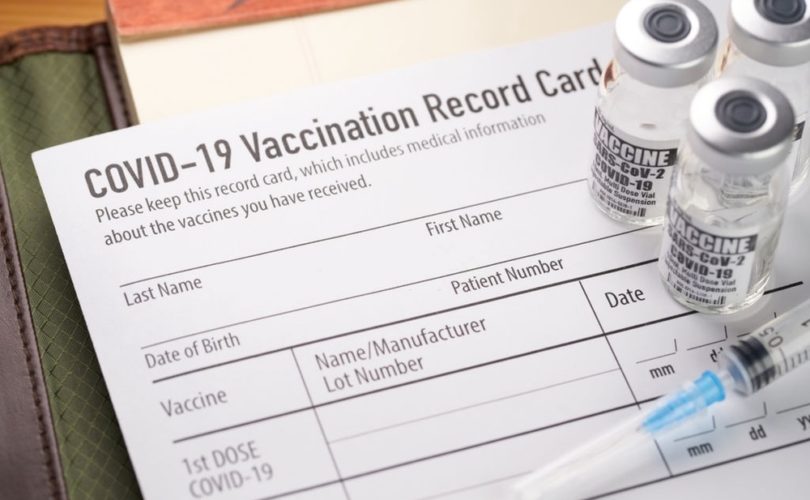 April 7, 2021 (LifeSiteNews) — Conservative American politicians are sounding the alarm about the future of COVID-19 vaccine passports, which have already been issued by the state of New York and are being developed by the Biden regime, as well as numerous governments and public and private organizations worldwide.

“Proposals like these smack of 1940s Nazi Germany. We must make every effort to keep America from becoming a ‘show your papers society,’” Rep. Madison Cawthorn (R-NC), told Fox News. “The Constitution and our founding principles decry this type of totalitarianism.”

“America faces a dangerous future when its leader’s ideology shares more commonalities with Leninism than liberalism,” he continued.

If you support a Vaccine Passport, then I know exactly what side you would be have been on in 1920’s Russia or 1930’s Germany.

While the White House claims there will be no mandated vaccine passports, a division within the U.S. Department of Health and Human Services (HHS) predicts that “vaccine credentials” will become a “de facto requirement” to participate in ordinary activities.

“From a Federal perspective, vaccines and vaccine credentials are matters of individual choice — there is no mandate for either. However, current trends suggest that vaccine credentials could nevertheless become a market-imposed de facto requirement for an individual’s return to day-to-day activities,” stated a slide from a Federal Health IT Coordinating Council meeting obtained by the Washington Post.

It continues, “Ubiquity of vaccine credentials in market could become perceived as a Federal mandate even though there is none, thus it will be vital for the Federal government to communicate with one voice on the issue.”

The White House is reportedly working with multiple government agencies, along with technology and travel companies, to develop a “uniform proof-of-vaccination” system that is “expected to be available through smartphone applications for free.”

According to the Washington Post, the White House is deliberating about how to “avoid the perception of a government mandate to be vaccinated.”

In January, Biden signed an executive order directing the government to evaluate the “feasibility” of vaccine passports.

Florida governor Ron DeSantis issued an executive order banning both public and private entities from using vaccine passports. His order, which freedom-supporting Americans have cheered, warns that requiring “so-called COVID-19 vaccine passports for taking part in everyday life — such as attending a sporting event, patronizing a restaurant, or going to a movie theater — would create two classes of citizens.”

If you’re a republican in office and you’re not vocally and aggressively opposing “vaccine passports” it may be time to find another career.

This concept could be the greatest affront on our freedoms in recent history and if you don’t see that it’s a problem.

Donald Trump, Jr. said vaccine passports “could be the greatest affront” to “our freedoms in recent history.”

“We have constitutional rights and health privacy laws for a reason,” said Pennsylvania House Majority Leader Kerry Benninghoff, a Republican. “They should not cease to exist in a time of crisis. These passports may start with COVID-19, but where will they end?”

“Vaccine passports” must be stopped.

Accepting them means accepting the false idea that government owns your life, body and freedom. pic.twitter.com/nmlP2SN6iw

Meanwhile, Democrats who support vaccine passports for access to everyday activities while opposing ID requirements for voting are being criticized for hypocrisy.

I have one question for the vaccine ID passport nazis…

will you require these in order to vote?

House Judiciary Committee ranking member Jim Jordan, R-Ohio, called out the Biden administration on Twitter for “Considering a ‘vaccination passport’ for Americans,” while it “doesn’t seem to care about passports when it comes to illegal migrants crossing the southern border.”

-Considering a “vaccination passport” for Americans.

-But doesn’t seem to care about passports when it comes to illegal migrants crossing the southern border.

Numerous countries have either introduced vaccine passports, or are considering introducing them. Most recently, E.U. Commissioner for Internal Market Thierry Breton said the European Union’s brand-new “Digital Green Certificate” — or “sanitary certificate,” as he called it — has been approved by the 27 E.U. member states and will be released on June 15. Which activities will require the certificate, such as traveling, reportedly will be left up to the member states.