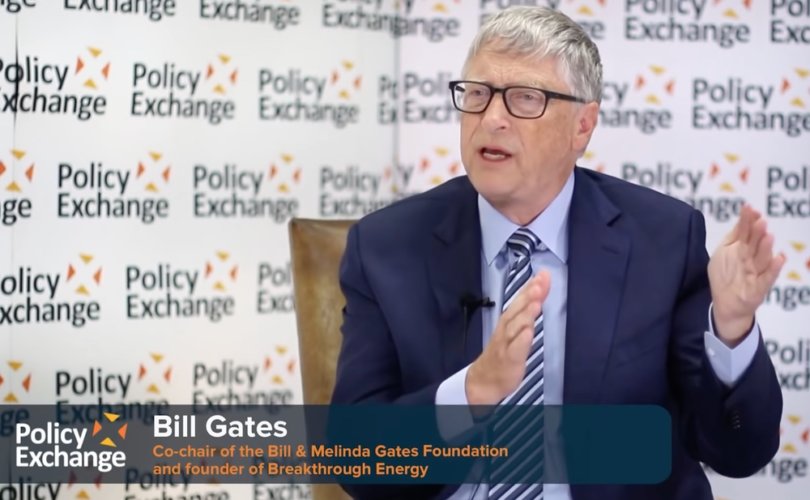 In a wide-ranging 30-minute interview with leading British politician Jeremy Hunt, head of the U.K. Health Select Committee, Gates discussed many of the topics debated at the COP 26 climate summit underway in neighboring Scotland, later in the interview turning his attention towards “pandemic preparedness” and the current global COVID shot rollout.

Gates told Hunt that “we didn’t have vaccines that block transmission” regarding the available remedies for the virus at the onset of the crisis, later saying of the abortion-tainted COVID jabs, “we got vaccines to help you with your health, but they only slightly reduce the transmissions.”

“We need a new a new way of doing the vaccines,” Gates, who has been a prominent pusher of the shots, added.

Despite being one of the largest proponents of presently-available COVID-19 vaccines, Gates admits to the failure of the vaccine industry that he has worked so hard to prop up.

On September 29, YouTube announced that it would be implementing a stricter clamp down on content which alleges any kind of failure of the “approved vaccines” for COVID-19.

YouTube clearly stated that “claims that vaccines do not reduce transmission or contraction of disease … will be removed.” Though the video of Gates’ interview has been published on the platform for almost a week, there is yet no indication that it will be removed for directly contravening YouTube’s strict “harmful vaccine content” rules.

Gates stressed the importance of suppressing what he called “false information” surrounding the novel coronavirus and the accompanying government approved “vaccines.” He lamented the rise of so-called “mask hesitancy” and “vaccine hesitancy” among those who choose not to don the coverings or subject themselves to the experimental shots.

Instead of relying on social media to regulate “what stuff should circulate” online regarding scientific discussions on medicine and COVID shots, Gates suggested that governments ought to “step up” to control censorship of online media after criticizing platforms like Facebook for being “a little slow” to bring down the hammer.

Continuing, the technology mogul heaped yet more opprobrium on social media giants, mocking their motivations regarding content publishing as being far from virtuous, while at the same time advocating for governments to take over the policing of internet discussions.

Arguing that it is not “realistic” to expect Big Tech to moderate heavily enough, Gates suggested that “eventually governments will decide [on supposed] wild conspiracy theories: do they have to be double checked? Do they have to slow down their spread? Do you have to put counterbalancing point of views there?”

Gates called for a “pandemic task force at the WHO [World Health Organization]” which would carry out simulations of bioterrorism attacks at airports, he said, for example. “You say, okay, what if a bioterrorist brought smallpox to 10 airports? You know, how would the world respond to that? There’s naturally-caused epidemics and bioterrorism-caused epidemics that could even be way worse than what we experienced today.”

The task force would require “tens of billions” of dollars in investment from the world’s nations to prepare for the possibility of a manufactured bioweapon, Gates suggested.

“So you’d think this would be a priority,” he said, predicting that “next year will be where those [financial] allocations have to get made, including this global pandemic task force.”

Although now seemingly deriding the COVID shots, the technology tycoon has previously been noted for his vehement defense of the injections, pushing governments to get needles into the arms of their citizens, and advocating for endless booster jabs, similar to the flu shot.

Last April, the mogul said in an interview that life after COVID-19 will not be the same until the population is “widely vaccinated,” advocating for the suppression of activities which require people to gather together and warning that, without accepting the jab, “those may not come back at all.”

In addition, Gates’ charity, the Bill and Melinda Gates Foundation, is behind vaccination programs worldwide, including the current global push for mass vaccination against COVID-19 using experimental mRNA-derived formulas, which Gates admits “no one had ever made” before now.

The Microsoft founder has been involved in the research behind the jab, in conjunction with Moderna and the U.S. government, and was indirectly involved with the development of the Pfizer-BioNTech jab, a company whose stock the Gates Foundation bought months before the discovery of COVID.

The Gates Foundation is also a big investor in Oxford University’s vaccine projects, having injected $384 million dollars. On top of this, the foundation has donated millions of dollars, through grants, to the university’s Jenner Institute, which is developing Oxford’s COVID-19 vaccine.

Kaiser Health News reported that Oxford had originally pledged to make its mRNA COVID vaccine open source, thus freeing the technology to be used by manufacturers without expensive licensing costs; after the Gates Foundation intervened, however, Oxford signed an exclusive license with AstraZeneca. Since then, both Oxford and AstraZeneca have said they will not take any profits from producing and distributing their vaccine “for the duration of the coronavirus pandemic.” Thereafter, they are not bound by this promise.

Though touted as a philanthropist, as a result of Gates’ involvement in developing the shots his foundation stands to profit enormously from their large-scale uptake, in spite of the enormous health problems that have arisen therefrom.

He claimed in a Wall Street Journal op-ed in 2019 that his investment on vaccine rollout programs is making a 20-to-1 financial return, turning $10 billion of investment into $200 billion of “economic benefits” for local economies over the twenty-plus years since first entering the health industry.