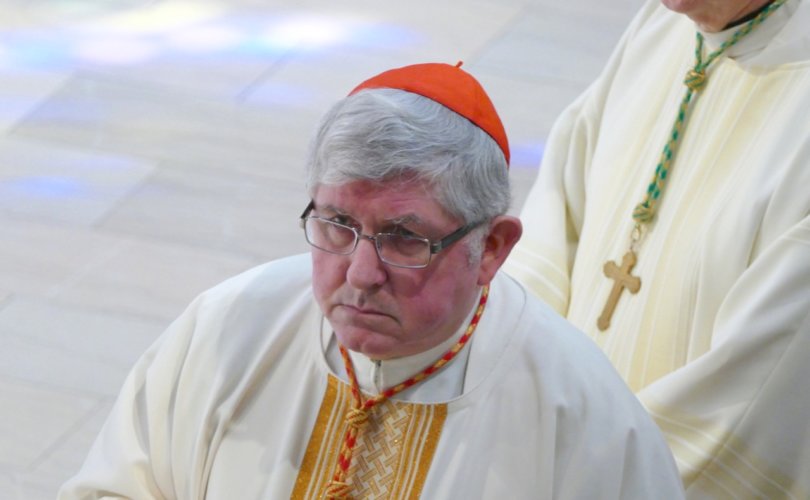 TORONTO, Ontario, April 16, 2021 (LifeSiteNews) – As coronavirus-related lockdowns and restrictions continue to oppress Catholics in Canada and infringe on the right of all people to freely worship, the Catholic Archdiocese of Toronto continues to avail itself of millions of government dollars in “COVID relief” subsidies.

This comes as Archbishop Thomas Cardinal Collins of Toronto has launched an aggressive campaign urging Catholics to receive abortion-tainted, experimental coronavirus shots despite the availability of much safer, effective treatments for the Wuhan virus such as Ivermectin, Hydroxychloroquine, zinc, and vitamins.

In his March 14, 2021 homily to an almost completely empty basilica, for example, Collins fretted about new “variants” of the virus which he claimed are “more contagious than the regular COVID.”

“One of the signs of hope that we’ve long been waiting for is vaccination,” he continued. “We need to vaccinate the population, obviously…[that’s] one of the most important ways in which we will be able to put this beyond us…I strongly urge everyone to get vaccinated. That’s, again, common sense.”

Receiving a coronavirus vaccine is a “wise and sensible thing” and an “act of charity,” he claimed.

The salary subsidies of which Collins’ archdiocese is availing itself are being offered by the Canadian government, which is responsible for imposing draconian restrictions on businesses. The subsidies are supposedly to help “re-hire workers, help prevent further job losses, and ease your business back into normal operations,” according to the Canadian government website.

Originally, the “Canada Emergency Wage Subsidy” (CEWS) was paying 75 percent of all staff wages to eligible organizations in order that such businesses would be able to continue to pay their employees whilst closing their doors to business. For the Catholic churches in the country, however, closing their doors to business meant suspending the public worship of God indefinitely.

The Archdiocese of Toronto, along with many other Catholic dioceses and charities in Canada, received money from the government, both national and provincial, to help fulfil its staffing expenses. A spokesman for the archdiocese reported a 68 percent drop in revenue in May 2020, their biggest recorded loss of income throughout COVID-related lockdowns.

During a September video conference on the Toronto Archdiocese’s finances, Michael W. Schuck, the Controller of Accounting and Finance at the Archdiocese of Toronto, updated the panel on the CEWS status in the archdiocese, informing the virtual committee that the archdiocese had been the beneficiary of a 75 percent wage subsidy from the national government scheme. Between March 2020 and August 2020, the archdiocese had netted a staggering $2.27 million dollars ($2.85 million CAD) every month for six months to pay staff wages, amounting to $13.6 million ($17.1 million CAD) for that short pay period.

Schuck recognized that, aggregating the six month payment period, the archdiocese had received “quite a bit back from the government.” He added that archdiocesan officials “are very grateful to them [the government] to be able to do that for us.”

Since May’s financial low point, Schuck said that the archdiocese had gradually recovered much of its losses from the plate, “as a result of very generous donors,” explaining that, despite the suspension of public Masses, the revenue of seventy parishes, around a third of parishes within the archdiocese, “has increased year-over-year.”

After the August pay period, the criteria for wage subsidy claims changed from a flat rate to a percentage of the decline in reported revenue. This represented a “substantially reduced” rate from the six months prior, given that September’s year-on-year revenue disparity sat at a 17 percent decline across the archdiocese, Schuck explained.

Acknowledging the reduced payments, Schuck said he “knew it was coming and we have asked the parishes to take proactive moves in terms of cost containment in recognition of that [reduced subsidy],” including cutting jobs.

LifeSiteNews requested release from the archdiocese for its 2020 year finance reports, but received no response before time of publishing.

Due to the dependency of Catholic dioceses on government financing, some notable Catholic commentators have warned that the Catholic hierarchy may now find itself beholden to the government, in addition to acquiescing to demands for church closures to remain the beneficiary of generous grants and subsidies.

LifeSiteNews co-founder and managing director Steve Jalsevac observed that the Archdiocese of Toronto “has tended to move further and sooner than required by the government” to close churches and suspend worship throughout the coronavirus outbreak.

Jalsevac noted that officials within the diocese have been “extremely weak in insisting that Church worship and other activities be considered essential services,” and thus might be permitted to continue unadulterated, adding that the “government has no real authority over religious services and practices.”

“By constantly self-restricting these services the archdiocese has itself set precedents for the state to have more authority over the Church than it is actually due. The Catholic population has subsequently been deprived of the all-important sacraments and spiritual nourishment that they severely need during such difficult times,” he continued.

Jalsevac criticized the priests and bishops responsible for withholding the sacraments from the faithful while, at the same time, accepting large public pay-outs as “cowardly shepherds” who have responded in “exactly the opposite” way to how they ought. In fact, Jalsevac related that “many priests have for decades learned to refer to the chancery as ‘head office’ because it is run more like a business corporation than a religious organization dedicated to saving souls.”

Indeed, “for decades the hierarchy has been strongly warned by the most faithful Catholics to not accept any money from government for any reason because this always comes with major strings attached,” he said. “This dependency on secular government funding has indirectly led to a dramatic weakening of the evangelistic spiritual mission of the diocese.”

Jalsevac explained that the Toronto Archdiocese does not defend the rights of the Church “out of fear of losing funds if any of the programs in any way contradict state ideological positions on especially moral issues, and the special religious protections that the Church has had since the founding of Canada and in its Charter of Rights and Freedoms.”

“The faithful laity are usually ignored and frequently rebuked for asking that the diocese place its spiritual and moral mission far above the demands that the government imposed as a condition for continued funding for church programs,” he lamented.

In the U.S., Catholic dioceses too have been funded by the government at the expense of suspending public worship. The total income from “COVID relief” packages to American dioceses, which all locked their doors and banned public Masses during the spring of 2020, reportedly amounts to over $3 billion dollars since March 2020.

Father Michael Orsi, an outspoken pro-life priest of the Diocese of Camden, New Jersey, who currently serves as parochial vicar at St. Agnes Parish in Naples, Florida, told LifeSiteNews in February that he is worried that the “free aid money” will prove to come with strings attached.

“We gave them a sword in taking the money and I don’t see why they will not use it,” he said. “Accepting the money has put us in a moral and legal quandary.”

In an April 1 letter to the faithful of his diocese, Cardinal Collins announced that churches in his diocese would keep their doors closed to the majority of worshippers for the second year in a row during the Church’s most hallowed celebration, the Sacred Triduum, permitting only 15 percent of total church capacity to be occupied for services, in accordance with provincial guidelines.

In addition to restricting worship, Collins has strongly urged all members of the archdiocese to receive any one of the abortion-tainted COVID-19 vaccines currently available under Canada’s “Interim Order Respecting the Importation, Sale and Advertising of Drugs for Use in Relation to COVID-19.” During an April 8 address, the cardinal-archbishop instructed his diocese that the availability of such vaccines is “a sign of hope,” regardless of the use of aborted fetal cells in bringing the jabs to production.

Collins emphasized that he thinks taking the vaccine “is a very sensible thing to do,” and that it is “a very wise thing to get vaccinated because it is a protection for the individual and it also helps our whole community.” He went so far as to claim that being vaccinated against COVID-19 is “a service of the common good,” giving him the confidence to “strongly urge, encourage everyone to get vaccinated.”

“My message to one and all,” he concluded: “I urge you all to get vaccinated.”

Collins did not elaborate on whether he thinks people allergic to ingredients in the vaccines, people who went into anaphylactic shock after the first dose of a coronavirus vaccine, or pregnant women – who seem to be at an increased risk of miscarriage by taking the vaccines – ought to receive the experimental injections.

Famous Harvard-trained psychiatrist calls for ‘moratorium’ on COVID vaccines
‘The vaccine is much more dangerous than the disease.’

10,000+ deaths after COVID shots reported by U.S., European agencies
More than 7,000 deaths have occurred in Europe, and more than 200,000 injuries worldwide have been reported.

18 reasons I won’t be getting a COVID vaccine

The Leprechaun has no clothes: Notre Dame violates the Nuremberg Code of 1947