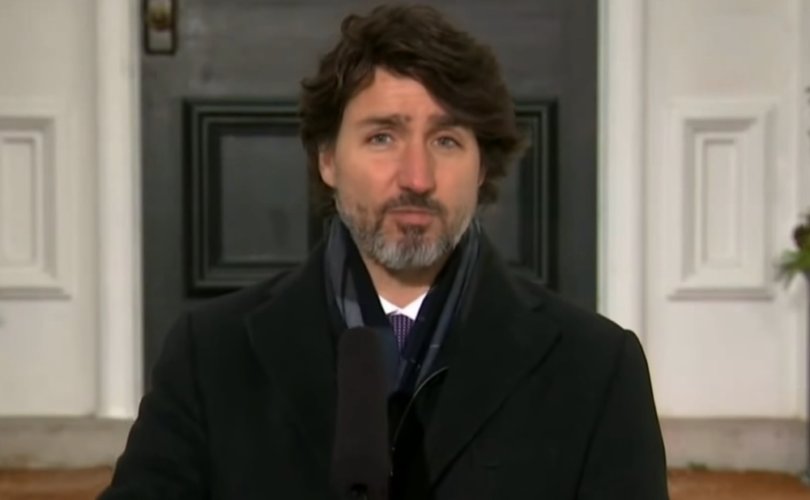 CANADA, March 3, 2021 (LifeSiteNews) – Canadian Prime Minister Justin Trudeau’s remarks that there are “pros and cons” to COVID-19 “immunity passports” shows that he has some openness to a measure that would ultimately violate “Canadians rights and freedoms,” a vaccine watchdog group is warning.

“The idea of immunity passports, such is one that has been talked about for a while, there are potential pros and cons that I’ve heard on various, various issues surrounding it,” Trudeau told reporters on February 26 during a press conference announcing Canada’s approval of the AstraZeneca COVID-19 vaccine. “Our position as a government is always going to be to rely on the best advice of experts in terms of how we can move forward,” he added.

However, Trudeau’s response to the question in French differed slightly from the English version. It notably included the phrase “negative consequences” for those who don’t have the passport.

“I think it’s something people have been talking about for a while now I think it’s important to follow recommendations from experts at every stage, there might be negative consequences if you want benefits but don’t have this health passport but we're going to follow public health recommendations,” said Trudeau in French as translated to English.

The president of a leading Canadian vaccine watchdog group told LifeSiteNews there is no “Medical Justification” for “immunity passports” in Canada, saying they would violate Canadians rights and freedoms if implemented.

“The real risk of ‘vaccine immunity passports’ is the violation of our rights and freedoms. The unstated intention of such a document would be used to restrict access to travel and services of those individuals not partaking in this medical experiment. Such arbitrary restrictions would be a clear violation of our inherent freedoms in Canada,” Ted Kuntz, president of Vaccine Choice Canada (VCC), a not-for-profit society founded by families who have suffered from vaccine reactions or injuries, told LifeSiteNews.

Kuntz stated that in considering vaccine “immunity passports” Trudeau is “demonstrating his support of coercive measures to compel vaccination upon unwilling citizens.”

“While this may not be a vaccine mandate in the strictest sense, it is effectively a vaccine mandate in practice. Any mandating of vaccines cannot be tolerated. Vaccination carries risks including permanent disability and death. Where there is risk, there must be choice,” Kuntz told LifeSiteNews.

Kuntz also mentioned that there is “no medical justification for implementing ‘vaccine immunity passports’” in Canada.

“To do so fails to recognize the limitations of vaccine-induced immunity, and the COVID vaccines in particular. The assumption Trudeau makes is that vaccination equalizes immunization. This is not the case,” Kuntz told LifeSiteNews.

In January,  Trudeau said his government did not plan to implement COVID-19 “immunity passports” in Canada, saying at the time they are “an interesting idea” but could have “real divisive impacts” and is “fraught with challenges.”

COVID-19 “immunity passports” have been welcomed by some European Union countries such as Sweden and Denmark.

Recently, the president of the European Union Commission Ursula von der Leyen said she is behind an EU-wide “vaccine passport” program.

At the provincial level in Canada, the idea of COVID-19 “immunity passports” was raised in Ontario in late 2020.

In December of 2020,  Christine Elliott, the health minister of Ontario reaffirmed a second time that residents of Canada’s most populous province will need “for lots of reasons” a yet-to-be-determined type of proof that they received the COVID-19 vaccine.

In April of 2020, Trudeau said that he would need time to “reflect” on the possibility of making a coronavirus vaccine mandatory in Canada.

There are questions as to whether a vaccine “immunity passport” would violate the Canadian Charter of Rights and Freedoms, in particular Section 2, which involves one’s conscience rights; Section 6 regarding mobility rights; and Section 7, which protects one’s “right to life, liberty and security of the person.”

Lisa Bildy, a lawyer for the Justice Centre for Constitutional Freedoms (JCCF), told LifeSiteNews last year that for a government to “threaten or mandate liberty restrictions” against Canadians who do not want a COVID-19 vaccine is indeed a violation of one’s charter rights.

“The government should make the Covid-19 vaccine available to all Canadians who want it, starting with those who are the most vulnerable. That should be the end of their involvement in the personal health decisions of Canadians,” Bildy told LifeSiteNews.

“To do otherwise, and particularly to threaten or mandate liberty restrictions on Canadians who make the perfectly reasonable assessment that they do not need or want such a vaccine, is a violation of the rights to freedom of conscience and belief, mobility rights, and the right to life, liberty and security of the person under the Charter. If there’s no solid data on transmission, then there is simply no rational basis for the infringement of these rights.”

Other freedom groups speak out against ‘immunity passports’

Objections to “immunity passports” for COVID-19 vaccines have been raised before in Canada by groups other than the JCCF or VCC.

The group called them a “wrongheaded” solution which if implemented could end up dividing people into “categories” causing “abuse, discrimination, and oppression.”

Currently, there are three COVID-19 vaccines approved for use in Canada. The Pfizer and Moderna vaccines, which both are abortion-tainted, were approved months ago.

The abortion-tainted vaccine from AstraZeneca was just recently approved for use in Canada for those over 18 despite Canada’s National Advisory Committee on Immunization saying it should not be given to those over 65.

In December of 2020, Health Canada put out a warning to Canadians that they should avoid the Pfizer jab if they are allergic to any of its listed ingredients.

About a month ago, the Trudeau government announced that they had signed a deal with pharmaceutical giant Novavax, to permit them to make its abortion tainted COVID-19 vaccine in Montreal.

At the same press conference announcing the deal with Novavax, Trudeau also said that he had signed another deal with Precision NanoSystems.

Trudeau said during the announcement of the Novavax and NanoSystems that “Vaccines work,” and also that they are “safe and effective.”

“When it’s my turn, I’ll be ready to roll up my sleeve and get my doses. These vaccines save lives, so I hope you’ll join me,” said Trudeau.

As for the VCC, in the summer of 2020, they announced a lawsuit against Trudeau’s Liberal Government along with Ford’s Government of Ontario to hold them “accountable” for their “overreach and the draconian and unjustifiable measures taken in response to COVID-19.”

The group also said it is seeking that the defendants do not force any mandatory COVID-19 vaccine on Canadians as it would violate one’s rights under the Canadian constitution.